6 Ways to Level Up Fast in Fortnite

Fortnite Chapter 2 Season 5 is out and there’s a metric ton of awesome content to explore and unlock. As is the case with every new season, players are scrambling to level up as fast as they can to get all the amazing skins and goodies.

The Battle Pass is one of those treasure houses that have a variety of new skins, add-ons, back bling, and a whole lot more to unlock. But you can’t just do it without a plan; you’ve gotta be smart about it.

All of the rewards and unlockables require you to reach high ranks, some as high as 100. Well, here’s a list of tips and tricks that can help you get to level 100 and beyond.

Related: What is Gaming Legends Series in Fortnite?

Leveling up fast in Chapter 2 Season 5

Leveling up doesn’t always have to involve playing from dawn till dusk and deep into the night. Sometimes, you have to be a little strategic, keep your pockets loose, and keep an eye on what’s happening currently in the Fortnite community. A good combination of the following methods should ensure that you level up in no time and unlock all that you want.

Okay, maybe this isn’t the most cogent solution, but spending V-bucks can actually be a huge help. One has to purchase the Battle Pass anyway, so why not spend a little more and level it up further?

Paying to unlock one Battle Pass level will cost 150 V-bucks. But if you want to quickly unlock 25 bonus levels at once, you only have to spend 1850 V-bucks. However, one thing players have to keep in mind while doing this is that they have to be under level 75 for this deal.

Even though this is not a cheap alternative by any stretch of the imagination, 25 levels is a lot if you want to quickly level up and get rewarded.

Related: Where Are the Bosses in Fortnite Season 5

2. Grind it out on Quests

Challenges have been replaced by quests and completing them successfully can boost your XP by quite a bit. To find the quests, navigate to ‘View Quests’ on the Play tab and grind them out as fast as you can. 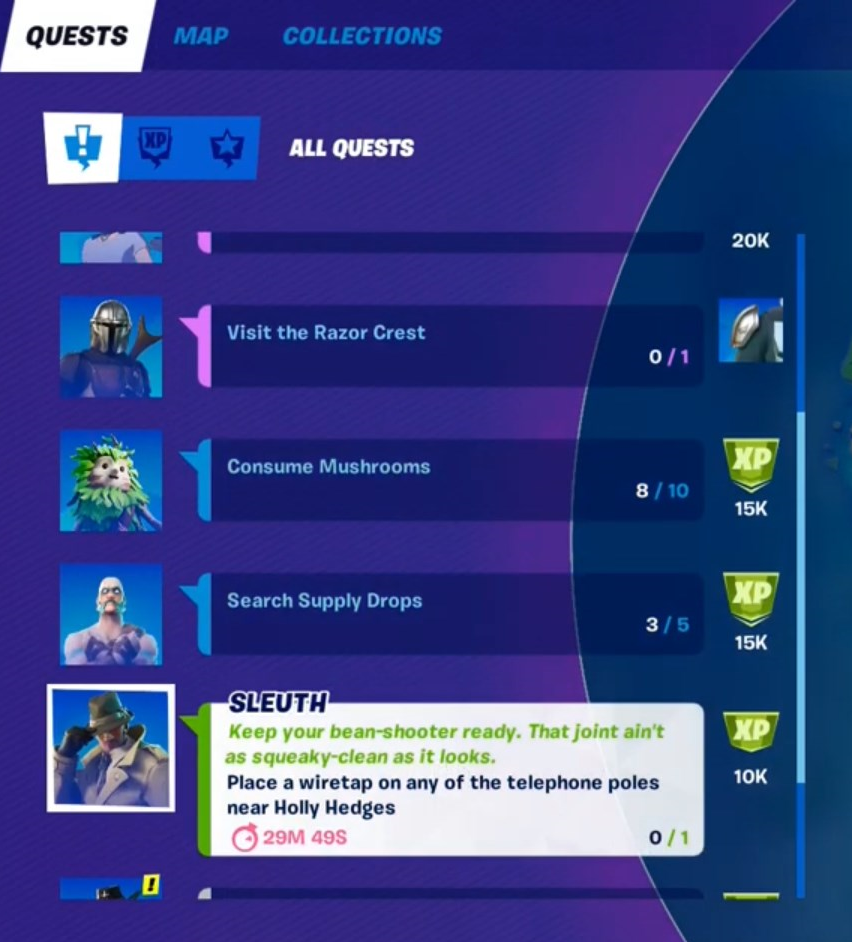 Of course, how quickly you’re able to complete these will depend on how well you play, so make sure you bring out your A-game, play diligently, and put in the hours to up your game. XP will be earned for every kill and assist (when you’re part of a team) so make sure you get as many as you can without getting killed. Also, the higher your rank is at the end of a match the more XP you will earn.

Depending on the quest that you’re striving to complete, you can earn anything from 1000 XP all the way to 50,000 XP on a single quest.

Related: How to Earn Weapon Specialist Accolades in Fortnite Season 5

To quickly earn 10,000 XP, try to complete the Limited-Time Daily Quests. The multi-step weekly quests, on the other hand, can take some time to finish but the amount of XP that you get is going to be massive.

3. Venture into the Unknown (Explore the Map)

You should be looking to get out of your comfort zone, explore the map, and clear the fog of war. Visit as many named locations as well as POIs on the map and find out what’s new.

Doing this will earn you a decent amount of XP. When you discover new named locations, you’ll receive a little under 10,000 XP. On the other hand, discovering POIs will get you a few thousand XP.

All that XP you get just by roaming around adds up eventually. Epic Games will often add new POIs or change the locations throughout the season which will require you to visit them again. This too will net you some XP.

Getting XP coins that are scattered around the map will give a much-needed boost to players in Fortnite. This has been a thing for quite a while and fortunately, Epic Games hasn’t got rid of it yet. Players can find these XP coins every week and get a decent XP boost.

Apparently, there are about 15,000 XP to be gathered passively in such a manner. You will be notified with a pop-up in the top left-hand corner of your screen whenever you make progress on these challenges. Players can thus keep count of what all they’ve done and what all they need to do to grind it all out and get that 15,000 XP which is well worth it.

Related: How To Get Lexa Skin in Fortnite

Glitches in the game are inevitable, especially when a new season has just released. These allow players to ramp up their XP by insane amounts making them the easiest way of leveling up. In the previous Fortnite seasons, players have had to jump up and down in a specific spot or engage in some other absurd activity for the glitch to work.

But one glitch in season 5 that has been found is super easy to do. For the glitch to work, players have to visit Weeping Woods.

Once there, just run back and forth in a small area, going in and out of it.

Players earn 8000 XP over and over for discovering the location. In theory, they could generate an infinite XP just by running in that area.

On the first day of the season, players used this glitch to level up in a ridiculously small amount of time, reaching as high as level 300. As of yet, there’s no telling if players who’ve used this trick will be reverted back to their previous levels, or whether their accounts will be banned or not.

Once Fortnite got wind of this glitch, the challenge was disabled temporarily.

Experience gained by discovering locations has been re-enabled. To make up for missed XP, all players will be awarded 50,000 XP at a later date. pic.twitter.com/TtasxElCjZ

When it came back later, the glitch was patched. But here’s the good news – every single player will receive 50,000 XP to make up for the lost time, scheduled to be credited at a later date.

That’s all there is to it. Gaining XP from all these methods does add up, even though it may seem like some of them only provide a paltry amount at first. We recommend doing all of these to ensure that you inch closer to the 100 level mark and even go beyond it. You’re bound to be rewarded handsomely for your endeavors.

What is Creative XP Glitch in Fortnite?