Update [October 27, 2017]: The latest update of 2.17.395 brings redesigned set of emojis, live location sharing and Delete for everyone features.

Update [July 13, 2017]: The latest update of 2.17.254 lets you share all types of files on WhatsApp. The update makes it easy to format the text. Now just tap and hold the text to easily bold, strikethrough, or italicize it.

Update [May 17, 2017]: The latest update that bumps the version number to 2.17.190 introduces chat pin feature for the stable version. We had seen chat pin in WhatsApp beta update of 2.17.162. Similar to Beta version, you can pin 3 chats to the top. To know more about chat pinning in WhatsApp, click here.

Update [April 18, 2017]: WhatsApp has received a new update that pushes the build version to 2.17.146 and introduces a feature that allows users to send multiple contacts at once. Earlier, you could only send one contact at a time, but now the story has changed. In addition to sending multiple WhatsApp contacts, you can now share all the contact cards of your device, whether it is a WhatsApp contact or just an email id. Also, the latest update lets you share GIFs with Google’s Gboard keyboard. There has been no change in the built-in GIF library of WhatsApp. This is just an additional feature that you get. However, the feature is limited to devices running Android 7.1+.

Update [April 29, 2017]: The latest update of WhatsApp Beta (v2.17.162)  brings the much-awaited feature of pinning chats. You can now pin a chat and it will appear on top of the chats list.

Update [April 21, 2017]: WhatsApp Beta has received a new update that adds new features to the built-in video editor. Earlier you could only create a GIF and trim the video from the video editor, but now, similar to the new Status, you can add sticker and text on top of your videos. Moreover, you can even doodle on the WhatsApp videos.

Update [April 13, 2017]: WhatsApp last year introduced rich formatting that allows users to format text by making it bold, italic and strikethrough. Liked by all, the formatting feature, however, had one drawback. You had to remember the codes to format the text such as add an asterisk (*) before and after the specific words you want to embolden e.g. *hello*.

However, thanks to the latest WhatsApp beta update of 2.17.148, you don’t need to remember the codes. WhatsApp has introduced new shortcuts that allow you to format your text and change the font, without remembering any of the codes. Although, if you are used to writing the codes, the old method still works.

So, where are the shortcuts? Here, you go.

Type the message in WhatsApp typing area and long touch on any word or phrase that you want to format. You will get the regular options like cut and copy. However, you need to tap the three vertical dots to view the shortcuts. Scroll down to find other options like Bold, Italic, Strikethrough and Monospace font. Tap on the option that you like, to activate it. That’s all you have to do now. 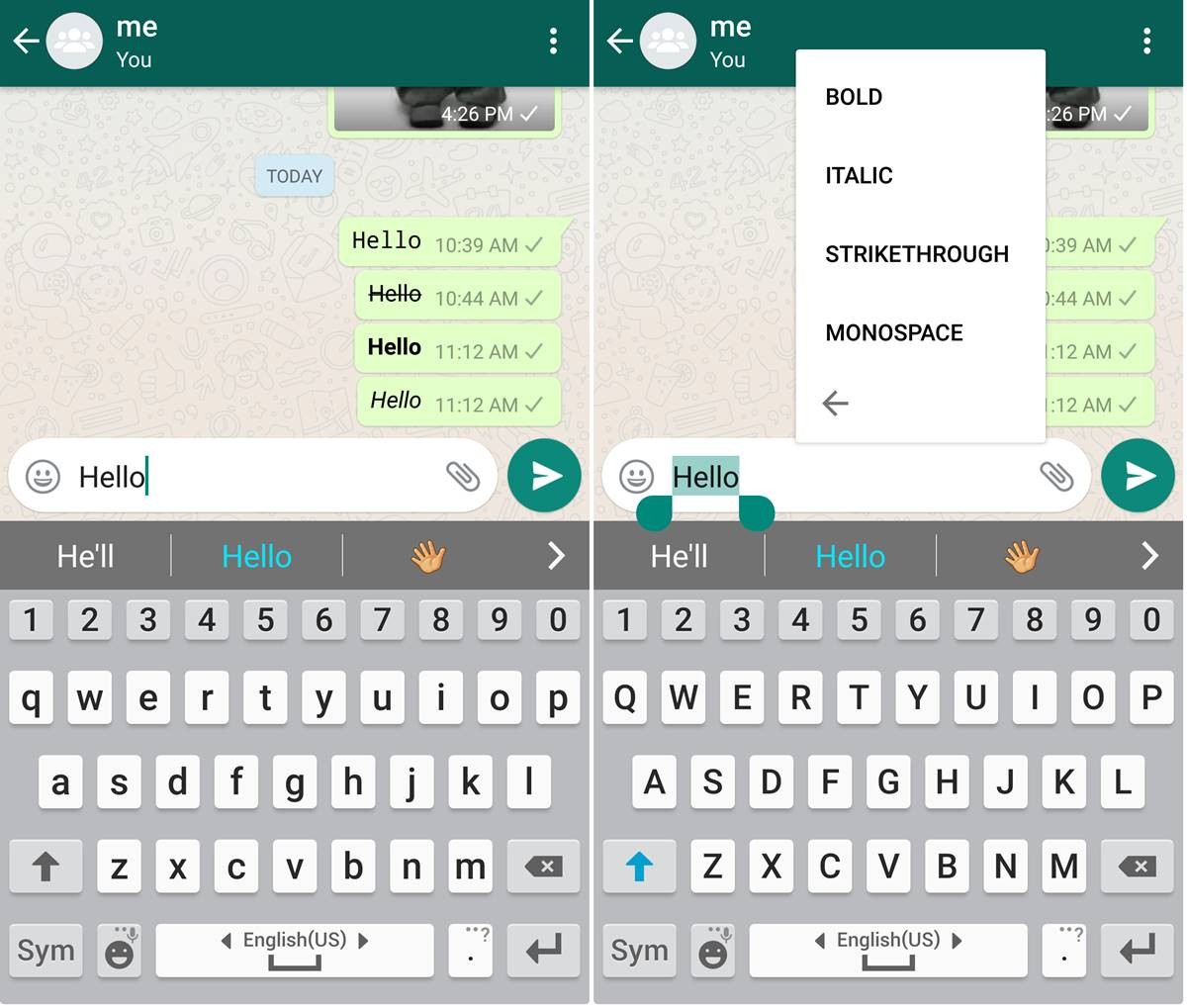 The popular messaging service, WhatsApp, in addition to texting allows you to make free audio and video calls. WhatsApp also lets you send voice messages and share documents up to 100 MB.