Huawei Nova 3 and 3i: All you need to know

At an event held in New Delhi on 26 July 2018, Huawei took the wraps off the Huawei Nova 3 and Nova 3i, two phones that are closely related but with their own differences that set them apart. The duo had already been launched in China by the time of the Indian launch, meaning we already knew about what we are up against from the onset.

If, however, this is the first time you’ve come across the Huawei Nova 3 and Nova 3i or would simply want to know what the pair is all about, we have all you need to know in this post, beginning with the specs.

Huawei Nova 3 and 3i specs

Just like their names, the Nova 3 and 3i have some other similarities between them. One notable one is the design, where you find the same approach used on the Huawei P20 that includes a notched display screen with minimal bezels and an aspect ratio of 19:9. Although the storage is the same amount on both handsets and they also support microSD card storage, there’s a difference of 2GB in the amount of RAM used.

Another spec similarity is the front-facing camera, where you get a dual 24MP + 2MP setup on both handsets. The second sensor, as you’d expect, is meant for depth sensing effects. As for the main shooter, the Nova 3 gets a superior package that includes a wider aperture of f/1.8 and PDAF on both sensors while the Nova 3i settles for an aperture of f/2.2 and a secondary depth-sensing lens.

While the duo has the same footprint, you get a smaller 3340mAh battery unit in the Nova 3i compared to the 3750mAh unit used in the Nova 3. Although it’s certainly not the smallest battery we’ve seen on any 6.3-inch smartphone, what could a deal breaker for some is the decision to go with a microUSB port on the Nova 3i instead of the same USB-C port you find on the premium Nova 3. Still, both phones get some form of fast charging technology but expect better performance from the latter.

In terms of software, the two have the same EMUI 8.2 running on top of stock Android 8.1 Oreo. Despite their disparities, the duo will be upgraded to Android P, probably before the end of the year (for the Nova 3) or early 2019 (for the Nova 3i). The two support what the company calls AI Shopping, a feature that lets you shop for items by using the image or camera for that matter. All you have to do is long press the image of an object using two fingers to scan and shop on Amazon.

The Huawei Nova 3 further includes support for infrared face unlock that should even work in poorly lit conditions, but both have the company’s GPU Turbo technology out of the box. Other extras aboard the two phones include the 3.5mm audio jack, Bluetooth 4.2, LTE, dual-SIM connectivity, etc.

Huawei Nova 3 and 3i price and availability 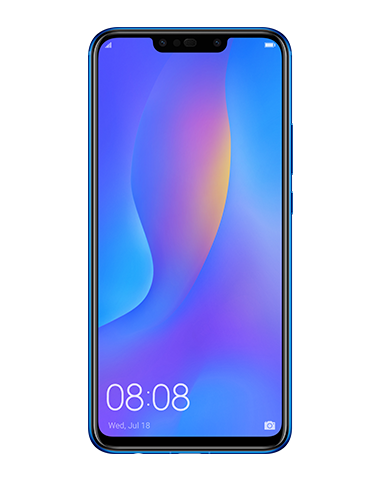 We already pointed out that the Huawei Nova 3 and Nova 3i were launched in China before going official in India. It’s unlikely that India will be the last market outside of China to see the Nova 3 duo, but we cannot guarantee that the two will come to your local market with the same names.

In short, the Huawei Nova 3 and Nova 3i may see a wider release, but they may adopt different names in other markets. In India, the former has a price tag of INR 34,999 (about $510) while the latter can be yours for INR 20,990 (about $305). We don’t expect these same prices to be retained in all the markets the devices will be sold.

Pre-booking is live in India via Amazon India and includes an INR 1,000 cashback if done by July 31. Availability begins on August 7, 2018.