Strategizing one’s moves is an ever-evolving phenomenon in the world of Wordlers. Some have taken the vowel vow, some prefer shooting in the dark. However, you have to admit that, a better understanding of words and their letter composition does contribute to packing your guesses with more punch.

Wordle is a game of deduction that is entirely based on the player’s ability to look at words as a sum of their parts. When you make your guess, the system gives feedback to each of the individual parts –the letters that make the word. The word itself isn’t relevant in the guesses until you piece together the letters to discover the hidden word.

This process of guessing largely involves predictions based on calculations of the frequency of appearance of letters in a word (five-letter words to be more specific in the context of Wordle.) Is there a way to crack the Wordle letter frequency?

What are the Most Common Letters in English (US)?

There are over 170,000 words that are currently in use in the English language. From the single-letter article ‘a’ to the 45-letter jargon ‘Pneumonoultramicroscopicsilicovolcanoconiosis’, words are formed when letters come together in varying combinations to take a form that can be articulated and stands to denote something.

If you break down the letters in the words, it becomes evident that certain letters tend to appear more frequently than others. For instance, the ‘c’ in ‘focus’ or ‘binoculars’ or ‘e’ in ‘evident’ or ‘tender’. Letters can be called common if they make a frequent component or repeating if they appear more than once in a word.

I know this has been done before but here’s my take:
5 best wordle starting guesses to maximize your chance of getting at least one correct letter:

If ARISE gives you nothing the next best guesses:

Unsurprisingly, the vowels (a, e, I, o, u) are the most common letters in English words. But, there are quite a few consonants that can also be singled out for their frequency. That means, it would be very rare for you to come across words that do not carry at least one of the vowels and some of the common consonants like s, o, n, r, t, l, and h in your everyday vocabulary.

This isolation based on frequency is applicable mostly to all the words in English in general. However, to play Wordle, you might have to rely on a more specialized list of words that comprise solely of the eligible and acceptable words. The process of grouping common letters in Wordle could be called a mathematical deconstruction of the available list of words to study the frequency of appearance of letters, their positions in the words, and their tendency to repeat itself.

Related: How to Play Wordle

We have already analyzed the pertinence of placing vowels in your first and second guesses. A five-letter word would have at least one vowel sound. So, when you consider a Wordle word, say ‘bumpy’ phonetically, it has two parts — |ˈbʌmpɪ|– in other words, it has two vowel sounds but only one letter that is categorized as a vowel.

Consider another example: ‘combs’ |kəʊmz| — it has one vowel sound ‘əʊ’ and an actual letter classified as vowel — ‘o’.

When you talk about vowels in Wordle, what you actually factor in is not actually the vowels – a, e, i, o, u, but the vowel and diphthong sounds like ɪ ʊ uː e ə ɜː ɔː aɪ. It brings to attention that vowels need not necessarily be the focal point in a word but the sounds they make are what make them.

For instance, consider the word ‘dryly’ |ˈdraɪlɪ|– has two vowel sounds in it although it doesn’t include what you call a vowel.  You can recollect the highlights in the article linked below. So, we can surmise that frequency of letters and particularly of vowels is dependent on its ability to give rhythm to words.

Related: 5-letter Words With the Most Vowels

To apply the frequency strategy, you can assimilate a chart that maps out the appearance –frequency and position — of letters in five-letter words. 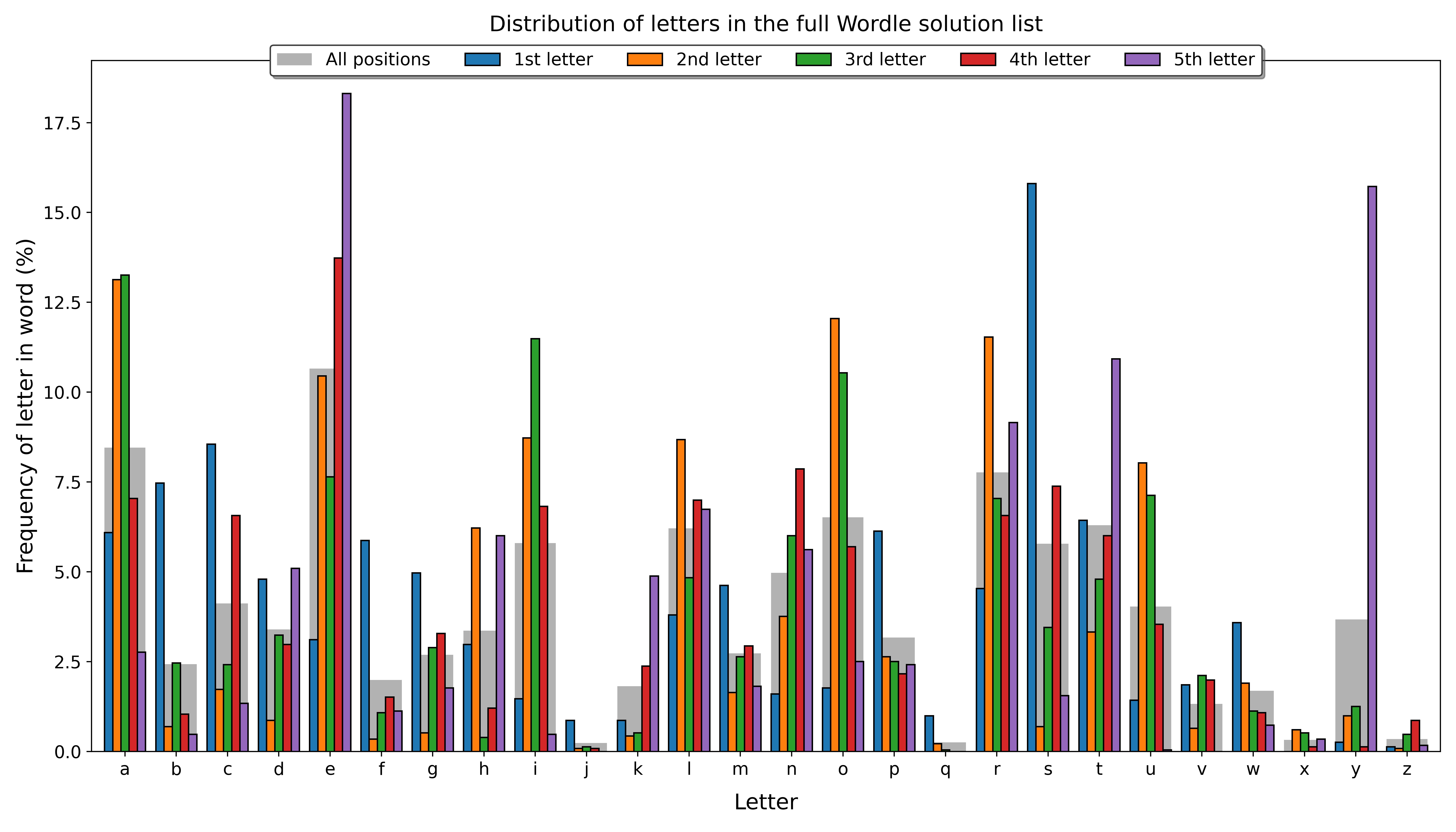 Followed by an almost neck-to-neck rate with over 15% are ” S” and “Y”. “S” is the leader when it comes to first letters in Wordle words and “Y” is the second most commonly appearing ‘fifth letter’ in Wordle words. Then comes “A” which makes the second or third letter in over 12.5% five-letter Wordle words.

Another methodology (which may not be infallible) is to study the letter distribution of Wordle answers of 2022 so far (this includes just the January Wordles that have been out). Based on the pattern of frequency R, E, A, S, B, G, N, O, T, U, in descending order, are commonly found in January 2022’s set of Wordles. Letters like I, Y, K, L, M, C, Q, etc have a lower appearance rate with letters like H, and Z not making it at all so far to Wordle 2022 words.

Related: How to Play Wordle More Than Once a Day

With a seemingly fickle list of letters in hand, is it even possible to come up with a surefire letter combination? It is not impossible, especially if your aim is not to nail the challenge in the first (maybe not even the second) guess.

If you believe in the School of Vowels are the Way to Go in Wordle, you can use words rich in vowels like SOARE, RAISE, ROATE, EQUAL. Since elimination is the objective here, use as many vowels as possible like in the word OUIJA, AUREI, OURIE, ADIEU — they have 4 common letters (vowels) in a single word. My personal favorite is LOUIE as it has four vowels as well as “L” which has a high probability of taking the second or fourth position in five-letter words.

(The Tweet below may be a SPOILER. You have been warned!)

Okay, so this is my Wordle strategy (this is *not* today’s Wordle). “Adieu” hits most of the vowels and “snort” hits most of the high frequency letters. Usually easy-ish to solve afterwards. pic.twitter.com/KVql2SlzJI

However, as a daily player, my strategy is to go straight for common consonants like S, R, N in my first word (eg: STERN, BARNS). Repeating a letter in the first two guesses is the worst bet you can make especially if you wish to wish to finish the challenge in fewer moves.

Related: How to play Unlimited Games in Wordle

A fairly balanced letter distribution is the most ideal–for example, the words ATONE, STARE, REACT are good starter words as they comprise an all-common letters ensemble. Starting with S might also be something to consider given the recurrence of the letter in the list of Wordle solution words. E, A, R, O, T, C in that order show higher appearance frequency in all positions. Y would make a good third guess depending on the game feedback of course!

The following is a list of common letters to form your guesses around (based on the solution words letter distribution chart).

If we try we can come up with plenty of first words from the grouping alone! Eg: TRAIL, SHINY, PALER, CHECK, etc.

Related: What are the rules in Wordle?

Check Out This Awesome Spreadsheet to Study Letter Frequency

One of the charms of Wordle is its wholesome community and the contribution of its members on enhancing the player experience. They seem to provide endless support in the form of programs, archives, and practical tricks and strategies to improve our Wordleing. Among the league of Wordler heroes are Spreadsheet geniuses who have managed to unravel the mathematics of letters and their distribution in the list of Wordle Eligible words.

To understand the algorithm from a layman’s point of view, we can consider a hypothetical scenario:

There is a total of 100 words in the Wordle depository. When we introduce the letter “E” (which has the most appearance frequency in all positions), the algorithm will count the appearance of the letter in each position amongst all the 100 words. All the alphabets are churned through the formula in a similar fashion to compute their rate of appearance/ respective frequency in the context of the given set of words. The end result will be a score with the percentage of appearance and the position they commonly occupy in the given set of words.

Of course, the actual process involves a lot of computation, which might honestly go right over our heads if we try to decipher. So, let’s leave it to the Smart Alecs to figure it all out for us. But, in case you want to know more, check out the Reddit user, MangoSquash‘s Spreadsheet Wordle Solver.

Related: How to Increase Difficulty in Wordle

Even with a fairly good understanding of common letters, it might not necessarily be easy while actually playing to execute the strategies. That is where you might need the help of Wordle helper tools. They don’t prompt you to teach but enrich your choice or available guesses with words that allow you to deploy the useable letters appropriately. You can learn more about Wordle Helper tools by clicking on the linked article below.

So…what we have learned today is that some letters are a bit more favored than others in five-letter words. However, in a game like Wordle with enough variety involved in it as a whole, using certain letters in the first two guesses is only more likely to lead you straight to the answer. There are still words like ZESTY or VYING that could throw you off the loop! At the end of the day, Wordle is something that takes just a bit of luck and gives a bucket load of fun.

it's that time again.. everyone is posting their wordle 221 x results!

How to restart computer with keyboard only [2023]

How to permanently disable Sticky Keys on Windows 11 [2023]