Over the centuries, humans have gone from sparking the mechanical age into life to evolving through time and space with the electronic revolution. One of the more personal achievements of mankind in the past decade has been creating smartphones for the general populous, which today keeps us connected across the entire world effortlessly. However, one problem that mobile devices have battled with over the years is battery life, and there’s been limited advancement in that sector over the years.

Experiencing poor battery life is probably one of the most common issues users face on mobile devices, and while there are plenty of software features in the Android OS such as Doze Mode to prevent it, sometimes you need a little extra. While there are a bunch of tired and tested battery monitoring apps that work like magic, they require root access which the mainstream Android user may not have. This is why we’ve compiled a list of battery monitoring and calibrating apps that do not require root access and still get the job done.

What is battery calibration

The phone’s battery is accompanied by a smart chip that sends signals which indicate the battery levels. Our smartphones use these signals to display battery levels on our screen. During the course of usage, the phone’s battery drains and is recharged many times due to which the chip and battery’s chemical capacity doesn’t remain calibrated which leading to an inaccurate display of readings.

Battery calibration is basically the process that allows you to come up with an exact reading of your device’s battery life. This exact reading can be vitally useful in estimating the battery performance and begin showing the accurate battery levels again.

Why you may need a battery calibration app

I have a moto z and i thought the battery became bad as when the phone reaches 40% it shuts down randomly, if i boot it, it says the battery is empty, but when i put charger on, the battery comes back to 40%, i seriously considered buying a new battery but thank god i found this app which solved the problem, now for almost 3 monthes i can go as low as 3% and the phone doesnt shut down for itself, the first calibration didn’t work, but the second one did it for me

So yes turning to a battery calibrating app is definitely a good idea, especially if you have an aging battery.

It simply cools down the battery and CPU of your device while fixing the underlying cause. Although most OEMs offer devices that come power-packed with powerful batteries that serve a good battery life. But battery cooler apps can still prove to be helpful for those who make use of custom ROMs. Like this particular app user:

Amazing and simple battery calibrator that works extremely well. Its particularly useful if you have just had a new battery installed or are running custom roms. Thanks devs!

So overall, the battery cooler apps can really work for your smartphone in a majority of cases.

How to remove unwanted notifications from battery app

There is no denying the fact that battery apps can prove to be a vital tool for keeping your phone healthy and completely preventing overheating issues. But the unwanted notifications that come along with it can be a pain in your neck especially if those are notification ads. In that case, disabling the notification option can be a good idea. Here are two ways to do so:

As a device ages, battery calibration becomes important as it can get you an accurate display of battery levels and achieve longer battery life. The advanced battery calibrator does just that and allows your device to be charged to its full capacity while fixing other underlying battery issues.

Out of all the apps that we tested, GSam Battery Monitor certainly stands out for the fact that it gives you features that you’d expect from a root-enabled battery monitoring app, but without the need to root your device. You can simply plug in your Android device, grant permission called “BATTERY_STATS” through ADB and get access to deeper battery statistics and features in an instant. 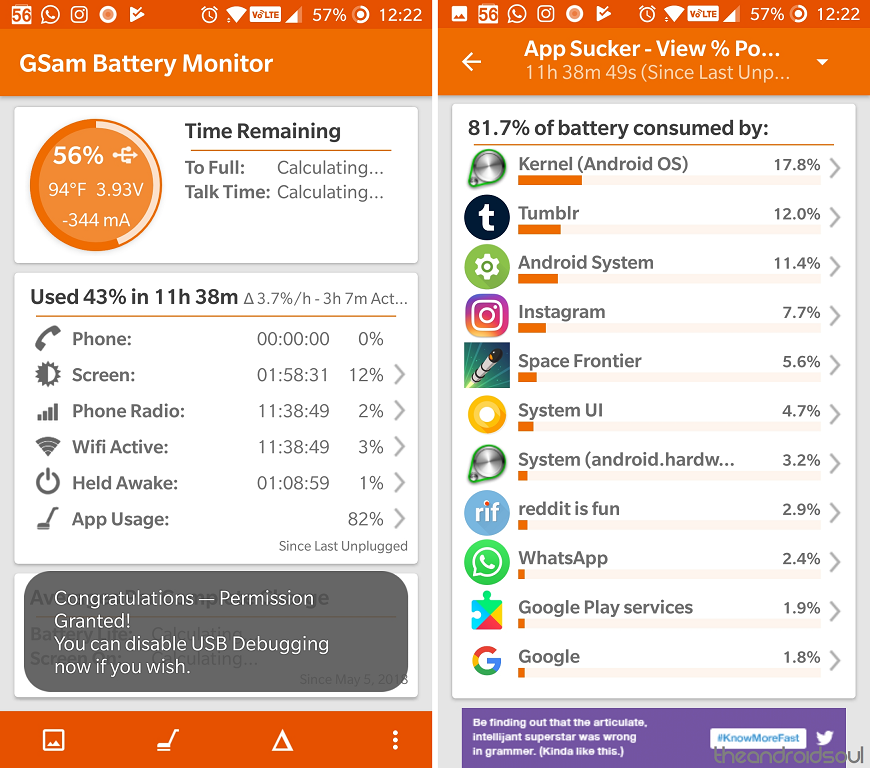 Once you have this enabled, GSam Battery Monitor gives you unrestricted access to App Sucker (finding out what app is draining the battery and how), different battery consumption Charts for Temperature, Phone Signal, CPU, the ability to view Kernel Wakelocks (what is causing your system processes to wake up) and so much more along with it.

To prevent quick power drainage Battery Doctor can be vitally useful. This app can prove to be a solution to extend your phone’s battery life and optimizing it to its best potential. You can make use of the super saver feature to know your battery status, health along with the battery temperature, capacity, and voltage to keep you updated.

The high frequency of ads can get annoying at times but the app is a fairly good option to get rid of heating issues and giving a new life to your aging battery.

Possibly the most popular battery monitoring/power saving app that you’ll ever come across, Greenify has made quite a name for itself among experienced Android users. Unlike the first name on the list, Greenify is not just a way to monitor the battery life, but acts as an active participant in helping you conserve power. 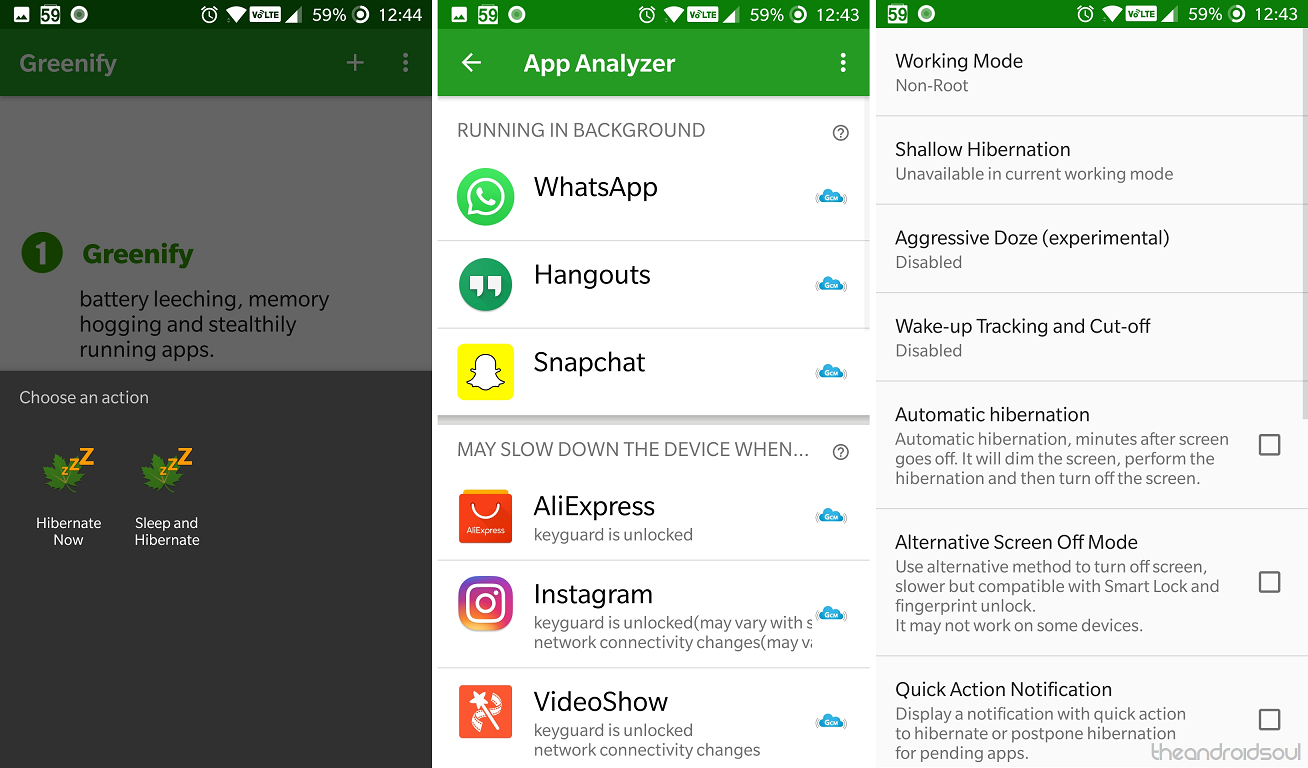 Instead of rooting your Android device, you can grant multiple ADB permissions to the Greenify app for enabling the Wake-up Tracker, enabling the Aggressive Doze Mode to cut down on background processes, enable Automatic hibernation, or even create shortcuts for these actions so you can easily activate the power-saving Doze Mode manually. Additionally, you can even “Greenify” the System apps for those times when apps and services from Google itself are draining out all the juice.

Related: How to fix the battery drain problem on Oreo update on Samsung Galaxy S8 and Note 8

Most mobile users will begin to face charging issues and poor battery performance problems over the course of a couple of years. This is when the AccuBattery app comes in handy in helping you realize that the physical life of your device’s battery depends on how many charge cycles it completes. 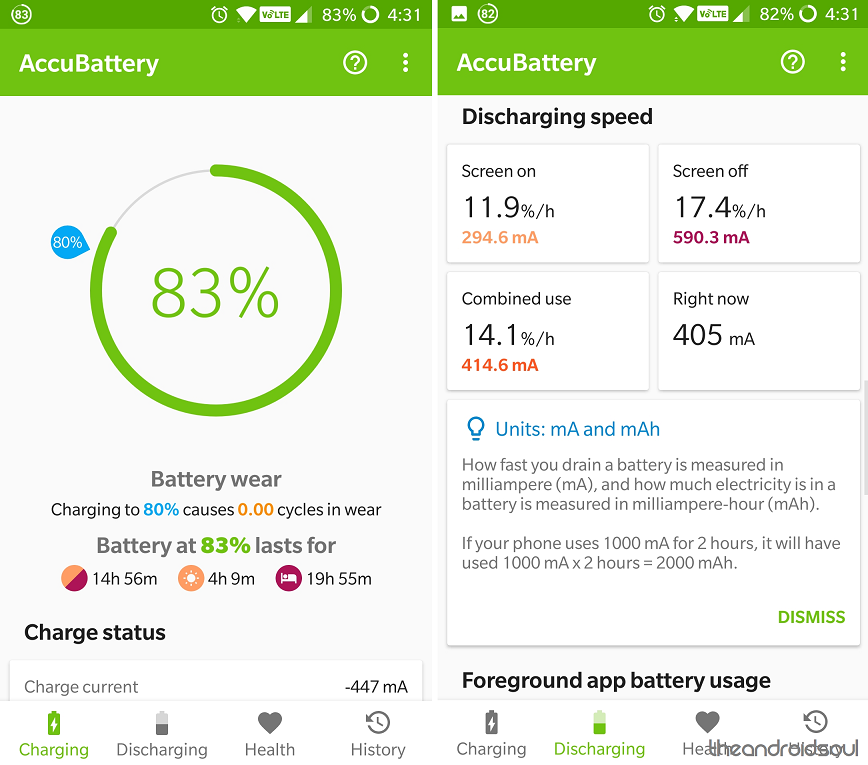 The app is designed to alert you every time you charge up your device up to 80% and deplete the battery all the way down to 0% (which is the optimal percentage to reduce the cycles in wear). From helping you see important metrics such as Voltage, Temperature, and Charge current, to viewing the long-term statistics such as Battery capacity, Battery wear, and Battery health, you get to take full control of your phone’s battery life.

While we do wish for a world where one Android device would last you a lifetime, the fact that the battery of your phone is a hardware element makes it vulnerable to the test of time. Whether you’re wondering if the lithium-ion battery of your mobile device has run its course or simply want to see if your charger adapter and cable are under-charging or over-charging your device, Ampere app is the one you need. 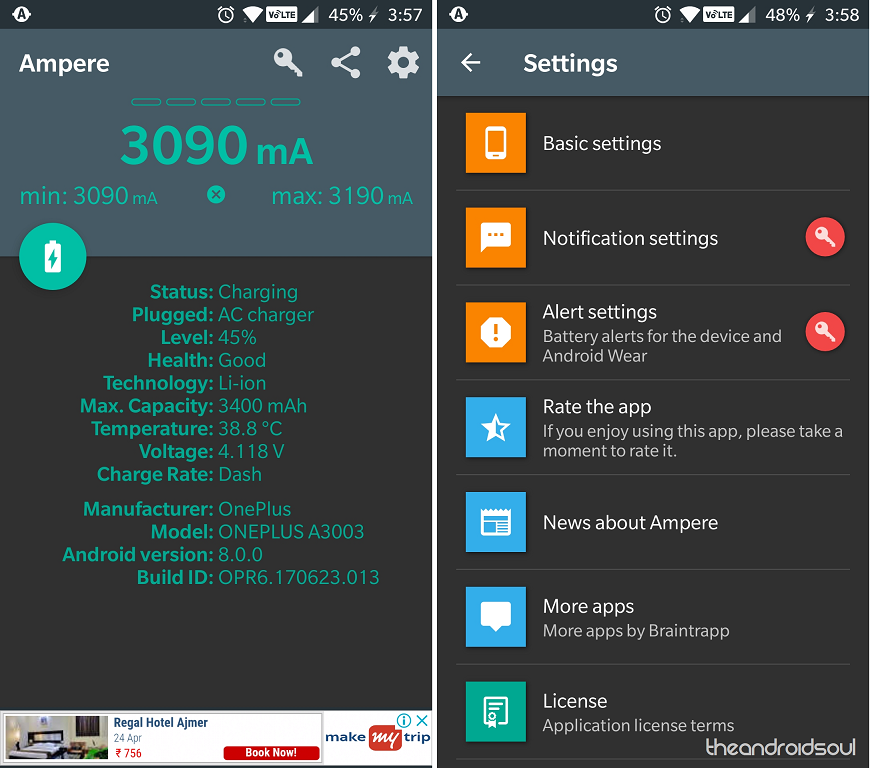 Acting is just a standalone battery monitor app that helps you find metrics such as Health, Temperature, Voltage, and Charge Rate. Most importantly, the Ampere app helps you recognize when a device is being under-charged (denoted mAh in Orange) and even over-charged (denoted in Red), helping you not only get optimal charging time on your device, but also maintain a stable environment for the battery.

Related: How to keep track of battery drain information on Android

Which of these battery monitoring apps is working the best for you? We’d really like to know, so reach out in the comments section down below.

How to set an audio file as a WhatsApp Status message

How to fix delayed notifications problem on Android