Sony was the first non-Google OEM to unveil Android 8.0 powered smartphones back in 2017 – the Xperia XZ1 and Xperia XZ1 Compact. Sony is also one of the few OEMs who came up with Android 8.0 supported list, which is also given below.

Sony’s take on software is easy and nice. They do overlay the Android OS with their own Xperia UI, but it isn’t done in your face like Samsung’s TouchWiz does — itself not converted into Samsung Experience, which is much sober now. Use of stock-similar custom skin would make it easy for Sony to come up with Oreo update sooner than later. For comparison’s sake, check out the Samsung Oreo rollout schedule here.

Let’s see Sony’s 8.0 update plans and roadmap in details below.

Sony announced its Oreo release roadmap last month, and they include all those devices that we were hoping they would, except for the Xperia XA and XA Ultra. The company has impressed us well with their Oreo update rollout. They have already given their three handsets Android 8.0 OTA — the Xperia XZ, XZs, X Performance and XZ Premium — while they have also launched XZ1 and XZ1 Compact with 8.0 pre-installed, making it six Sony devices running Oreo at the moment (December 2017).

Let’s see what the situation is for each of the popular handsets they released in last few years.

Here is a list of Sony devices with their Oreo eligibility status and expected release date.

That Sony left Xperia XA series out of Oreo window is a blow. What do you think? 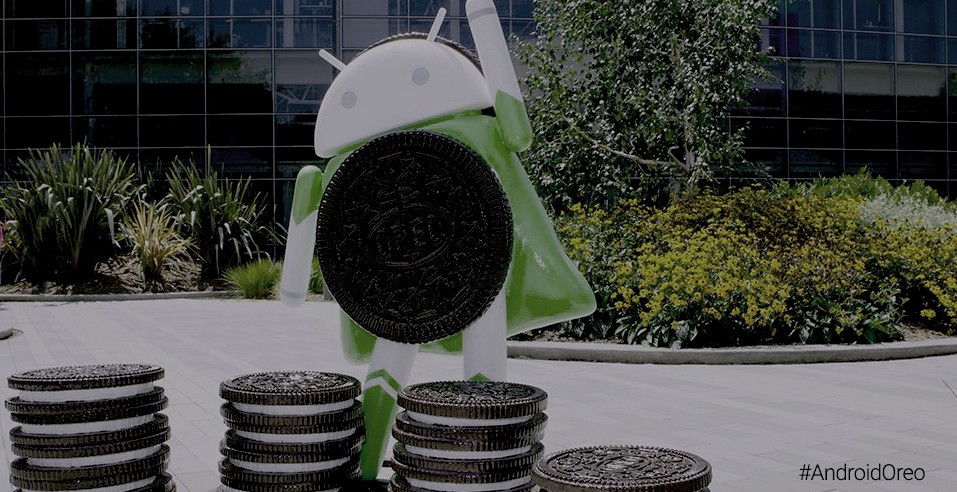 Update [October 24, 2017]: Well done, Sony! We are surprised for good here. We expected Sony to bring the XZ Premium Oreo update sometime in November, and while usually, OEMs miss the expected rollout dates, Sony just outdid itself by releasing the stable Android 8.0 update for XZ Premium in October itself. Starting today, the XZ Premium sets around the world should be receiving the system update notification for the Android 8.0.

The Android Oreo update for the Sony XZ Premium is now available, beginning on 24th October 2017. In case you haven’t received the Oreo update notification yet, you better check for it in Settings > Updates > System update.

Besides the new features that are part of Google’s Android 8.0 build, Sony is also pushing exciting features of its own too, chief of which is 3D creator, something that was exclusive to XZ1 and XZ1 Compact till now. You also get autofocus burst, predictive capture, improved sound quality and app shortcuts.

Sony has released the Android 8.0 update for the Xperia XZ and XZs handsets as software version 41.3.A.0.401 starting today. As the rollout is gradual, it may take the Oreo OTA update notification to knock your device a few weeks, so patience is key. The update also brings November security patch with it, and besides the usual Oreo features (Notification dots, Picture in Picture, Auto-fill, smarter text selection menu, new style of app folder, new design of Quick Setting tiles, etc.) the 8.0 update also brings Xperia Actions and Reminders to the phones. 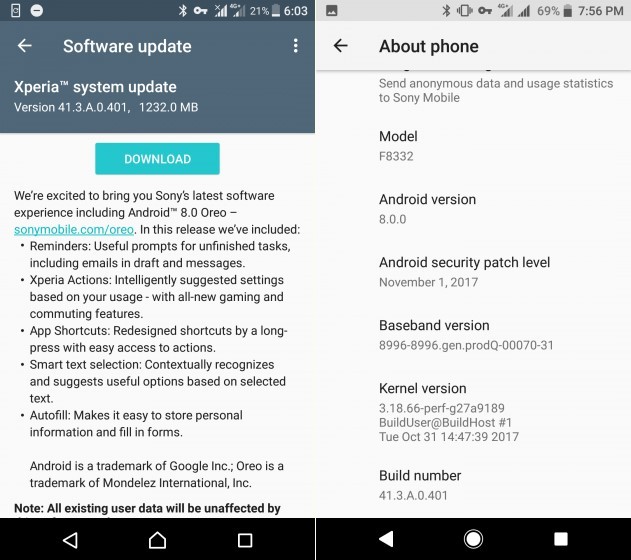 Sony released the Android 8.0 update for its X Performance users as version 41.3.A.0.401, which is the same build that got XZ and XZs users their Oreo treat. The Oreo update for the X Performance is also available as an OTA, which we shall get you pretty soon. Besides Oreo features, the Android 8.0 OTA also brings Sony’s own feature, Xperia Actions.

Sony released Android 8.0 to the two-year-old Xperia X and Xperia X Compact in early February, joining the Xperia X performance in getting the OS. It wasn’t a surprise as Sony had already confirmed in its roadmap that the two Xperia X handsets will be upgraded to Android Oreo.

Sony Xperia R1 and R1 Plus

The little-known Sony Xperia R1 and R1 Plus are now receiving Android 8.0 Oreo. These were sold exclusively to the Indian market, which is why you might have never heard of them. Nonetheless, they are budget phones that were released in November 2017 preinstalled with Android 7.1.1 Nougat. Three months later, Sony has updated them to Android 8.0 Oreo. Cool huh!

Sony unveiled the Xperia L2 in January 2018 and unlike the Xperia XA2 family that accompanied it, the L2 came preinstalled with Android 7.1.1 Nougat. This was a surprise for many, even if the L2 is the lowest specced device from the company so far.

Whether Sony will upgrade the device to Oreo remains to be seen, but we hope it happens at some point this year.

By not including the XA and XA Ultra in their list of Android 8.0 devices, Sony has confirmed that they do not plan to release the Oreo update for these two handsets. That is disappointing because these two are pretty capable devices, and could easily run Oreo, but mostly because Oreo was released by Google well within one and half-year Sony launched these two handsets.

As most OEMs to, Sony doesn’t think they are obliged to roll out Android 8.0 for a mid-range device which has already been given one major Android OS update in Nougat, having launched the devices on Marshmallow.

Well, you couldn’t really blame Sony for this, as most OEMs follow this practice of one-major-update for mid-range devices — have a look at HTC Oreo and Huawei Oreo roadmap to get more idea of this.

In fact, we have Xiaomi too, which would give even its flagship devices only one Android OS update. No kidding! In fact, LG did something similar with the G4 7.0 update, but we don’t expect anything like that in LG’s Oreo rollout.

But you can hope for a LineageOS 15 or the like AOSP ROM to launch for your XA or XA Ultra, which would get you a good taste of Oreo features, as this ROM is based on Android 8.0.

Though, the good news is, given the strong developer community Android OS enjoys, you can safely bet on Android 8.0 AOSP ROM to released for these devices, as well other Sony devices whether they are getting official Oreo update or not.

You can watch out for the most popular AOSP ROM, the LineageOS 15, for this. Check out our LineageOS 15 release coverage here to get the latest info on this.

These are some devices for which our users have asked us a few times about their Oreo update. Well, if it wasn’t obvious in Sony’s announcement already, suffice it to say that the only way these devices get Android Oreo is via a custom ROM, like LineageOS 15.0. That’s it.

Sony has not included any of these in its Oreo supported list of devices. So, whether you own an Xperia L, Xperia M, Xperia M4 Aqua, Xiaomi E3, Xperia E4, Xperia E5, Xperia C3, Xperia C4, Xperia C5, Xperia C5 Ultra, or any of device that is not Xperia X series, you cannot hope for an Oreo update from Sony.

Sony devices not eligible for Oreo

Here’s a list of Sony devices that won’t get Oreo 8.0 OTA.

Do let us know what you think about Sony’s Oreo release plans? Is your Sony device covered under its Android 8.0 supported devices list.