Samsung Galaxy A40 appears on Geekbench with Android 9 Pie

Last year, Samsung added new members to the Galaxy A series – the Galaxy A6 and A6+. The A series had already produced the Galaxy A3, Galaxy A5, Galaxy A7, Galaxy A8, and Galaxy A9 models and from the latest developments, it appears there is another member(s) in the works, tentatively known as the Galaxy A40.

A listing on Geekbench shows a Samsung device with model number SM-A405FN and looking at how Samsung assigns model numbers to its devices, this could easily end up as the Galaxy A4+. This should mean there is a standard Galaxy A4 to accompany the Plus variant, but for now, the only details we have are for one model.

Apparently, the A40 will ship with a Samsung-made Exynos 7885 processor allied to 4GB of RAM and for the software, you get Android 9 Pie preinstalled. The fact that the A40 will run Pie out of the box tells us that the phone will be unveiled after the Galaxy S10, the first from Samsung to come preinstalled with Pie. 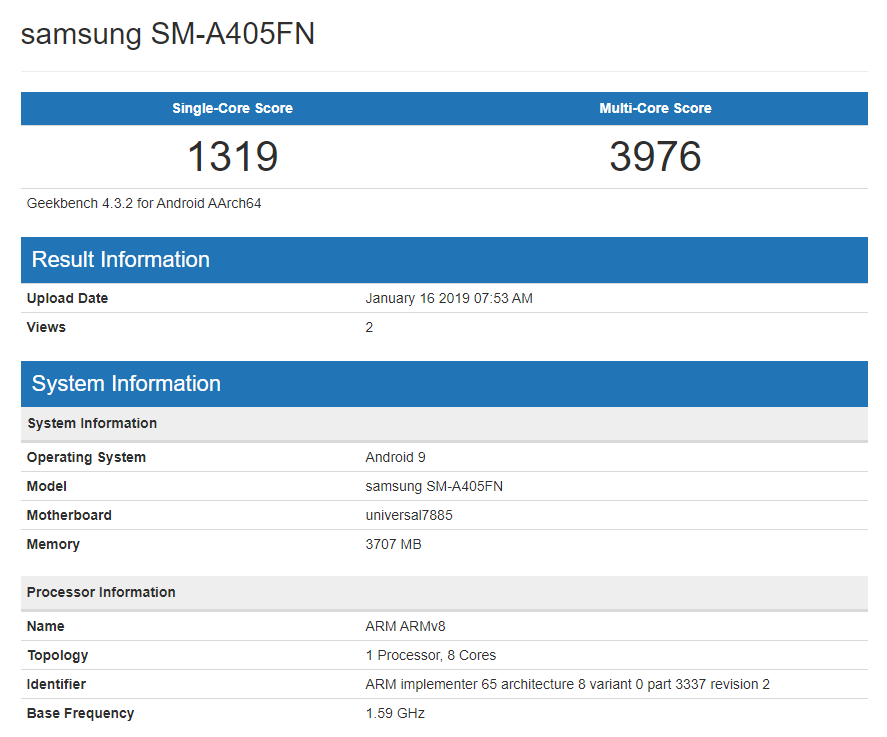 As for the rest of the specs, our guess is as good as yours. The story isn’t so different when it comes to the Galaxy A40, but if history is to be consulted, the device should share most of the specs and features with the Plus variant.

The Galaxy A40 should help grow Samsung’s portfolio in the midrange segment alongside the upcoming Galaxy M10, Galaxy M20, and Galaxy M30 handsets, whose launch date in India is set for January 28th.

Samsung Galaxy S10 Plus shows up on Geekbench

Samsung Galaxy S10e: All you need to know