February 15, 2019: Samsung hasn’t announced a release roadmap for the Galaxy M20, but the latest developments do suggest the phone will be unveiled in more markets outside India in the coming weeks and months. SamMobile already has M20 firmware for multiple markets in Europe, Asia, and Africa, implying that it won’t be long before the M20 goes official in the said markets.

Some of the markets in question include Italy, Germany, Turkey, Ukraine, Russia, Spain, Portugal, Kenya, Nigeria, Egypt, Morocco, Saudi Arabia, Iraq, and so on.

After months of rumors, Samsung Galaxy M20 is finally among us. The phone was unveiled in India, debuting alongside the slightly inferior Galaxy M10 as the first of devices we will be seeing in the new lineup of Samsung Galaxy M series.

The Galaxy M20 and its counterpart become the first Samsung phones with a notched display, but unlike Apple, you get a waterdrop-style notch the company calls Infinity V. Given that the M20 is a target for millennials, a market segment that is known to be fond of catchy features, great cameras, big batteries, and big display screens as well, it looks like Samsung has something good going on here, especially when pricing also comes in.

But first, the specs.

With the waterdrop notch taking up the minimal space possible, Samsung managed to squeeze the 6.3-inch LCD panel in a frame that is smaller than the Galaxy M10, which has a smaller 6.2-inch panel. Under the hood, the M20 packs an under-clocked Exynos 7885 that Samsung has baptized Exynos 7905 allied to either 3GB RAM and 32GB storage or 4GB RAM and 64GB storage.

Regardless of the storage variant you pick, there will be room to expand via a microSD card slot. This should give you enough room to store the many photos you will be taking with the dual-lens 13MP + 5MP lens on the back and 8MP selfie shooter. BTW, the secondary 5MP lens on the back is an ultra-wide lens that can capture a wide-angle view of up to 120 degrees, which should be pretty useful.

The highlight of the Galaxy M20 is the massive 5000mAh battery on board. It can be fast-charged via a USB-C port, two features that you’ll struggle to find in this market segment. In terms of software, there is Android 8.1 Oreo pre-installed, but an update to Android Pie is scheduled to arrive in August 2019.

Pricing and availability, including the U.S.

Whether the Galaxy M20 will be released in the U.S. is still a matter of debate. We saw the device pass through the FCC before launch, but this doesn’t guarantee us anything on matters of availability in the U.S. Still, the rumor that the M series is here to replace the J series could play in favor of a U.S. launch for the M20. We will update this post just in case Samsung makes an official statement.

Why should you buy it?

The Galaxy M20 has just been unveiled in India and begins selling on February 5th through Amazon India and Samsung’s online store. Given the many phones that are already selling in the sub-INR 15,000 category, the question one would be asking is why buy the Galaxy M20? Let’s find you some answers.

This is hands-down the best feature of the Galaxy M20. The biggest we’ve seen in a Samsung Galaxy phone since the 2016 Galaxy A9 Pro, the 5000mAh unit promises more than a day of use on a single charge no matter how heavy it gets. 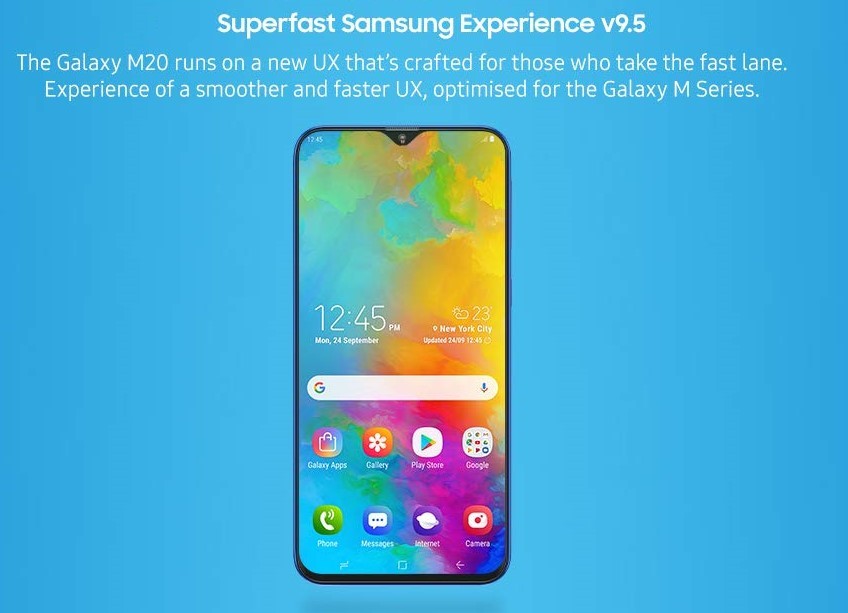 If you somehow manage to get the massive 5000mAh battery to 0% before the end of the day, getting back up won’t be long thanks to the supported fast charging technology via a USB Type-C, features that are mainly associated with midrange and high-end phones.

For a 5000mAh battery, there is no doubt fast charging was needed, still, the inclusion of this tech alongside the future-proof USB-C port makes the Galaxy M20 stand out from the heavily crowded budget market.

Let’s face it, the notch is one fugly thing that ever graced the smartphone market, but since its debut, we’ve seen several iterations that have resulted in things like what we see on the Galaxy M20. Samsung calls it Infinity V, but on the streets, you’ll come across words like waterdrop or teardrop design, whichever suits you.

The Infinity V design not only looks great on the M20, but it’s also the reason the phone has a 6.3-inch display screen housed in a frame measuring 156.6mm tall. To give you some perspective, the Galaxy A7 2018 is 3.2mm taller yet it has a smaller 6-inch screen, all thanks to the bezels that have now been eliminated by the Infinity V design on the M20. 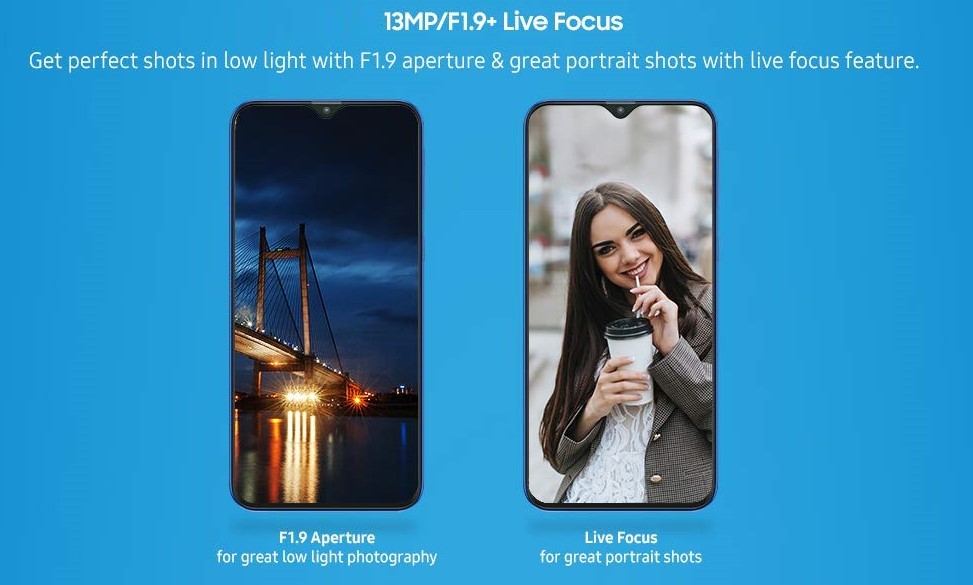 The Galaxy M20, like many other budget phones you’ll be seeing this 2019, has a dual-lens camera on the back. The setup has a 13MP main lens with an aperture of f/1.9, promising great performance in poorly-lit conditions, but it is the secondary 5MP lens that will be making the waves.

Rather than go with a depth-sensing lens for bokeh effects, Samsung went for an ultra-wide lens with a field of view of up to 120 degrees. This makes the M20 the only device in this market segment with a wide-angle lens and once again, the device stands out.

If you are a fan of bokeh effects, this has been taken care of as well. Both the rear and front cameras support Live Focus camera mode that should reproduce depth-sensing effects using software.

A premium midrange processor in a budget phone

The Exynos 7885 has the same octa-core configuration, but the 2 Cortex-A73 cores are clocked at 2.2GHz and not 1.8GHz like the case of the M20. As for the rest, nothing changes, including the Mali-G71 GPU.

Essentially, what this means is that you are getting premium midrange performance in a budget phone, which is yet another thing that makes the Galaxy M20 a special budget phone.