Xiaomi is rolling out MIUI 10 updates that bump the security patch level of the budget Redmi 5 and the superior Redmi 5 Plus (Redmi Note 5 in India) to the latest in town, November 2018.

Quite a rarity from Xiaomi, but don’t get too excited if using the standard Redmi 5 because this update is limited to beta users. As for the Plus variant, the update is part of the incoming stable MIUI 10.0.4, which also has plenty of other additions.

Following the announcement of MIUI 10 beta 8.11.15 earlier today, we expected the same update to be pushed to the Redmi 5, but given the device is also testing Android 8.1 Oreo, it’s possible that Xiaomi chose to give it a separate update that also takes care of other bugs, hence the latest Android security patch. 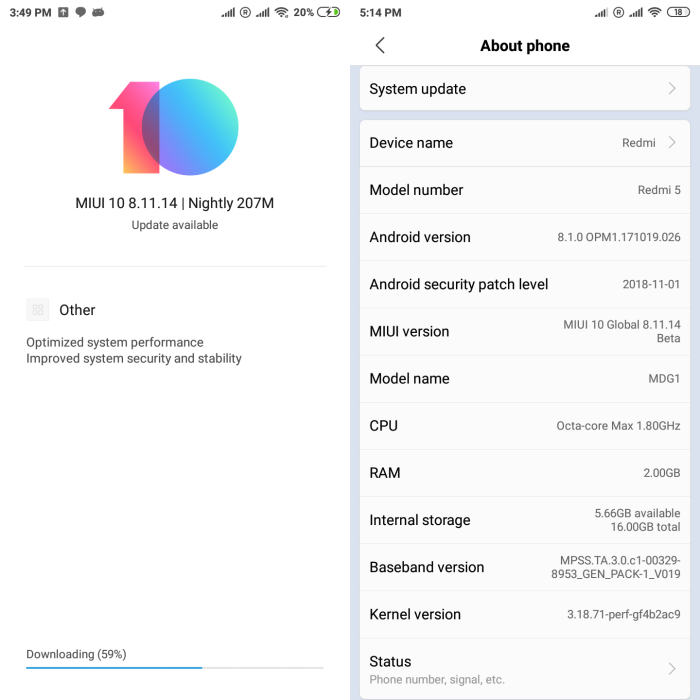 Besides the new security patch, the MIUI 10 beta 8.11.14 update for Redmi 5 also improves system stability and performs several stability optimizations to ensure that despite being beta software, it can still work just fine as a daily driver.

This is an OTA update that is rolling out to those currently using MIUI 10 beta 8.11.8 from last week, the version that brought Oreo 8.1 to the Redmi 5 alongside August 2018 security patch. That said, it may take a few days before all units get the download notification, so be patient.

As for the Redmi 5 Plus, the MIUI 10 update is a stable rollout targeting those currently using the stable version of MIUI global ROM.