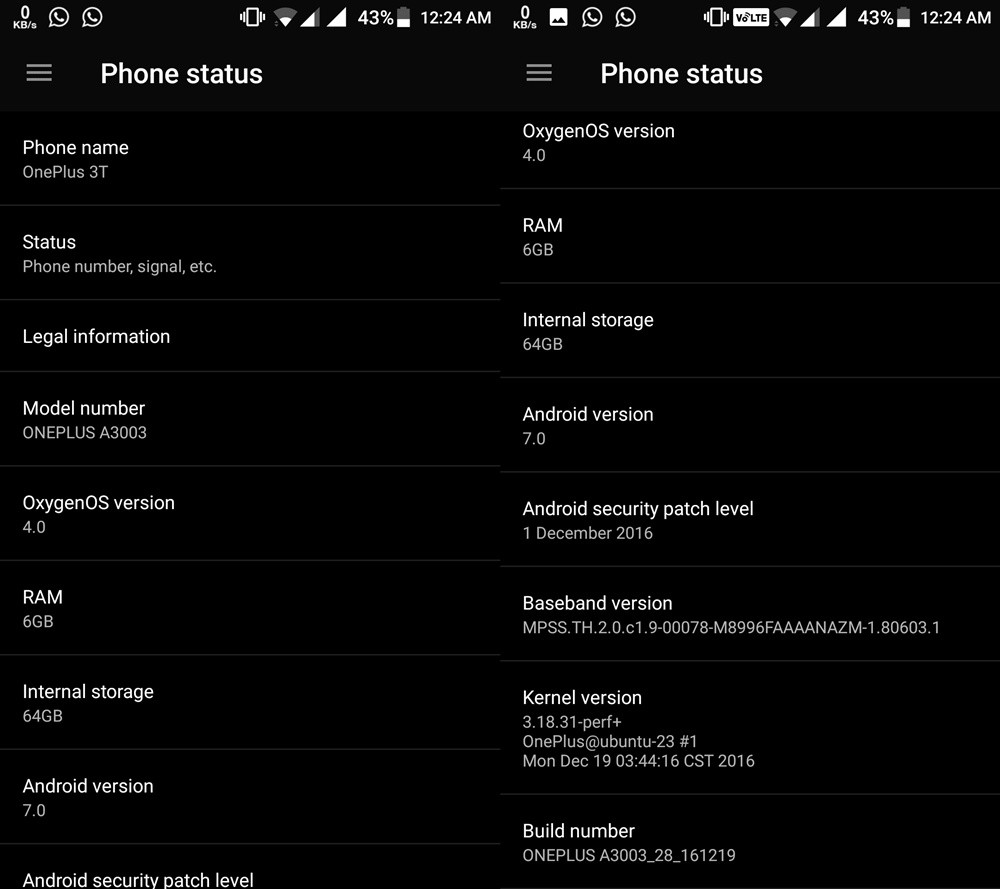 Update [November 14, 2016]: The new image leaked on the web today, with a wor don specs too, where three changes look to be part of OnePlus 3T compared to OnePlus 3. FIrst up, you have Snapdragon 821 processor, then 3300mAh battery, and lastly, IMX398 sensor in back camera. 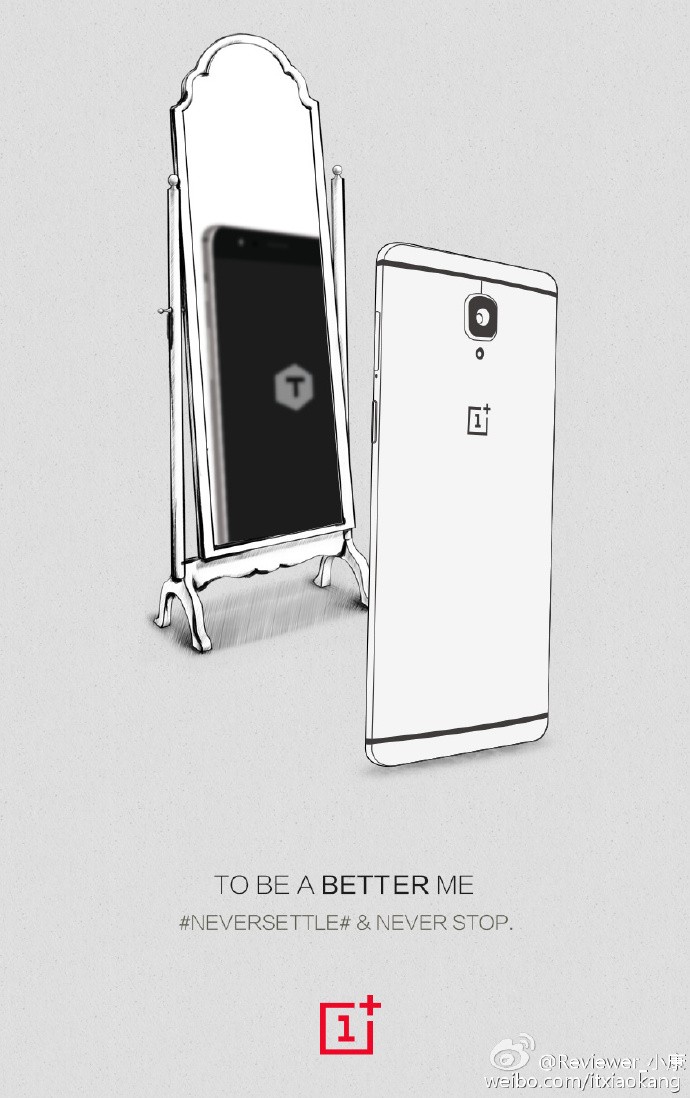 Update [November 09, 2016]: OnePlus just returned the favor to Qualcomm on Twitter, sighting the latter’s Snapdragon 821 processor — while laying adequte emphasis 2.35GHz clock speed, against Google Pixel’s 2.15GHz — as part of their next launch. We have more leaks and rumors than needed to safely assume that this new launch will be none other than OnePlus 3T, which is now confirmed to release on November 15, as mentioned in the tweet today from OnePlus. 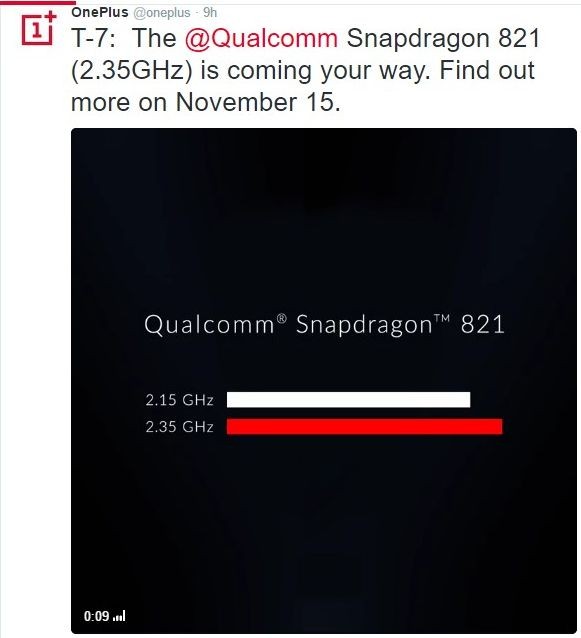 Update [November 08, 2016]: Qualcom used their Twitter account to reveal, or let’s say confirm, something that even OnePlus hadn’t. And while the later did that purposefully, the former did it completely inadvertently in announcing that there is a new OnePlus device coming to town, with the Qualcomm’s latest creation, the Snapdragon 821 processor, that alsp powers the Google Pixel sets. So, there you have the confirmtaion of upcoming OnePlus phone, and that has to be OnePlus 3T. We’ve seen trmendous amount of leaks for the OP3T, right? 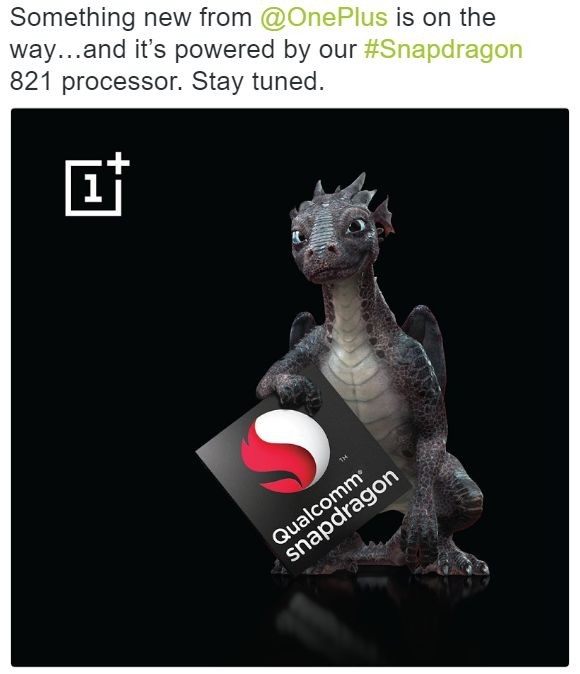 Update [November 03, 2016]: OnePlus 3T release date and specs are now almost confirmed, with only official announcement pending. Trusted Weibo leakster has come up with the launch date, and also some of the core items on the spec-sheet, both mentioned in the relevant sections below.

There would be a new black color for the OnePlus 3T, while battery would see an improvement to 3300 mAh. Processor see the upgrade too with SD821 chipset, and while RAM is fixed at 6GB, storage options include 64GB and 128GB. November 14, 2016 is when OnePlus could announce the deivce, with the event scheduled to take place in London.

Update [November 01, 2016]: With last rumors fixing the OnePlus 3T name for the upcoming OnePlus beast, the rumor mill has found some time now to reveal the OnePlus 3T release date now. And guess what, it ain’t coming in November, this month that is, as the rumor points to December 2016 launch.

Well, given the altogether new device in the making with new-ish spec-sheet, we aren’t surprised by December launch, and after all, the rumor also has the OnePlus 4 released date, pegged for August 2017 release. So, the OP4 release looks kind of pushed off by two months as the OnePlus 3 released back in June, but it’s understandable as OP3T should have some of its own exclusive flagship time too, until replaced by OnePlus 4.

Update [October 22, 2016]: Today’s look at all rumors OnePlus points to a rather new name for the upcoming OnePlus 3 variant, which hitherto we’ve known as OnePlus 3S or OnePlus 3 Plus. And that name is, admittedly, a bit more powerful sounding one: the OnePlus 3 Turbo, or OnePlus 3T. Like it? Well, we know you do. As we certainly do. We have likened it ever since we heard of the Moto Turbo devices. So, yes, we expect it to be a Snapdragon 821 beast, with extraaaaa battery. 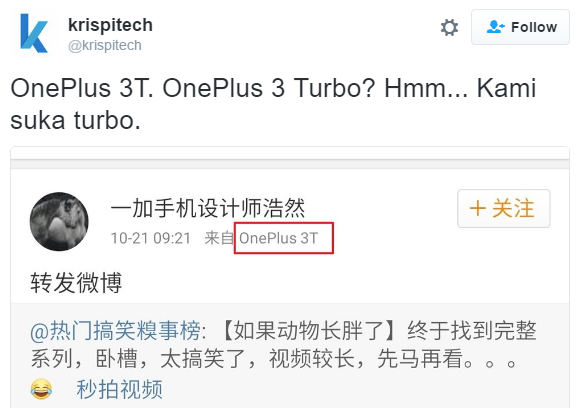 Update [October 13, 2016]: Well, it looks like AMOLED display is going to stay for the new OnePlus 3S (or 3 Plus). And this is good news. The Co-founder of OnePlus, Carl Pei, tweeted today to quash all rumors regards the substitution of AMOLED display with IPS panel on OnePlus 3, saying that he sees the company stay with optic AMOLED for the foreseeable future. Optic AMOLED isn’t a new type of display, but a regular AMOLED display customized by the OnePlus team, on a continuous basis. 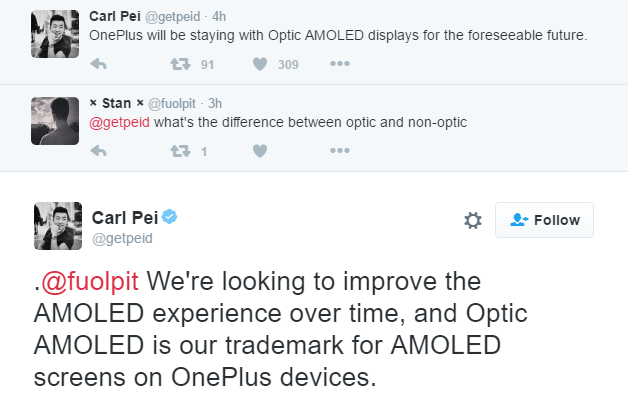 Moreover, today we got another proof of OnePlus 3S (or 3Plus) being in existence, coming over from a leaked listing pertaining to China’s certification agency called CCC. So, yes, if you had any doubt over the existence of OnePlus 3S (or S Plus), put them aside now.

Original article: In recent past, rumors of a new OnePlus device has surfaced. A lot. It’s rumored that this new guy will be something of a new OnePlus 3, or advanced OnePlus 3, as the name suggested so far include OnePlus 3S and OnePlus 3 Plus. We even have a new model no. to boot: OnePlus A3010 — FYI, current OnePlus 3 is A3000 in America, while A3003 in Europe.

Now, it’s been long rumored that OnePlus was considering a hardware change for the OnePlus 3, mostly because of the issues with availability of Super AMOLED display. But is this issue the real cause, or OnePlus is also looking to up the hardware now that Snapdragon 821 — this buddy powers Pixel and Pixel XL — is also on the market.

Rumors has it that OnePlus could announce the device on November 14, at the event to be help in London. We fully believe this rumor as it comes from a trusted source.

However, it could start shipping in December 2016.

Well, for the most part, it’s still OnePlus, but 3T stands for something, and that’s extra firepower in processor and larger battery, mostly.

Rest of the spec-sheet should be same as that of the OnePlus 3. Sorry, there looks to be no improvement on camera, while the price could see a hike of $80, as mentioned earlier.

Update [October 26, 2016]: We got some idea now! The master of Android leaks, the evleaks, thinks that you can add around $80 over what OnePlus 3 costs you, to have an idea of OnePlus 3T price. And what evleaks think generally comes out true, you know.

Not bad, given the fact that it will sport an upgraded Snapdragon 821 processor, and may feature a more powerful battery too. But will it sport a dual-curved display like Note 7, something which other OEMs have come out with since recall of Note 7 — Xiaomi outed Mi Note 2 while Huawei brings Mate 9 Pro to the table, both of which feature sides that curved.

Well, there is new color added to the gamut: Black. So, you could have choice of three colors: Gray, Gold and Black.

It seems that OnePlus has limited no. of AMOLED display in its inventory, which is looking already very slim. And OnePlus seems to be facing problem acquiring new AMOLED panels, whether that be down to extra price charged for it (would be issue with OnePlus 3’s tight margins), or simply because units are not available because of limited production.

Whatever be the reason, OnePlus can’t continue making OnePlus 3 with Super AMOLED panels, as the wait time is already pretty high in some markets for the OnePlus 3.

And BTW, the new device could come along with the OnePlus 3 Nougat update, which we know is in production right now, and was even teased on a very short video.

It’s been confirmed that OnePlus will stick with the AMOLED display, and would manage it. They have already invested a lot in AMOLED display tech, and call the result Optic AMOLED. Nice!

So, no IPS or Super LCD display for OnePlus 3T.

OnePlus is also considering giving the OnePlus 3’s processor an upgrade too — to Snapdragon 821.

If cost benefits accrue from IPS panel use in place of sAMOLED, then the extra cost of SD821 should be absorbed into that, and you could have new OnePlus 3S or OnePlus 3 Plus with advanced processor and different display at the same cost.

Would you buy the solid hardware of OnePlus 3s or OnePlus 3 Plus for that price. Given that OnePlus 3 is well know for its value-for-money image, do you think it would still maintain that recognition at $449 asking price? We think yes, after all, you are also getting SD821, a more refined and powerful variant of SD820.

Do let us know what you think about it.