OnePlus 3 became the first non-Google phone to officially receive three major Android OS updates when it was updated to Android Pie in May 2019. Undoubtedly, this is the best thing to ever happen to those who have wielded the device since 2016, but it’s often said that everything good comes with some bad in it.

For the few weeks that OnePlus 3 has been on Android 9 Pie, plenty of issues have popped up, some even preventing the phone from making the switch to the OS. In this post, we’ve rounded up some of these OnePlus 3 Pie problems and their possible solutions, some suggested by affected users and others provided by the company itself.

Note: You can check out our post on OnePlus 3T Pie update problems – here. 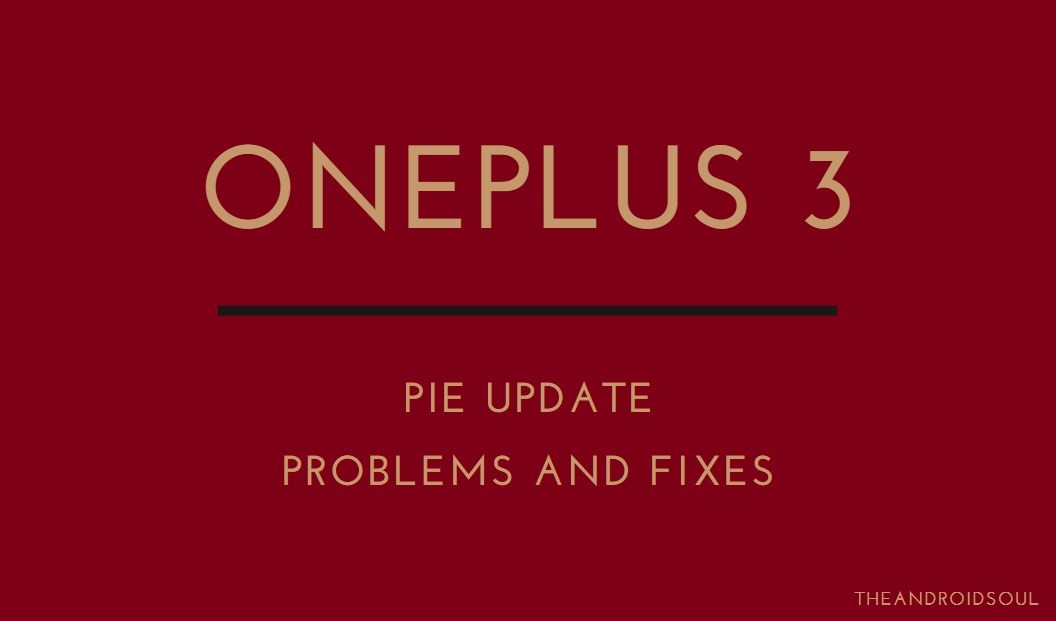 Here are the various problems that have been reported so far. And they are pretty grave, check them out!

Many users are reporting that their device has become extremely slow, lags a lot, and they are even witnessing sluggish UI on what was one of the fastest phones of its time. The problem seems to be very widespread than an issue usually is, which is a major cause of concern.

Unable to upgrade to the latest Pie update

Some owners of OnePlus 3 handsets have been unable to upgrade their device to the latest Android 9 Pie version. This issue is said to be affecting units with an unlocked bootloader, but OnePlus has fixed the problem.

Initially, this issue affected the update to OxygenOS 9.0.2, the first stable version of Android 9 Pie for OnePlus 3. Apparently, OnePlus says the updated OxygenOS 9.0.3 doesn’t have this issue and in case it persists, you can as well grab the ROM from this page and install it manually using the guide in the post.

Several OnePlus 3 users say the screen remains in sleep mode even when there’s an incoming call. This also happens when one connects the phone to a charger, where the phone takes a few seconds before the screen turns on yet the notification light indicator turned on immediately.

Apparently, the phone vibrates/rings/notification light turns on for a few seconds before the screen lights up, something that wasn’t there during the good old Oreo days.

At the moment, no fix has been proposed for this issue. If anything, OnePlus should roll out a software update to fix the bug. Until then, you may want to try out the usual measures that include clearing data or doing a full factory reset after the update.

Some users say the pull-down notification bar glitches during calls, something that’s proving to be a nuisance to several users.

Apparently, the new OnePlus 3 update to Pie has reduced sensitivity in order to prevent accidental touching of the icons in the pull-down notification area when the phone is on your ear. So, to actually pull down the notification bar without issues, simply swipe it from the right side to the middle to open it.

After installing Pie, some OnePlus 3 users say the Gaming Mode feature isn’t working properly. Notifications still show up when the feature is enabled, which is unusual.

Having arrived as a software update, the most likely fix to issues with this feature is another software update. For now, it’s unknown when OnePlus will provide this fix.

It seems the update to Android Pie also did away with the HQ camera mode in OnePlus 3, something several users who enjoyed taking stationary photos are not quite happy with.

At the moment, there’s no known way of bringing this feature back. Perhaps OnePlus will bring it back in a future update based on user demand, but for now, you’ll have to enjoy the updated Pro Mode, improved shutter speed, and more.

It’s nothing unusual that some OnePlus 3 units are experiencing poor battery life and overheating issues after a major OS upgrade. These are common problems that are not just specific to OP3 devices, so don’t freak out.

First thing is to give you’re a device a nice reboot. You might be surprised at what a simple reboot can do to your phone. Next is to establish what’s eating up your battery by heading to Settings > Battery. In case there’s an app that’s consuming too much of your battery, try updating it to the latest version available or simply get rid of it.

Also, check out your display screen settings and reduce the time it takes for the screen to go to sleep via Settings > Display > Sleep. Also turn off wireless connections you aren’t using, e.g. Bluetooth, Wi-Fi, data or even location.

If none of the above works, clearing the cache partition can also fix these issues. This can be done by first turning off the device (don’t restart) and then pressing and holding the power and volume down keys simultaneously to boot into recovery mode. Here, use the volume keys to navigate around and the power button to select the option you want.

As a last resort, a full factory reset might be all you need to fix these and many other issues affecting your OnePlus 3 handset after the update to Pie. Still, we expect that OnePlus will release future software updates that improve battery life and fix overheating issues.

After the update to Android Pie, some OnePlus 3 users say they can’t see the Bluetooth icon in the status bar when the feature is turned on.

This isn’t a bug, rather, Pie is such that the Bluetooth icon only appears when a device is connected to your phone.

Volume button not working or adjusts media only

Several OnePlus 3 units are experiencing issues with the volume button not working at all or if it does, it only adjusts media playback and nothing else.

For those who see the volume defaulting to media as a bug, know that it isn’t. Rather, it’s a behavioral change from Oreo to Pie. To adjust the ringtone volume, tap the gear icon that appears when you press the volume button or simply do so from the sound settings.

After updating their OnePlus 3 units to Pie, some users now say the OTG function isn’t working for them.

To fix this, you must tweak some settings to enable OTG by heading to Settings > OTG Storage and turn on the toggle and that’s it!

Some users say their OnePlus 3 units won’t connect to the internet using mobile data after the update to Android Pie. This issue has at some point been reported by OnePlus 5 and 5T users and it seems it’s spreading to other units as well.

Some say this has something to do with your APN name that changes after the update, so be sure to confirm this before attempting to factory reset the phone.

Screen off animation is non-existent

It seems the screen off animation on OnePlus 3 disappeared with the update to Android Pie, something hawk-eyed users have noticed and are unhappy about it.

At the moment, there doesn’t seem to be any fix for this issue, not even a factory reset will fix it. Hopefully, OnePlus will release a software update that brings back this nifty little feature to the OnePlus 3.

Some users are also complaining that Android Pie apps on OnePlus 3 have one of the worst animations they’ve seen to date, some even equating the developers work to that of a child. It must indeed be terrible!

Not even a factory reset will fix this one, so we hope a software update will be pushed to address the terrible app opening animations after the Pie update.

Several users say Bluetooth connection has become terrible after updating their OnePlus 3 handsets to Android Pie. Sometimes devices connect and sometimes it takes longer than usual before a Bluetooth device connects to the phone.

Usually, a factory reset would fix such Bluetooth related issues, so try performing one on your device. If it doesn’t work, you may have to wait for OnePlus to roll out an update with improvements to Bluetooth connectivity.

Notification alerts from some apps aren’t showing up after the update to Android Pie on some OnePlus 3 sets. This is a common problem after a major OS upgrade, so don’t freak out.

Find the affected apps and try clearing the cache/data. You can also try removing the apps from your phone and then reinstall them. If none of this works, try clearing the system cache/data before finally attempting to factory reset the phone.

There is still no fix for this issue, but if a factory reset doesn’t fix it, maybe a software update will.

Phone turns off after every call

In what seems to be a rare occurrence, a certain OnePlus 3 user says the phone just turns itself off after every phone call. This is a strange one and no wonder not so many have reported about it.

No solution has been proposed for this issue just yet, although you might still try a full factory reset after updating to Android Pie. If the issue persists, you may have to downgrade to the previous OxygenOS version that worked without issues.

Besides mobile data connectivity issues, some OnePlus 3 units are also unable to provide Wi-Fi hotspot services after the Pie update.

OnePlus should release a software update that fixes this issue, at least for those who factory resetting their OnePlus 3 units doesn’t work.

After the update to Pie, several OnePlus 3 devices are showing signs of focusing issues in the camera app, which is annoying to say the least.

This issue might be specific to the camera app, so be sure that it’s the latest version available. Also, try clearing the cache/data of the camera app before a final attempt on doing a factory reset. Even so, we still expect OnePlus to push a software update that improves the focusing of the camera app.

Some users say the Google Play Store is experiencing issues after the update to Pie, where it always says download is pending or seems like its preparing to download but nothing happens.

The first fix would be to clear make sure the installed Google Play Store is the latest version available. If it doesn’t fix your problem, clearing the cache/data of the app via Settings > Apps & notifications > Google Play Store > Storage > Clear Cache should work magic.

With each of the above solutions, reboot your device thereafter and see if the problem persists before trying your next move. Finally, a full factory reset might fix this and many other issues on your OnePlus 3 after the Pie update.

Well, if nothing else works, resetting your OnePlus 3 will be the one solution you can revert to in the hope of fixing whatever issue that is bugging you. Here’s how to reset your OnePlus device. The procedure is the same for all the OnePlus handsets running Android Pie.

→ How to reset OnePlus 3 to fix issues with Android Pie

OxygenOS 9.5.8 update for OnePlus 7 Pro is now rolling out