How To Chromecast Spotify From Your PC, iPhone and Android

You can listen to songs and podcasts using the Spotify app that’s available across all major platforms including Android, Android TVs, iOS, tvOS, Windows, and Mac and the service also has a web player. With support for so many devices, wouldn’t it be nicer if you could play music on your Chromecast-enabled TV? In this post, we will discuss how you can use Spotify on Chromecast using all the devices you use to streaming music on.

Spotify is the most popular music streaming service with over 280 million monthly users. The music-streaming service has earned praises for its vast library of content, user-centric recommendations among a slew of unmatched features.

Related: How to use Spotify 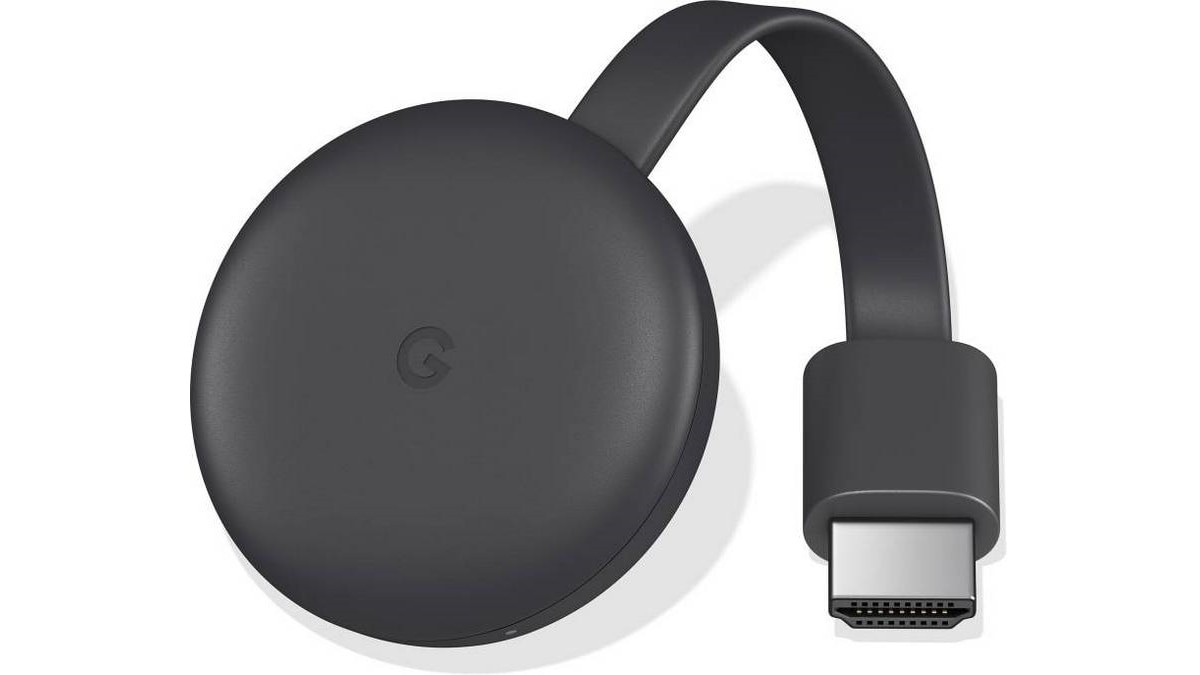 Chromecast is a media streaming device designed by Google that connects to your existing TV to add extra functionality like streaming on YouTube, Netflix, Spotify, and other entertainment services. The device connects to the TV using an HDMI port and incorporates the Google Cast functionality to outsource the content on your mobile device and PC onto your TV.

While in theory, Chromecast is made to show whatever content that’s playing on your phone directly on the TV, what the device actually does is simpler. When you cast using Chromecast, Google will prompt Chromecast to stream the content using its own internet connection when you play it from your phone/computer.

Can you use Spotify on your Chromecast device?

Yes. You can use Spotify directly on your TV using Chromecast and any other device you primarily use Spotify on other than your TV. Spotify on Chromecast works with Spotify apps on iOS, Android, Mac, Windows, and on the web; meaning you can cast music and podcasts via the service on your Chromecast device from your phone or your computer.

To get this done, you will have to rely on the Spotify Connect feature that’s available inside the music streaming service. In addition to streaming on Chromecast, Spotify Connect also lets you listen to music on speakers, TVs, computers, and other devices.

How to play songs on Spotify using Chromecast

You can cast songs and podcasts from Spotify on Google Chromecast using any device that you have around you. Follow the guide below to start playing content on Spotify with Chromecast.

Before you start using the Spotify Connect feature to cast Spotify on Chromecast, you need to make sure that:

Play from iPhone and Android phones

To start playing songs on Spotify on your Chromecast device using your phone, you will have to ensure that you indeed have the Spotify app installed. If not, you can install Spotify on your Android and iOS devices through Google Play and Apple App Store. Once installed,  open the app, log in with your account and subscribe to a Spotify Premium plan of your choice.

Now, go to the current playback screen on Spotify. To do that, tap on the song title that shows up at the bottom half of the screen, just above the ‘Home’, ‘Search’, and ‘Your Library’ tabs. 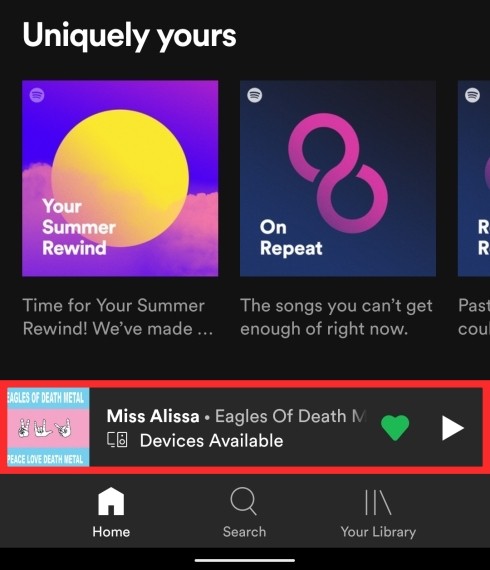 Inside the playback screen, tap on the Devices

icon at the bottom left corner of the screen. 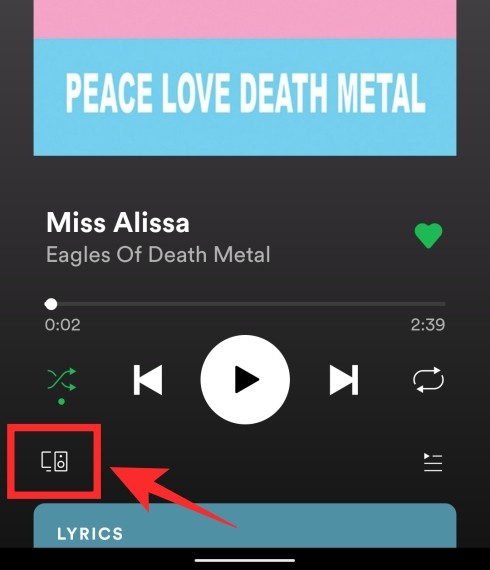 When you do that, a list of devices will appear on your phone which should also include the Chromecast device that’s connected to your TV. The device might not be named as ‘Chromecast’ but will instead be given the name that you set for it on your Google Home app. 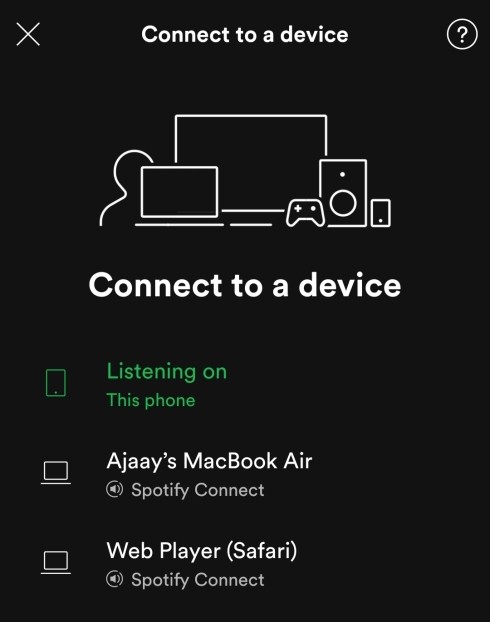 Select your Chromecast device from this list and you will instantly be able to play Spotify songs on your TV enabled with Chromecast. You can then use your phone as a remote to switch songs, pause/play audio, skip, rewind, repeat, and shuffle between tracks the same way you would on your mobile device.

You have to keep in mind that if the playback is paused for more than 10 minutes, you will have to reconnect the Spotify app on your phone to Chromecast as you did earlier.

Play from PC and Mac

Until recently, if you wished to play music on Spotify from your PC to your Chromecast device, you could only do so when using the Spotify web player. The service has now added the support for Chromecast devices to its Spotify desktop app on both Mac and Windows.

You can play Spotify on your computer using either the Spotify desktop app available on both Mac and Windows as well as on the web. Once the app is installed or you’re already on the Spotify web player, you sign in to your Spotify account and subscribe to a Premium plan before connecting it to your Chromecast device.

Now, open the Spotify desktop app or the Spotify web player and play a track/playlist/album that you like. When a track starts playing, you will notice a playback bar at the bottom of the Spotify window. In this bar, click on the Devices

icon at the bottom right corner and you will be able to see a list of devices where you can play the track on. 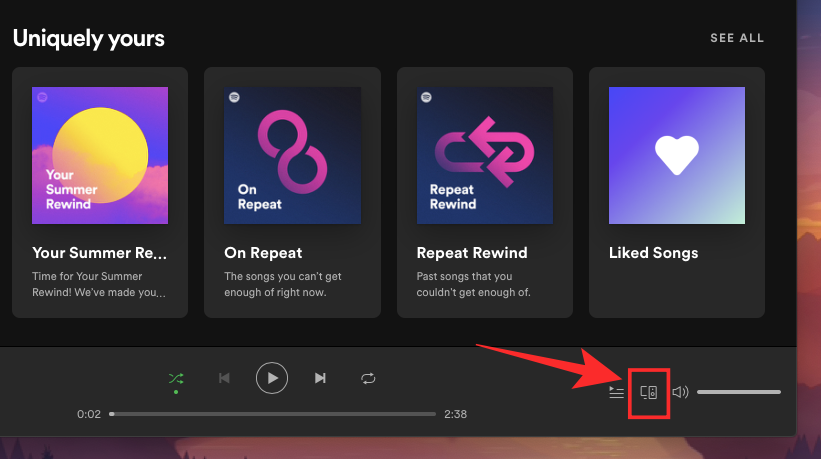 Select the Chromecast device that’s connected to your TV from this list. When you click on your device, Spotify will instantly play the current track on your TV enabled with Chromecast. 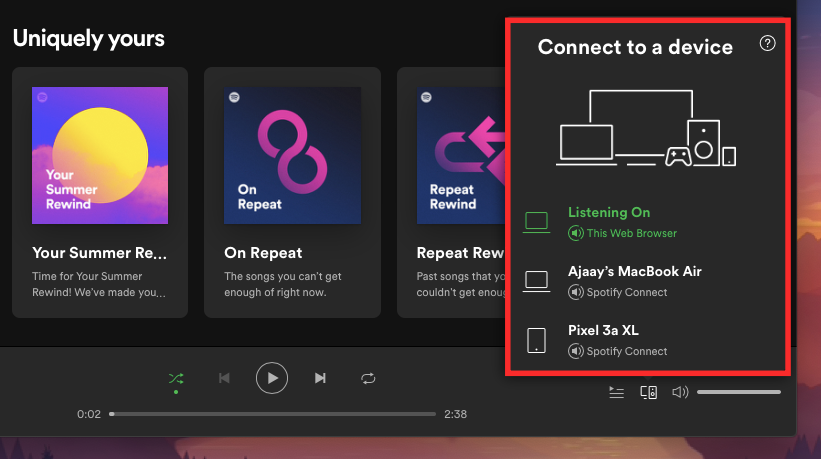 You can also control music playback, adjust volume, skip, rewind, repeat, and shuffle between tracks directly from your desktop. Even if music is paused, Spotify will make sure that you are connected to the streaming device for ten minutes after which you will reconnect the Spotify app on your desktop to Chromecast as you did in the steps above.

How To Copy An Image To Gboard And Paste It Anywhere

How To Play On Stadia On 4G And 5G Mobile Data