Spotify Group session: How to create, join, leave or end the session (Update: Now supports remote co-listening with up to 5 people)

From classic vinyl to seamless audio streaming — the industry has seen a massive shift in the method of music consumption. While many still love the evergreen nature of physical disks/vinyl, most of us have switched over to streaming. Artists, too, feel more comfortable in this digital era of music, as they can simply record and share their work with millions of fans in a matter of minutes.

As you’d expect, the streaming scene is populated with many worthy contenders, all offering similar features and options. However, when it boils down to picking an outright favorite, very few can overcome the allure of the pioneer of the industry: Spotify.

The Swedish company has been in the game for over a decade and continues to tighten its grip with each passing year. With over 280 million monthly users, Spotify is, by far, the most popular service in the segment, and the ongoing COVID-19-enforced lockdown is only helping its cause.

Spotify has always tried to come up with features that improve the overall experience for end-users. And now, during this massive crisis, it has introduced a feature called Group Session, which would allow multiple users to share custody of the music being played. Today, we’ll give you a rundown of the newly-introduced feature and help you get started. So, without further ado, let’s get to it.

Update [July 29, 2020]: Spotify has now updated the Group Session feature, giving you the ability to listen to songs and podcasts with your friends and family, even when they aren’t in the same location as yours. Prior to the release, the feature only allowed you to host in-person group sessions which changes now.

RELATED: How to hide a song on your Spotify playlist

What is a Spotify Group Session?

In an attempt to help families and friends in quarantine, Spotify is allowing its users the option of sharing playback controls with other Spotify users in the same space. In a Group Session, all users have the power to play, pause, skip and modify tracks in the queue — both add and remove. A Group Session automatically closes after an hour of inactivity.

Update [July 29, 2020]: The feature, still in beta, has received an update which now lets you listen to songs and podcasts with others even if all of them don’t reside in the same location.

How to get Spotify Group Session?

Spotify has introduced Group Session only for Premium users. So, to access, you’ll need to buy a premium account. The Swedish streaming company offers Premium for free for 1 month. After the trial runs out, you’ll need to shell out $9.99/month. You can see all their plans here.

How many users can join a Group Session?

During its initial release, Spotify didn’t enforce any upper limit on Group Sessions. However, in the latest beta update (on July 29), the music-streaming service has confirmed that Group Session will support a group of up to 5 people with whom you can play songs or podcasts simultaneously.

How to create a Spotify Group Session?

Spotify uses traditional QR-code scanning to establish a connection between users. The process is fairly straightforward and requires little expertise.

Step 1: Tap on the ‘Now Playing’ bar at the bottom of the screen and go ‘Connect to a device’ menu by tapping on the “speaker icon” at the bottom-left corner.

Step 2: Tap on “Start a group session” to get the sharing code. A session will commence after someone successfully scans your code. 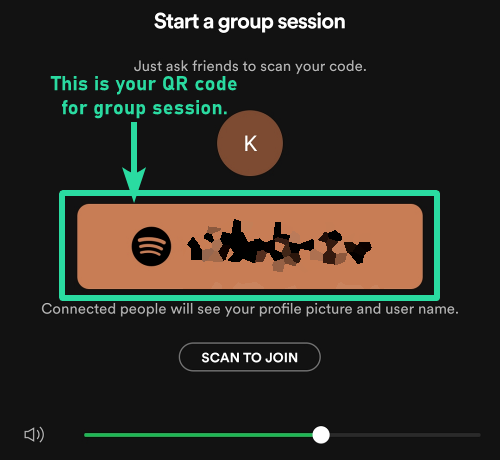 How to Join a Spotify Group Session?

Step 1: After going to the ‘Now Playing’ bar, tap on the “speaker icon” to access the ‘Connect to a device’ menu.

Step 2: Tap on ‘SCAN TO JOIN’ and scan the QR code with the camera that pops up. 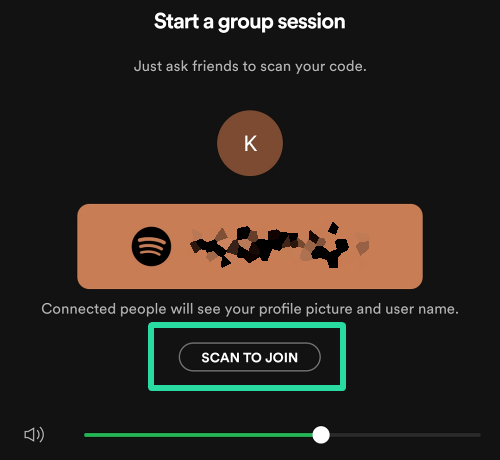 Which device plays the music in a Group Session?

How to leave a Spotify Group session?

How to end a Spotify Group session?

If you have control of the host device, you can easily end a Group Session by tapping on ‘END SESSION.’ Additionally, any group session that hasn’t been active for an hour gets terminated, automatically.

How to hide or remove Meet from Gmail