June 04, 2019: You can now download and install the latest June 2019 security update on your Pixel 3 handset. The update is arriving as version PQ3A.190605.003 for the standard model and PQ3A.190605.004.A1 for the Verizon variant and besides the updated security patch level, you also get fixes for the camera crash issue when recording videos, a Netflix app bug, and improves “Ok Google” accuracy.

May 11, 2019: The third Android Q beta is now available for download over the air for those who were had already enrolled in the program. Of course, any other Pixel 3 user can join the party at this point in time.

For those who are holding out for the stable version, there is also something for you. An update to May 2019 security patch is available for download in the U.S., with Sprint having already detailed the release notes. The software version is PQ3A.190505.002.

April 03, 2019: Google today began rolling out the second beta version of the Android Q update. Coming in as build qpp2.190228.021, the Android Q beta 2 update is available for download if you want to install it manually.

Google’s line of Pixel devices is well-known for being first in line to receive all the new updates. But there’s something you might not know and that is the devices are also guaranteed to get updated longer than phones coming from other brands.

After officially introducing the Pixel 3 duo, Google has posted on its support website revealing the period of support for its latest flagships, but before that, here is the software update timeline.

According to Google, the Pixel 3 will receive Android version updates and security updates for three years after launch. Or until October 2021. This means the Pixel 3 will see Android Q, Android R and Android S OS updates.

At the moment, you can already download and install Android Q beta. 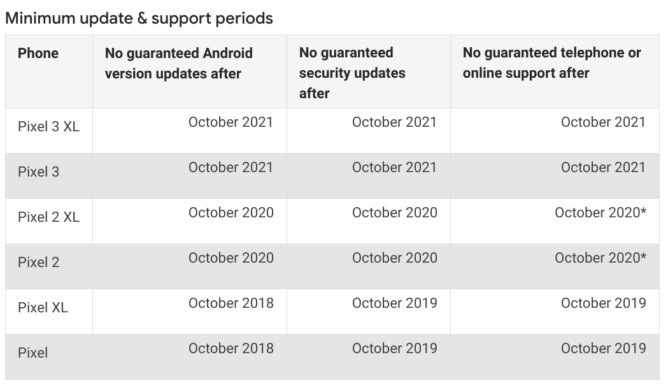 Related: Android Q: Everything you need to know

It’s great news to see Google has renewed its commitment to updates, especially since other Android OEMs are so slow in updating their devices. Just take a look at Samsung, who is yet to start disseminating the stable Pie update on any of its flagships.