Photoshop is hard enough to learn in the unvarnished, unfooled-around-with form that comes out of the box; sorting through the jungle of paid and free Photoshop plugins is a headache that many would rather leave for a tomorrow that never arrives. But that cuts out a whole world of possibilities, many of which can enhance your workflow, saving you valuable time for the other things in life and many times for free.

To prove it, down below we’ve compiled a roundup of some of the most useful, best free photoshop plugins that you can use for everything from digital painting, animation, stock photos and UX development.

At first glance, it’s easy to see just another diffusion filter. Photoshop has one. Why download another plugin, free or not, to do what Photoshop can handily do itself? Indeed, The Sub-Pixel Diffusion is similar to Photoshop’s, but with, well, sub-pixel diffusion; Unlike Photoshop’s diffusion filter which diffuses by whole pixels, Rosenman’s alternative supports fractional diffusion, allowing smoother aliasing that gradates with much softer, less harsh edges. This alone makes it superior to Photoshop’s diffusion, and the fact that it’s completely free and it’s a no-brainer — go download it!

Related: What Is Artboard in Photoshop and How to Create It?

Over 30 unique plugin-effects to add to your toolbelt, completely for free.

The Freebies Pack by Flaming Pear is essentially a big bag of filter goodies for their users, offering a diverse array of powerful filters for users to employ in photography post-processing or design work. With filters like Ornament, which can unwrap curved reflections and convert them to panoramas, to Circle-to-Square which can warp circular objects into squared formats, or even ChromaSolarize which inverts brightness but maintains hue as shown in the picture above, the Freebies pack has a ton of interesting plugins to play around with. And that’s just the tip of the iceberg.

A classic smorgasbord of useful image-enhancement tools that, though buggy, can provide users a robust toolset for free.

The Nik Collection has something of a complicated history; originally developed by Nik Software, the set of image-enhancement tools that included sharpening tools, filters, black-and-white conversion tools, and numerous other effects became close to industry-standard for photographers and designers — at a hefty price tag of $500. That was until Google acquired Nik Software in 2012, first slashing the price to $150 before giving the collection away for free in 2016. By August 2017, however, Google announced they had ceased development and maintenance on the software. It was in 2018 that the current developer, DxO, purchased the licensing for the Nik Collection, renewing development — and the price tag. However, Google’s final version remains available on DxO’s website, called the 2012 Nik Collection (though it’s the 2017 version), completely for free. While you can go ahead and dive into the extended toolset for free, beware that it has grown increasingly buggy in recent years.

Pattern Suppressor is, quite simply, a must-have for photographers and graphic designers looking to get their hands dirty in post. The powerful pattern suppression tool uses complex algorithms to identify repetitive patterns and remove them without damaging the underlying image. This makes it an especially useful tool for photographers looking to extract elements out of fabrics, canvases, walls, and other highly textured objects.

A quick and easy tool for web-developers looking to speed up their workflow.

CSS3PS is a cloud-based Photoshop plugin that lets users quickly convert layers into CSS3. On top of the conversion functionality, CSS3PS supports an array of extra, design-oriented features like text layers, drop shadows, inner/outer glow, and multi-layer conversion. Web designers looking to enhance production speed should consider adding CSSPS to their toolkit to reap the advantages of faster production speed.

ComicKit, as its name suggests, is a set of tools designed to speed up and simplify comic book shading and composition. With highly-customizable features like gradients and sand patterns for rendering alongside zoom and speed-line tools, ComicKit lends itself well to those looking to speed up their illustration process, learn the ins-and-outs of panel design, or those just dipping their feet into comics. Plus, to anybody who makes webcomics, speed is an invaluable resource that ComicKit can help obtain more of. What’s not to like?

A time-saving search tool that sources free-for-commercial-use photos from multiple sites inside Photoshop.

Free Stock Search is an excellent stock photo search aggregator that collates results from Pexels, Pixabay, and Unsplash — all free-for-commercial-use stock sites — and downloads them directly into Photoshop itself. The search aggregator function alone is an immensely beneficial tool for speed-oriented content developers, but the fact that it lets users download directly into photoshop too can reduce image-sourcing time by amazing amounts. This means higher production speed, and easier deadlines, all for free. It also lets users check/uncheck the sites they’d like Free Stock Search to use, and can collect search results from premium stock photo sites like Adobe Stock and Shutterstock too.

A super simple animation tool so powerful and easy to use it’s hard to believe it’s free.

Powtoon is an exceptionally easy-to-use Photoshop plugin that lets users convert a series of artboards into a high-quality animated video in a matter of seconds. On top of the super-quick animation feature, users can also add effects, music, and manipulate on-screen elements to produce some seriously robust content with almost zero learning curve. For those who wish they could DIY animations for presentations, YouTube videos, or rough out animatics in no time, Powtoon is the plugin of choice.

An HCL-based color wheel and assortment of color-related tools for digital painters.

KalleWheel is an easy-to-use color wheel that uses the Hue, Chroma, Lightness color space that lets users target hues while maintaining values more consistently — extremely useful for those who find managing hue and color simultaneously a difficult task. KalleWheel also includes color picking tools, color-lock functions and even basic gamut mapping to help choose pallettes. All in all, KalleWheel is a useful tool for digital painters that’s worth a try — especially since it’s completely, totally free.

Perfect for paid designers looking to speed up their workflow and test ideas without shelling out for licensing.

Shutterstock’s official plugin is an excellent tool for professionals who work with a Shutterstock plan, allowing them to search, curate, and import watermarked photos directly from Shutterstock — all without leaving Photoshop. Watermarked photos can be imported without paying a dime, allowing users to iterate and experiment with design concepts before committing to paid licenses. The best part is that, once purchased, all edits and design implementations are automatically applied to unwatermarked assets.

A handy tool to hang on the utility belt of designers everywhere, Icons8 is an immense library of handcrafted icons for free use.

Icons8 is a must-try for UI/UX designers, giving them access to an immense and ever-expanding library of handcrafted icons, with PNGs completely free-for-commercial-use. The plugin has been in use for over seven years, regularly updated with new additions to its 33 categories of sharp, high-quality icons. Professionals can consider opting for the Pro plan that gives users access to the vectors of each and every icon in the Icons8 library.

An easy, non-destructive sharpening tool that gives your image an adjustable HDR-like effect at the click of a button.

HDR Sharpener, as the name suggests, is an easy-to-use image sharpening tool that amateur photographers and pressed-for-time professionals can enlist to do the bulk of their dirty work for them. With a single click of their mouse, users can increase the dynamic range of their image by a factor of 1-10 — adding sharpness, vibrancy and rich contrast — in a cleaner, non-destructive approach.

Ink is an excellent production aid that helps maintain consistency between an original design-mockup and the ultimate end-product. Developed by a designer frustrated by a lack of cohesion between design and development, Ink automatically creates additional specifications regarding everything from text formatting to layer styles to help designers ensure the resultant output reflects accurately the original design. Well-developed and highly usable, Ink is for professionals by a professional.

Halftone is a quick way to convert images to halftone patterns according to a variety of specifications. Users can choose between a halftone printing style where dot sizes are determined by pixel intensity, as well as dot matrices wherein dot size remains consistent across the image — alongside numerous other variables that artists and designers can play around with.

As seen in the illustration above, the Laplacian Blend is a handy and quick way to merge two images together without undergoing a labor-intensive, manual approach using traditional blending techniques. Laplacian blend uses a complex algorithm that intelligently merges together simple elements of the image while allowing the more complex areas to remain distinct — excellent for designers looking to quickly iterate ideas before committing to full-renders.

Pathfinder provides Photoshop users with the same Pathfinder tool Illustrators have been using since time immemorial.

Pathfinder is, well, Adobe Illustrator’s Pathfinder Panel but for Photoshop. While shape addition, subtraction, combining and exclusion have been available within Photoshop for some time, this extension adds better usability with a real-deal expand function. If you’re looking to migrate over to Photoshop and carry with you some of the vector design techniques you employed there, Pathfinder is just the tool to make your life easier.

Easy Mockups lets designers make design mockups for iOS devices with their eyes closed. It’s as simple as choosing the design template you’d like, the presentation, and then your artwork/background layers and letting the plugin automate the rest. For UI/UX designers looking to quickly iterate numerous designs or make a presentation out of thin air, they’d be hard-pressed to find a faster, more efficient alternative.

Chroma Palette is a powerful tool for artists, illustrators and designers who need to keep track of numerous color sets simultaneously. Whether you’re a concept artist iterating through character designs or a UI/UX designer jumping between artboards, Chroma Palette speeds up your workflow by letting you flick through up to 9 pages with 20 colors each with the press of a few buttons.

A complete toolset to take the headache out of layer management.

Every artist and designer will tell you how much they hate layers. It’s a chore. While they are the superpower of digital art and gateway to untold possibility, kind of like a good posture, it’s hard to remind yourself of good layer “hygiene” when the creative juices are gushing like a burst dam. Layrs Control 2 goes a long way to solving this problem with an array of tools to streamline layer management and keep your life simple so you can focus on the work.

A godsend for concept artists and illustrators looking to speed up their workflow with instantly available pattern generation.

Seamless Texture Generator does as its name suggests. It automatically generates seamless pattern tiles according to specifications. Sounds simple, but for photobashing and other time-saving techniques that leverage photo-textures in concept work, having an effective texture generator on hand is incredibly useful. Whether you’re looking to stretch cobblestones into perspective or quickly stitch together some foliage for a quick paint over, the Seamless Texture Generator knows just where to splice a generic photo-texture for seamless reproduction, saving you time and, of course, money.

What do you think the best free Photoshop plugin is? Let us know, or shoot any questions you might have, in the comments below. 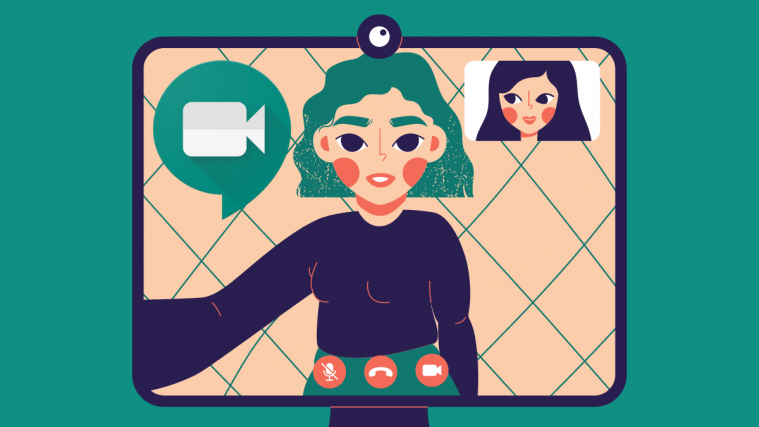 How to Record Google Meet Calls for Free Without Permsission