Right now, the latest update for the Nexus 6P is the biggest one in its history, the NRD90M build that brought the Android 7.0 Nougat upgrade. Well, that could change soon as the Android 7.1 update is expected to hit soon, which will carry the build number of NDE63B.

Breaking down the build no. using the methodology given by Google itself, we get September 1, 2017. 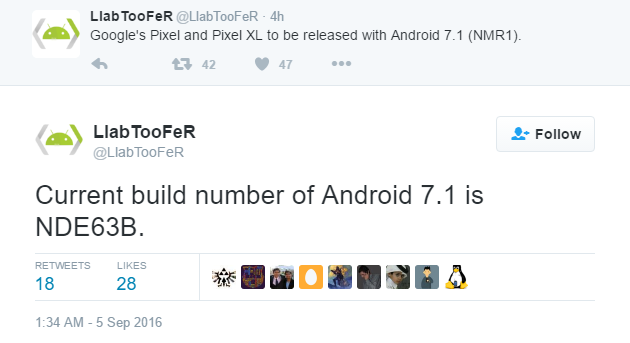 Now, it could be that the new Pixel devices from HTC — which replace our beloved Nexus series, mind you! — are set for release this month, as this build no. is actually tipped — from a very reliable source, LlabTooFer — for HTC Pixel and HTC Pixel XL as their first build that they will obviously come pre-installed with.

We’re expecting the HTC Pixel devices to release only in October. So, that has to be early October, which would bring them in line with the build no’s date. — later release would mean new build no. meant for targeting October release — or that they could be releasing anytime between mid-September to early-October.

Anyway, once the new Pixel devices hit the web or retail shelves, we expect Google to release the NDE63B build carrying the Android 7.1 update for the Nexus 6P, and other Nexus devices like Nexus 5X, 6, 9, etc.

What do you predict?