Huawei was at the MWC 2019 to unveil its next-gen smartphone, the Huawei Mate X. Besides its ability to bend, the Mate X also supports 5G connectivity, but as we all know, none of these technologies are ready for mainstream consumption.

What is ready, however, is the successor to the highly impressive Huawei P20 and P20 Pro – the Huawei P30 and P30 Pro. No, the devices are not ready to begin selling, but they are ready enough to begin showing up online unofficially like it is already happening thanks to German publication WinFuture.

Plenty of cameras with up to 10x lossless zoom

To pick up from where the Huawei P20 and P20 Pro left, the Huawei P30 and P30 Pro are said to come with plenty of cameras. The back panels are largely iterative compared to the outgoing models, where the camera setup is still vertical and located in the top-left corner.

It is the type of lenses used that is changing. Apparently, the P30 Pro will stick to a tri-lens setup featuring standard and wide-angle (in place of monochrome used on P20 Pro) lenses, with the square-shaped third lens seemingly looking like a periscope-like system meant to capture images with up to 10x lossless optical zoom similar to what Oppo has been teasing.

The P30 Pro, unlike the standard P30 that has a dual-LED flash right below the tri-lens camera array, has its LED flash mounted to the right of the main camera and just below it is what seems like a ToF lens that should come in handy when depth-sensing capabilities are needed. 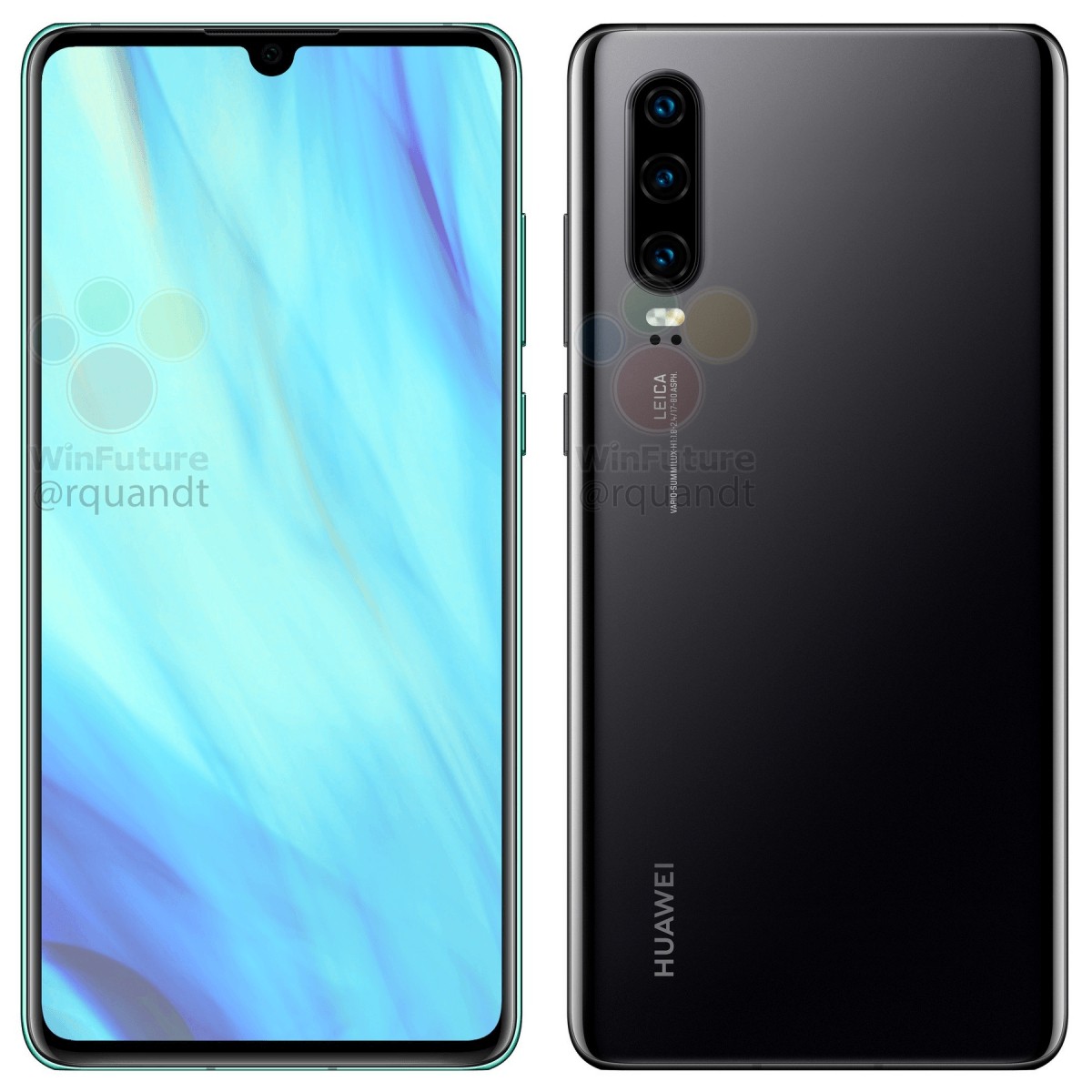 As noted, the standard P30 also gets a tri-lens camera this time around but misses out on the ToF lens. Apparently, it is claimed the P30 will borrow the Mate 20’s camera array featuring a 40MP standard lens allied to a wide-angle lens and a telephoto lens of up to 5x lossless optical zoom.

Being an upgrade to the impressive P20 and P20 Pro, the P30 duo have some significant improvements over the outgoing pair. Gone are the iPhone X-like notches and in comes the cool-looking teardrop-style notch. 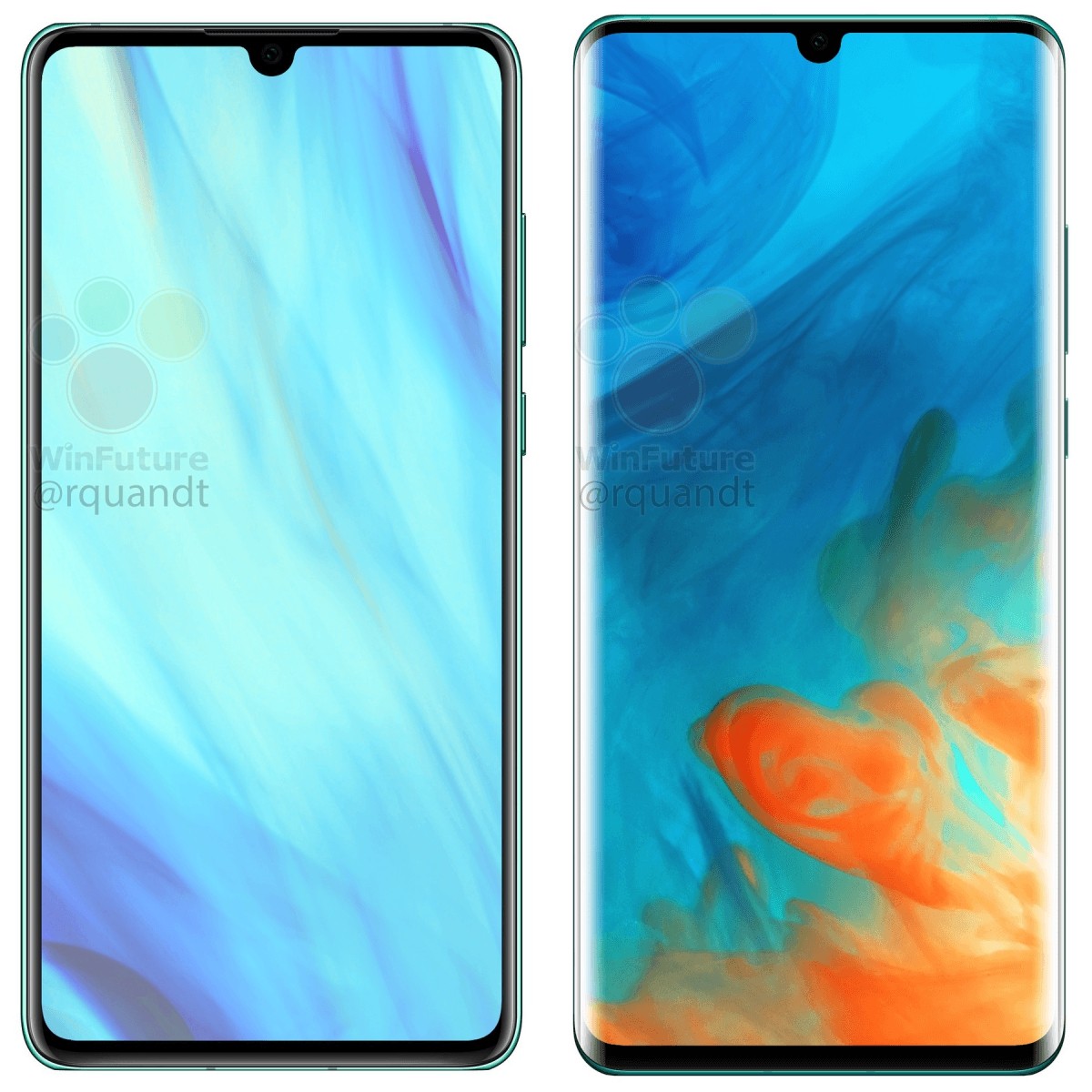 Also, a thinner chin now takes the place of the bigger bottom bezel on the P20, meaning the fingerprint scanner has found a new home under the display screen, just like the Galaxy S10 and Galaxy S10+. What is still unclear, though, is whether Huawei will stick with the optical sensor used on the Mate 20 Pro or get the better, ultrasonic solution used by Samsung.

A closer look at the leaked images also reveals that whereas the standard P30 will ship with a flat display screen, the OLED panel on the P30 Pro will boast curved edges that give it a slightly more premium look compared to its counterpart.

Being high-end phones, the Huawei P30 and P30 Pro should come equipped with the latest hardware specs and features from the Chinese company akin to the Mate 20 series. 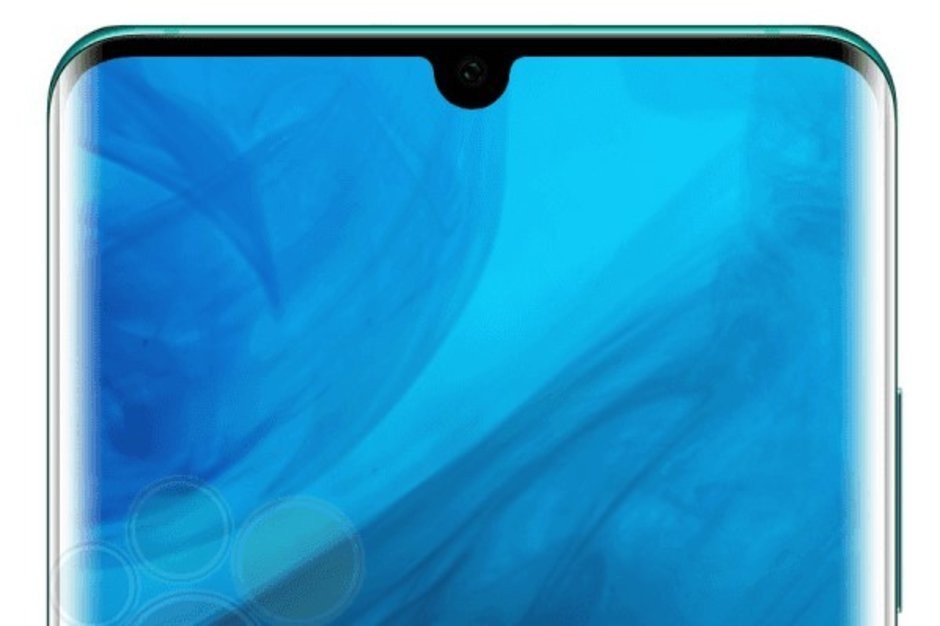 Having been dropped on the previous-gen model, we don’t expect to see the 3.5mm audio jack making a return to the P30 family, but expect things like things like a USB-C port, NFC, and IR port to keep their place. We should also see the new Bluetooth 5.0 and Wi-Fi 6 arrive on the P30 duo.

Huawei already confirmed that the P30 and P30 Pro will be unveiled at an event on March 26 in Paris, France, but for now, we don’t know the price and exact release dates in various markets.