Android and Apple have been at war since the dawn of time. They’ve been pushing each other, learning from one another, and constantly blessing their systems with features that make the smartphone experience more refined. One of Apple’s proprietary features — AirDrop — remained unchallenged for a long, long time. But now, Google and Samsung have finally come up with their own version of AirDrop — calling it Nearby Share and Quick Share respectively.

In this piece, we’ll see what these two are and whether they are any different from one another.

Related: How to force get Nearby Sharing?

Just like Apple’s AirDrop, Google’s Nearby Share allows you to seamlessly exchange media files, contacts, or even location info with a nearby compatible device. Nearby Share shows the devices in your proximity — that support this feature — and lets you share content with only a couple of taps.

As per Google, Nearby Share uses Bluetooth Low Energy, WebRTC, or peer-to-peer WiFi to exchange files, which means that the service works flawlessly even when you’re not connected to the internet.

Nearby Share, which is now rolling out to Android 6.0 and above, works with Android and is expected to get Chromebook support in the coming months. However, as expected, it doesn’t work with Apple devices, and there is no solution for Windows on the horizon, either.

Related: 9 ways to fix Nearby Sharing not working problem

Samsung, as you might already know, is the biggest smartphone manufacturer on the planet. It sells the most phones, it earns the big bucks, and it always tries to one-up the competition. So, in an attempt to take the fight to Apple, Samsung introduced an identical feature to AirDrop with the launch of the S20. Dubbed as Quick Share, the Samsung-exclusive service works similarly to Apple’s AirDrop and allows you to share whatever file you wish with people in your proximity. 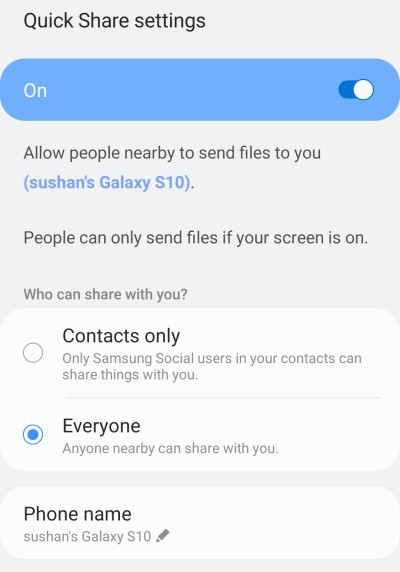 The mechanics are also pretty straightforward. First, you’ll need to go to the file you want to share and tap on ‘Share.’ On the next screen, tap on ‘Quick Share.’ 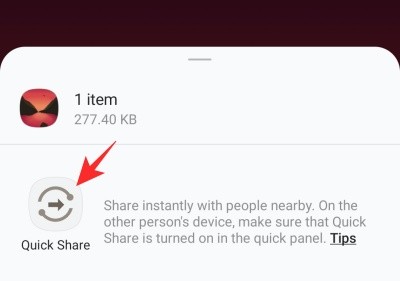 Now, let the device find the devices that are in your proximity. Once it does, tap on the name of the device to share the file. 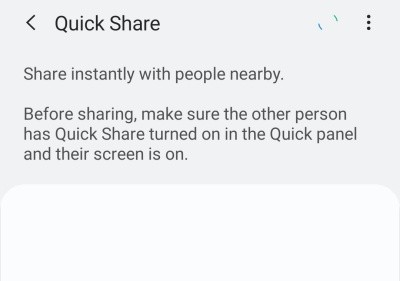 If you want to receive a file using Quick Share, just make sure Quick Share has been toggled on through the quick panel and the screen is turned on. 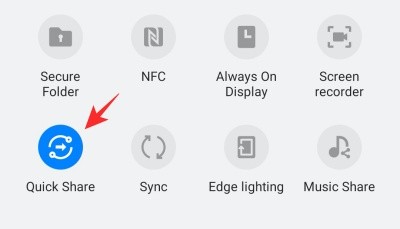 After killing Android Beam with Android 10, Google needed to come up with a more robust solution that’d be widely adopted by smartphone manufacturers. And by the looks of it, Nearby Share just might be the one. Sadly, it has taken 9 long years for Google to match Apple’s AirDrop and is yet to be available to all devices.

Let’s take a look at some of the key distinctions between Google’s Nearby Share and Samsung’s Quick Share.

To start things off, let’s see how widespread these two services are.

Samsung’s Quick Share was first introduced in the Galaxy S20. Since then, the tech has trickled down to older flagships — S10, S10 Plus, S10e, Note 10, Note 10 Plus — and any phone running the latest One UI 2.1. Of course, the service only works on select Galaxy smartphones, running One UI 2.1, which effectively rules out budget or mid-range Galaxy devices.

Nearby Share, on the other hand, only started rolling out to Android devices running 6.0 and above from August 4th. Select Pixel and Samsung devices are getting Nearby Share first, but more and more devices are set to be included in the coming weeks. The Nearby Share addition won’t need a full-blown system update and can be implemented through Google Play Services alone.

Related: How to know if you have Nearby Share on your phone?

Google’s Nearby Sharing looks really solid on paper, but Samsung’s Quick Share easily takes the cake in this particular area.

Samsung’s Quick Share, which made its way to the market a few months sooner than Google’s Nearby Sharing, has the ability to share files with five supported devices simultaneously. This little bonus may not matter to all, but if you regularly engage in large file sharing with multiple people, you’d be glad to have this trick under your sleeves.

We dream of a world where users would be able to seamlessly exchange files with others without thinking about make and model of the concerned devices. Sadly, neither Nearby Share nor Quick Share makes that dream a reality.

Nearby Sharing, for all intents and purposes, is more inclusive than Quick Share, as Google is actively working to make Quick Share available to Android devices. And considering the fact that Android is, by far, the most popular mobile OS in the world, it has the potential to bridge the gap and provide a near-universal solution.  Additionally, Google has promised that Nearby Share would soon work with Chromebooks as well.

Samsung’s Quick Share, on the other hand, is exclusive to the upper-midrange or high-end Galaxy devices. Only devices running One UI 2.1 and above are blessed with the feature. So, unless your friends happen to have a One UI 2.1-powered device, you won’t be able to use Quick Share to exchange files.

Limiting exposure is a crucial aspect of nearby file sharing, and here, we’ll find out which of the two services has the upper hand.

Samsung’s Quick Share is a capable tool, of course, but isn’t the most flexible when it comes to visibility. When you turn it on, you are left with two options — either you can make your device visible to all Samsung users by opting for ‘Everyone’ or you could choose ‘Contacts only.’

If you opt for the latter, your device would be visible to the Samsung Social users in your Contacts. To use this, you’ll need to sign up for Samsung Social by putting down your mobile number.

Google’s Nearby Share, on the other hand, offers a lot of flexibility on that front. You get to choose from three visibility options — All Contacts, Some Contacts, and Invisible.

Samsung Quick Share is weirdly dependent on cloud integration, thanks to its ability to cast to compatible Smart Things devices. The South Korean OEM is one of the most popular TV manufacturers in the world and has clearly tried to bring that into play here.

When opted for a Smart Things device, Quick Share uploads the content to the cloud and then downloads it locally on that device to play. Fortunately, this isn’t the case with local mobile devices — at least, partially. If you wish to share to select devices using Samsung Social, you’d need to be connected to the internet to verify the credentials. Else, you’d have to stay content with maximum visibility.

Quick Share’s newest rival, Google’s Nearby Share, exploits this little vulnerability of Samsung and comfortably comes out on top. As per Google’s documentation, Nearby Sharing has variable protocols — Bluetooth, WebRTC, and peer-to-peer WiFi — which gives it enough flexibility to switch to a friendly standard when the device is fully offline.

So, if offline usage is important, Nearby Share is the clear winner here. (Link to changing transfer protocol)

As discussed, Samsung has tried to use its huge array of devices to its advantage with Quick Share, and the decision to add Smart Things into the mix has worked out well in the end. With a simple tap, your favorite content is pushed to the cloud and the target device downloads it conveniently for seamless playback. However, before trying to cast, make sure that your file size doesn’t cross the 1GB mark. Samsung has also set a 2GB data cap on outgoing, meaning the files you send to a Smart Things device cannot cross the total of 2GB per day.

Google’s Nearby Share doesn’t have the wizardry of Smart Things, but it offers more control over the mode of transmission. Offline sharing is another invaluable addition, and Samsung surely could learn a thing or two from it. And lastly, the robust privacy settings on Nearby Sharing is likely to be much-celebrated — another bit Samsung should look into.

Can I use Stadia controller for xCloud?

How To Duet On Instagram Reels: Workarounds Come To The Rescue!