After hitting FCC certification the much-anticipated, Huawei P Smart 2019 has now surfaced in official press images for the first time. The two images that have appeared showcase the handset from both back and front. The device is shown in two shiny paint jobs: Black and Blue.

From the look of it, design-wise the Honor P Smart 2019 seems to be jiving with the Honor 10 Youth Edition or the Honor 10 Lite. The smartphone features a dual rear-camera setup at top left corner in a vertical layout. The LED flash is positioned right below the two cameras. A round-shaped fingerprint scanner appears in the center of the upper part of the back panel.

On the front, the Honor P Smart 2019 sports a single camera integrated into a tear-drop cutout. The bezel-less panel apparently bears the 19.9:9 aspect ratio.

Reportedly, the smartphone is internally codenamed “Potter” and is geared towards the price-conscious budget segment. It will rock a 6.2-inch LCD full HD+ display with 2340x1080p resolution. Pumping power from under the hood will be the in-house Kirin 710 octa-core SoC clocked at 2.2GHz. The processor includes four ARM Cortex-A53 cores and four high-power Cortex- A73 cores. Aiding the SoC will be 3GB/4GB RAM clubbed with 32GB/64GB internal storage.

The info about the camera configuration is scarce, it is expected that the rear camera setup will tack on a 13MP primary sensor and a 2MP secondary sensor intended for depth recording. On the front, there will likely be a 24MP sensor for selfies and video chatting purposes. 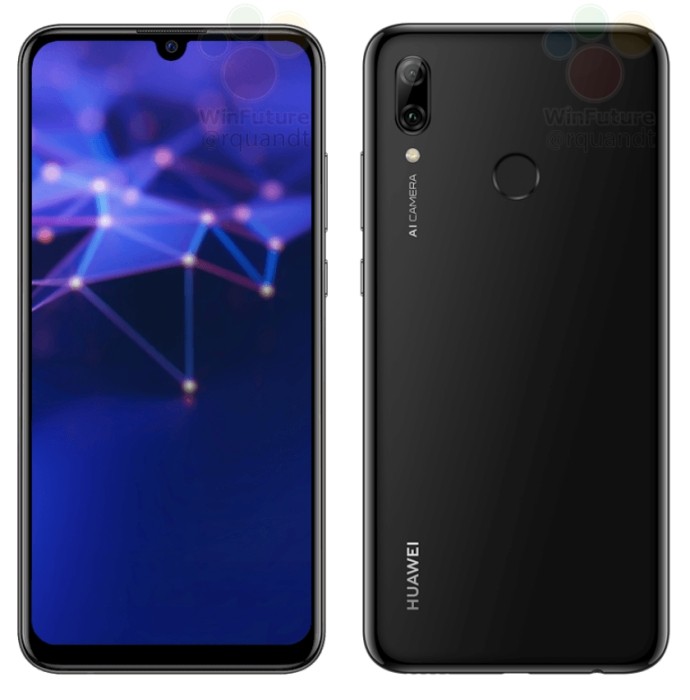 The Huawei P Smart 2019 will run Android 9.0 Pie based-on EMUI 9.0 skin. A 3,320mAh battery is what that will supply juice to the device. The smartphone still has a micro-USB port for drawing the fuel though it is not much in vogue these days.

The Huawei P Smart 2019 is tipped to makes its debut in coming few weeks. And according to reports, it may cost EUR 250. However, nothing is backed officially now. We are looking forward to a formal official announcement in this regard. Stay tuned.