Facebook has ever been the bedrock of social media as we know it, but it too is liable to fail every now and then. Lately, multiple user reports have confirmed that Facebook is indeed experiencing issues with sorting out its bugs. As they try to fix one with an update, another bug pops up.

Facebook is used by billions of people worldwide, and technical issues are not out of the ordinary. But even when the disruption is felt by a handful, Facebook takes notice. While Facebook is busy fixing issues at their end, you may want to make sure you do everything that you can on your part to stay assured that the problem isn’t arising from your end.

Related: Where Did Memories Go On Facebook? How To Find Them

Update, September 15, 2022: Facebook users have shared the problem with logging out today, too. Here are some Twitter posts that we spotted today (1, 2, 3).

In their attempt to sort out previous bugs and issues, Facebook has released two new updates in the past week alone. This is around the same time when users began reporting problems with the app, especially with the logout button.

When they tap on the logout button, the screen refreshes but doesn’t log them out. Or sometimes they may get a “content is no longer available” error message. These problems are not limited to the app alone as many are experiencing the same problems on the desktop site as well.

Yo @facebook you guys have been getting on my nerves lately with the constant problems. I want to log out but I can't 'cause the dropbox won't drop and I get this. Fix this! pic.twitter.com/dRg07tyrh8

Downdetector also shows a spike in user-reported problems for Facebook in the last 24 hours alone. So, take heart in knowing that you’re not alone and that Facebook should be fixing this issue soon.

Issues with logging in and out of Facebook are not new. Though bugs in programming tend to be the most common cause, there can be other common reasons for it as well. At the very least, you should ensure that everything is set aright at your end. So, here are some of the fixes for Facebook log-out issues to ensure the problem isn’t emanating from your end.

The first thing to do is to simply be patient and wait out the storm. Given how recent the last two updates have been (two updates on June 25th alone!), it’s clear that Facebook is well in the trenches fixing up the issue, and could possibly release another update soon enough to get rid of the issue. Until that time, if you’ve been experiencing this issue, you may have to stay logged in.

So..the facebook app's log out button just stopped working. Can only log out by jumping on my pc and logging out of all devices, which causes the app to bug out. Had to uninstall…

Worse, even logging out from all the devices using Facebook settings on your PC (on facebook.com) as given below did not help. But you can try.

2. Log out of all devices on facebook.com on your PC

On your PC, visit facebook.com. Click your profile icon in the top right. On the pop-up, select Settings & privacy, and then Settings. 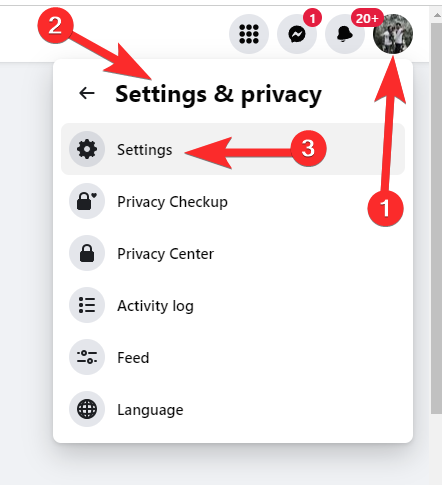 Next, click Security and login in the sidebar on the left side. 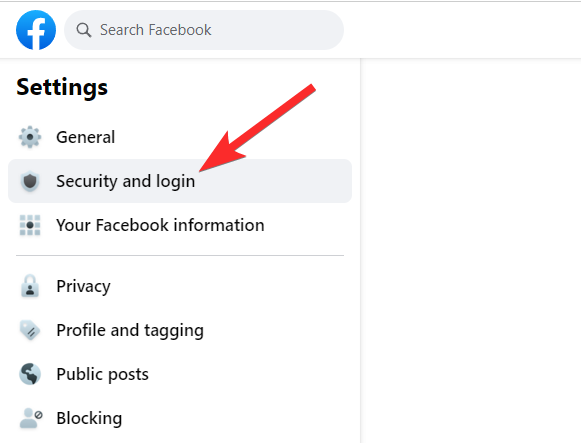 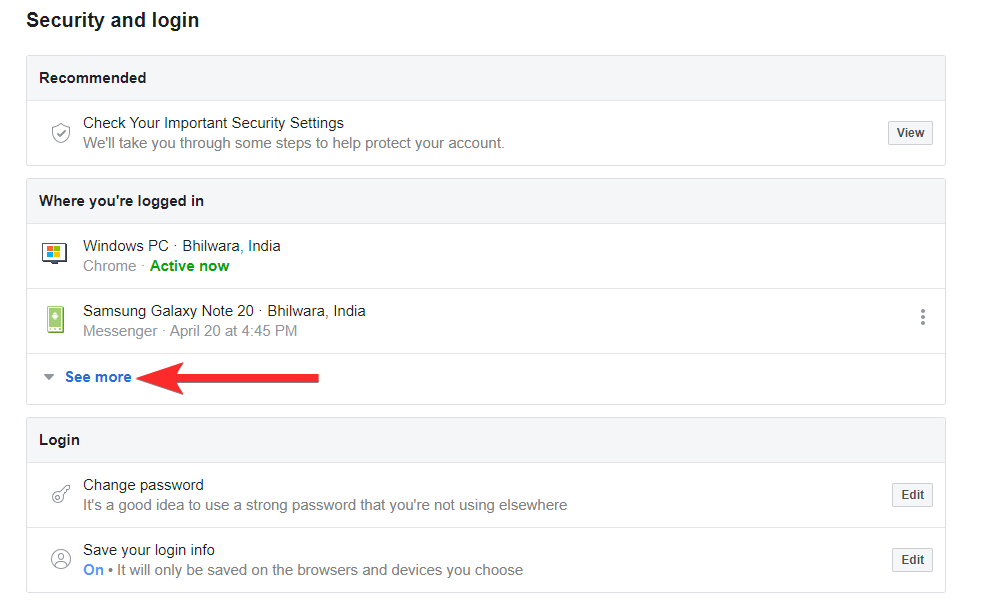 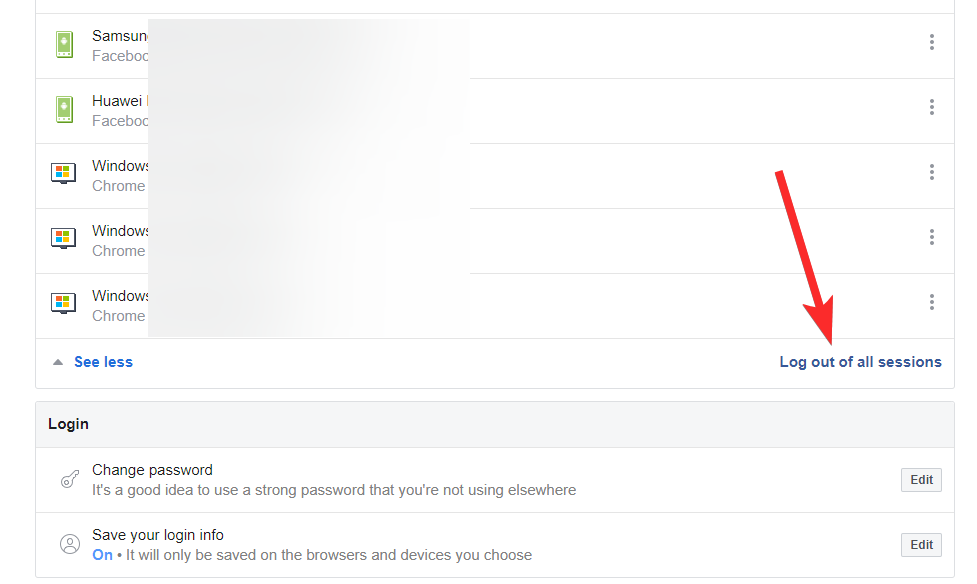 Some problems could be easily solved by a simple restart of the device. So, why not give it a try before trying our hands on any other solution. You know how to restart your divide, right?

While you’re waiting, make sure to check for app updates every now and then. Although auto-update for apps is usually on by default, you should still check for Facebook updates on the App Store or the Play Store on the off chance that it’s not.

If your Facebook logout problems trickle to other apps (as Facebook can be used to login to games and other apps), or if you just don’t want to wait for Facebook to fix it for you, you can simply roll back to a previous version of Facebook.

To do so, first up, uninstall the current Facebook version from your Android device. Then download and install a previous version of the app from the web. Simple perform a Google search for Facebook APK and then download a version that is at least a month old. Since the issue started being reported in the latest versions, we recommend trying out version 320.0.034.118 first (released on June 11, 2021) or older.

6. Ensure you have a good Internet connection

Sometimes, as basic a thing as not being connecting to the internet could be what’s causing the issue. If there is no medium to communicate with the servers, your app won’t register your commands. So, make sure you have a decent internet connection before you try out any further fixes.

Bugs or no bugs, apps can malfunction from time to time, especially so if you’re using updated apps on older devices. When such things happen, the first course of action should be to close the app from your recent-apps screen (tap on the square navigation button or use the swipe up gesture). You might also want to go to App info and Force stop Facebook to ensure it’s turned off completely.

Then open the app again and try logging out again.

While you’re at it, you should also clear its app cache from your phone. App cache stores information that lets you open previously visited pages faster, but this also means that the problems that arose before can come back again if you haven’t cleared Facebook’s app cache in a while. You can do so from the same App Info screen (shown above) by tapping tap on Storage & cache and selecting Clear cache.

If you’re logged in to Facebook on your browser, you should consider clearing your browser cache and cookies too. When you let an app use your Facebook account details, for gaming purposes, for instance, the login tends to take place from the browser. So, any problems that you might be experiencing due to outdated cache will also impact the app that you’ve linked up.

In most browsers, on smartphones as well as PC, the option to clear browser cache and site data is found under More options (or the ellipsis icon)>Settings>Clear browsing data.

For those of you who’re having trouble logging out of Facebook on the desktop browser, the third-party extensions installed on the browser could be the source of your troubles. Though most of them don’t cause any trouble, for the most part, third-party extensions are not as tightly integrated as native apps and extensions and can interrupt the proper functioning of some sites.

Disable these third-party browser extensions, if only to ensure that these are not what’s causing the trouble. To do this (on Chrome), click on the Extension icon in the browser, Manage extensions, and then turn off the extensions one by one to check if the issue is resolved.

All the fingers (and the evidence) seem to point to possible bugs in recent updates and, it seems, users would most probably have to wait for Facebook to fix the problem. Nevertheless, it is good to ensure that the problem doesn’t originate on your end, and we hope we’ve made you all the wiser about it.

iPhone 14 Pro turned off and won’t turn back on? How to fix

How to Use Depth Effect on iOS 16