[Updated: New release notes] Android Pie for Moto G6 rolling out in the US

Update [April 26]: Motorola has updated the Moto G6 software support page with new release notes. While the bit on Android 9 Pie keeps its place, the security patch level now is for April 2019, up from February 2019.

Obviously, the initial release notes didn’t materialize to an actual update, but we do hope this time around the U.S. variant of the Moto G6 finally gets the Pie update. 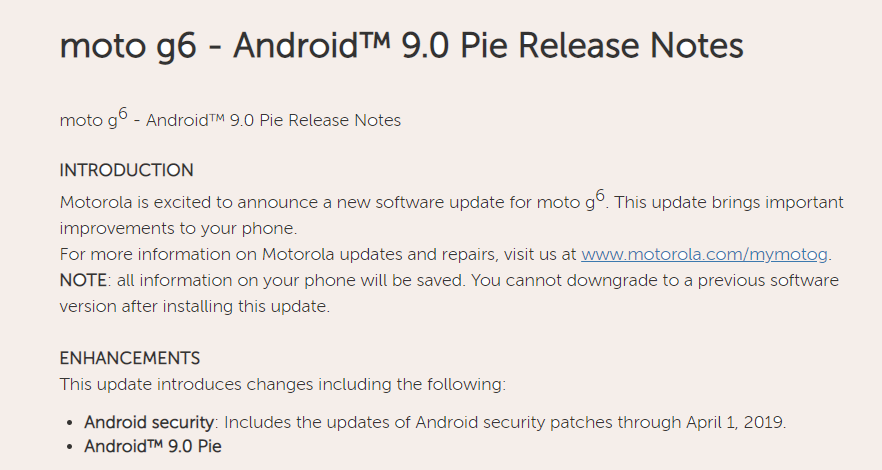 Motorola released Android 9 Pie to the Moto G6 Plus a few weeks ago and now the standard Moto G6 is receiving the same update.

Details of the rollout have been spotted in the U.S., where the company has updated the official Moto G6 software update page with Android 9 Pie release notes. Besides Pie, the notes also mention January 2019 security patches as part of the update.

Expect a download notification to arrive on your phone in the coming days or week for that matter, meaning it may take up to next week or maybe even longer before every Moto G6 unit gets Pie.

As part of Pie, you are getting features like new gesture controls, adaptive battery, adaptive brightness, a much better DND mode, and a colorful settings menu. The new OS also tags along new emojis, revamped split screen, as well as tweaks to the Quick Settings and volume controls.

Last month, Motorola started testing Android Pie on the Moto G6 and G6 Play in Brazil, so it shouldn’t be long before other markets begin receiving the update. The company is also lining up a quartet of Moto G7 phones to be unveiled tomorrow. Check them out below.