Google officially announced the next version of Android Operating system as Android Oreo. It has also released the Oreo 8.0 Beta update for supported Pixel and Nexus devices.

While some users are able to install the update successfully, for others it is/was not a joyous task. Many users particularly those on Pixel XL have been getting an “installation problem” error or “installation failed” error while trying to install the Oreo OTA update. 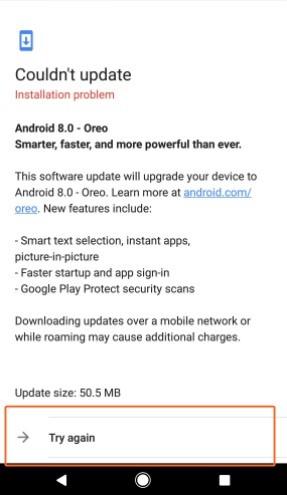 If you are one of them, don’t worry. The problem was from Google side and has been fixed now. David Burke, VP Engineering for Android said, “It was a signing issue for beta users.”

Users should get a new 54MB update in place of older one that weighed about 50MB. Looks like the old update wasn’t signed properly, and the issue seems limited to Pixel XL users updating from DP4 to the stable release.

Check out: How to install Android Oreo on Pixel, Nexus 5X, Nexus 6P and other supported devices

WhatsApp now lets you add links in Status [How to]