The next flagship Mi smartphone from Xiaomi, the Mi 7, is not much far away now. If you weren’t impressed with the Mi 6 from last year, then you probably might get what you want with the upcoming Xiaomi Mi 7.

The Chinese manufacturer has been making some really good phones ever since it came into existence. They make premium quality phones with the latest hardware and price them really affordable. The Xiaomi Mi 7 will be a flagship smartphone that will compete with the likes of Samsung Galaxy S9, LG G7, OnePlus 6, Sony Xperia XZ Pro, HTC U12, and more.

Xiaomi has made a very good name in countries such as China and India. In fact, these are the company’s main markets and due to the demand for low-priced devices in these markets, especially, India, its presence keeps on growing day and night. The Mi 6 was a beast and now rumors suggest the Mi 7 will also be nothing less, if not way better.

There have been a handful of rumors about the Xiaomi Mi 7 already and things are looking good for prospective buyers. Let’s get right into it! 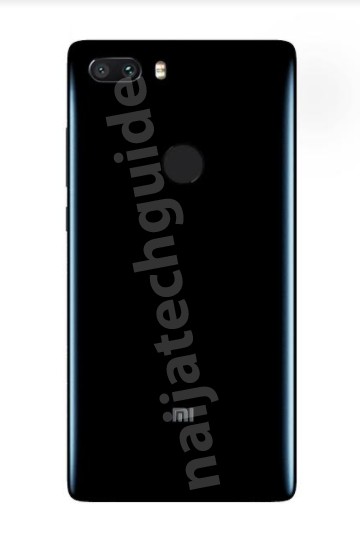 As per most of the rumors and reports that we’ve come across, the Mi 7 will very likely follow the 2017 trend of slimmer bezels and a taller display than usual. Xiaomi was, in fact, the first major name in the smartphone industry to try a design outside the traditional 16:9, coming in with the OG Mi MIX that had an aspect ratio of 17:9.

The tech giant has further refined this design and recently launched the Mi MIX 2, Redmi 5 and Redmi 5 Plus with the much better 18:9 aspect ratio, meaning an even much taller screen than the Mi MIX. The fact that this design is already being used on Xiaomi’s budget phones means that it could be the new trend for the company, further asserting the rumor that the Xiaomi Mi 7 will also sport this trending design.

According to a recent report, the Mi 7 will get two variants: a standard model and a Plus model. Where the former will rock a 5.65-inch screen, the latter will come in with an even bigger 6-inch Samsung-made OLED display with a QHD resolution.

Even better, an XDA report points to an Always-On-Display screen, where users will be able to see things like time, date, up to 3 notification badges and battery level.

The previous Mi 6 sported a glass/ceramic body which gave the device a premium look. As per an alleged Xiaomi Mi 7 image that leaked out a while back, the company seems to be continuing with a glass back panel, but we still don’t know if a ceramic model will also accompany the standard model. 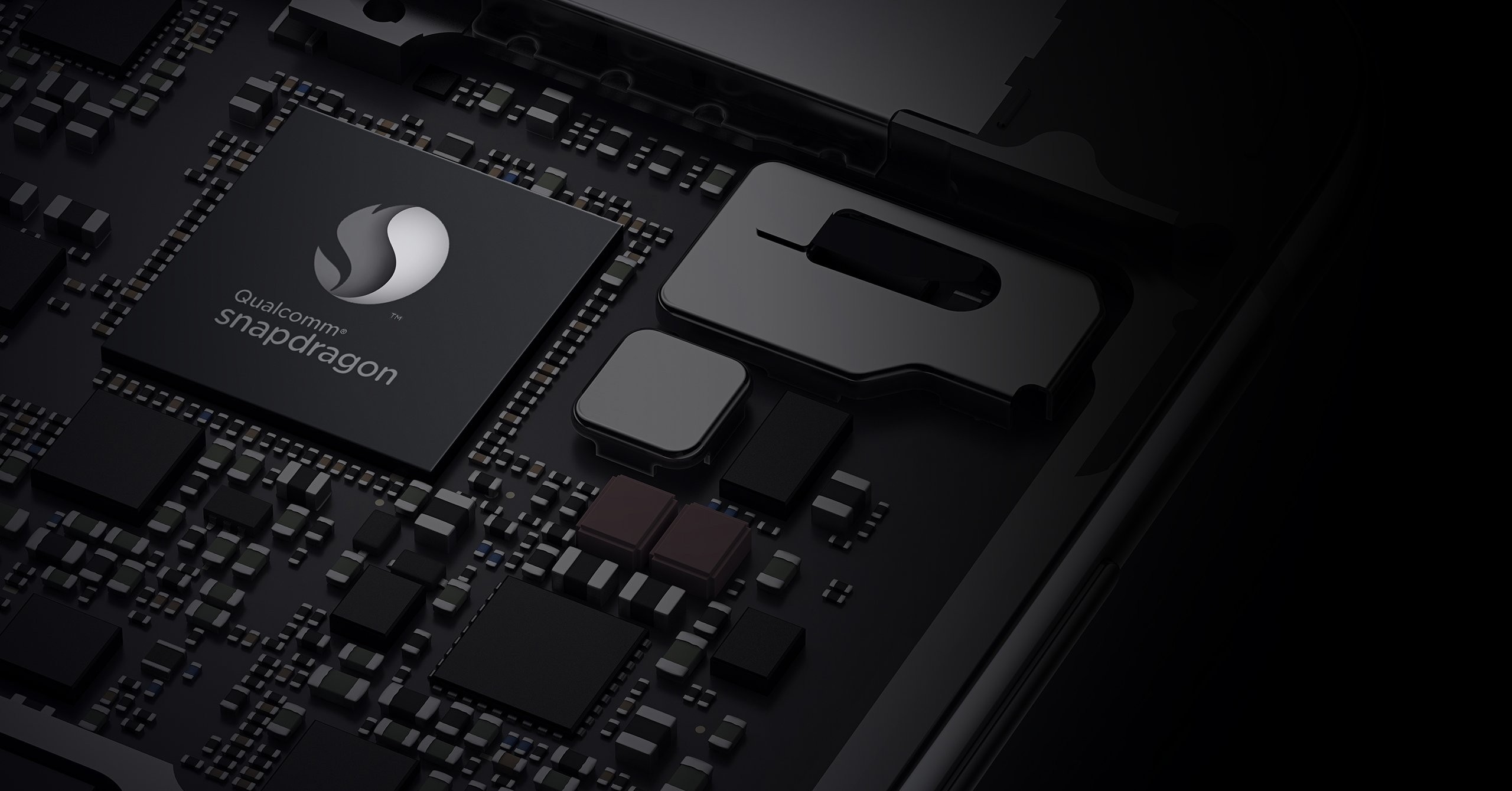 Some of the hardware specifications of the Xiaomi Mi 7 have been officially confirmed. For example, we know that the phone will feature the Snapdragon 845 SoC, as it was confirmed by the CEO of the company.

In yet another leak, a screenshot that claims to contain specs of the Mi 7 has just surfaced online, all but adding more weight to previous rumors. In the screenshot, we can see things like Qualcomm Snapdragon 845, 8GB RAM, 128GB storage and a massive 4480mAh battery, which honestly sounds too good to be true. 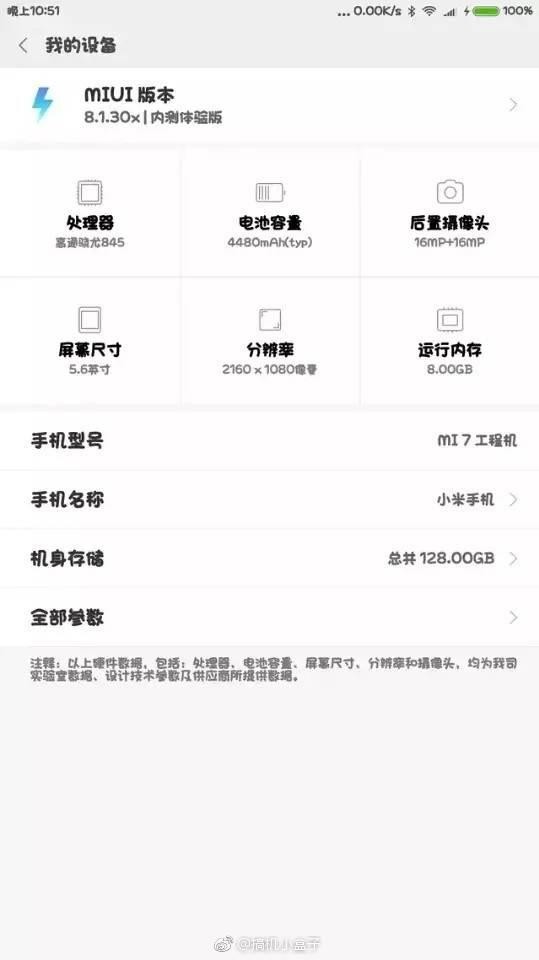 You can also expect an IR Blaster and face unlock feature on the front of the device, similar to that of the iPhone X, but without a notch. Rumors have suggested that it will be as advanced as Apple’s FaceID. Previous rumors have also stated that Xiaomi might get rid of the fingerprint scanner, but we believe this will not happen, especially since the leaked image does suggest the scanner will be relocated to the back panel.

Unlike previous cases where a flagship Mi device was always the first to rock the best and greatest processor available, it appears that this year will see some tweaks to this trend. Apparently, reports surfacing from China suggest that there’s a Xiaomi Mi MIX 2S in the works and this could be the first handset to rock the new Qualcomm Snapdragon 845 SoC. As it is, this MIX 2S will be unveiled before the MWC 2018, thus beating Samsung to becoming the first to rock the SD845 chipset.

The Xiaomi Mi 6 included a dual camera setup which was pretty good in outdoor performance. Expect a similar setup on the Mi 7 as well, but with improved lenses, especially for low-light photography. The cameras are said to have a resolution of 16MP, including the one on the front.

There will definitely be improvements to the camera and the software, so expect the phone to take great pictures straight out of the box. Furthermore, the Mi 7 will include things like real-time Bokeh effect and electronic image stabilization.

Now, this is one thing that most users are always interested in. The previous model came with a decent battery with a capacity of 3350mAh. With the Mi 7 and Mi 7 Plus, we believe the battery capacities will be slightly more., especially since the phones’ footprints will be bigger and thus able to accommodate bigger batteries.

Despite the too-good-to-be-true rumor that points to a massive 4400mAh unit, a recent discovery made by XDA points to a 3170mAh battery unit. As for the Mi 7 Plus, we could be talking a slightly bigger 3500mAh unit, but don’t be surprised if things get a little bigger. Also, as mentioned earlier, the devices will most likely support wireless charging as well as the typical wired fast charging technology via a USB port, which will also double as a headphone port. Whether Xiaomi will jump to the newest Quick Charge 4.0 is still unknown, but hopefully, it does so.

In terms of software, the Mi 7 will ship with the latest Android Oreo. Since current phones are either running MIUI 9 or will be getting the update soon, the Mi 7 will definitely come with MIUI 9 that’s based on Oreo (as of this writing, MIUI 9 is based on Android Nougat). This will include several new features and a much cleaner interface than before, but more importantly, Project Treble will be baked in the device out of the box.

Yes, the question that is on everyone’s minds. When will Xiaomi announce the Mi 7? Well, we have had mixed reports regarding the launch of the Xiaomi Mi 7. Where some had pegged the date to MWC 2018, newer reports claim otherwise.

According to latest reports, we should expect the Mi 7 to hit stores sometime in June 2018, in China whereas release for India and Europe could take Q3 2018.

Another important question. How much will the Xiaomi Mi 7 cost? Since Xiaomi is known not to charge a lot of money for their flagship smartphones, you can expect the Mi 7 to be priced favorably. Rumors suggest that the standard variant may start at 3,000 Yuan, which is about $475, effectively making the Mi 7 the most expensive in the series.

Best Honor 7X cases available in the US and India