WhatsApp, one of the most popular chat apps out there, is getting a new feature on Android called Picture-in-Picture mode or PiP. The feature has been available for iOS users for quite some time, but starting this week Android users with the beta version 2.18.301 installed will be able to use it too.

PiP allows Android users to play videos from YouTube, Facebook or Instagram without leaving the WhatsApp application. The video will be displayed in a small window within the messaging app.

Even so, the folks at WABetaInfo who first noticed the PiP is now available, write that the feature is still not fully functional. For example, when a user leaves the chat where the video has been shared, the video stops. This doesn’t happen on iOS. But since PiP is still in beta for Android, we shouldn’t be too surprised that there are still some bugs that need to be addressed. 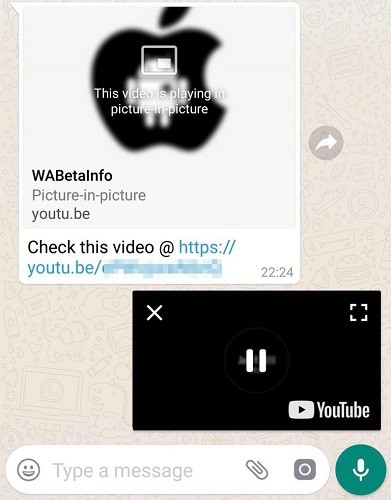 In case you have already updated to the latest beta version (2.18.301) and you still can’t see the new feature, try and reinstall WhatsApp (not before backing up your chat history, though).

Related: How to create a second WhatsApp account without an actual mobile number for free

The new feature should work for smartphones running with Android 4.4 KitKat and above.

Are you seeing PiP mode in your Android WhatsApp app? Let us know in the comment section below.