Samsung started rolling out the new One UI to a bunch of its wearables that include the Galaxy Watch, Gear S3, and Gear Sport three weeks ago.

Today, the software has arrived on the T-Mobile variant of the Galaxy Watch as version R805USQU1BSE3 and weighs in at a huge 118.5MB.

As part of One UI, users of the Galaxy Watch will now get things like a refreshed look, ability to check info on the watch at a quick glance, improved workout and sleep tracking, a new workout profile for outdoor swimming, and quicker tracking of workouts than before. 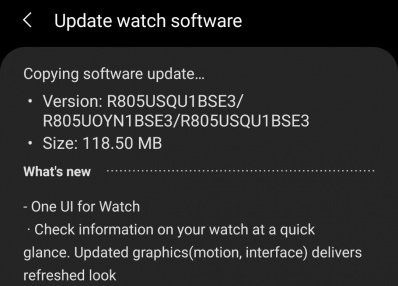 Of course, you should also expect not just an updated settings menu, but also new settings in the revamped One UI as well. The update also promises improved battery life on a single charge.

T-Mobile has just started rolling out the One UI update and its typical that OTA updates take time, so you may not receive yours today or even tomorrow, but it’s coming.