Update [May 05, 2017]: Verizon is now seeding an update to the Galaxy S5. The update going by software version G900VVRS2DQD1, applies the April security patch to your device. The update also includes fixes which iron out a few bugs and boosts system performance too. If you haven’t received the update check manually by going to Settings » About » System software.

The Galaxy S5 Plus also received a new update today. The update is identified as build G901FXXS1CQD6, ans this too installs the April security patch. The update also provides the usual host of minor performance tweaks and system usability improvements.

Update [May 01, 2017]: We’ve now entered May and AT&T has just managed to push out the April security patch to the Galaxy S5. The update arrives as software version G900AUCS4DQD1 and also includes a few necessary fixes. System performance has also been tuned with minor optimizations being included in this build.

Update [April 20, 2017]: The April security patch is now making its way to the Galaxy S5. The update comes in as software version G900MUBS1CQD1 and essentially keeps your device safe from malware and unknown threats on the internet. This build also delivers minor performance upgrades along with a few bug fixes.

Update [April 11, 2017]: The Galaxy S5 is finally receiving its March security patch from Verizon. The update is being seeded over the air as build  G900VVRU2DQC2. Issues faced by Outlook 2007 and 2003 users have now been fixed along with an update to the Amazon Shopping app. This update also includes the usual set of bug fixes and system optimizations over the previous build which was G900VVRS2DQB2.

Update [April 05, 2017]: AT&T is now pushing out the March security patch OTA to the Galaxy S5. Coming in at barely 15MB, the update brings performance and system stability improvements over the previous build. The Marshmallow based update with build number G900AUCS4DQC1, also fixes a few known bugs in addition to installing the security patch. That aside, the possibility for the Galaxy S5 to receive Nougat looks pretty bleak.

Update [December 28, 2016]: Verizon has released a new update for the Galaxy S5 which installs the latest December security patch. The build no. of the update is G900VVRS2DPL1, and is based on Android 6.0.1. If you looking for the Nougat, you are gonna be disappointed as that is not on the cards for Verizon and Samsung. 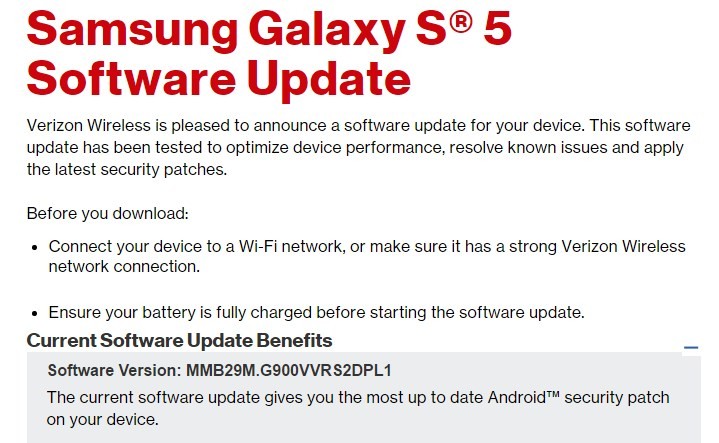 Update [December 16, 2016]: T-Mobile has rolled out an update for the Galaxy S5, which brings the November security patch to the device. The update comes as software version G900TUVS1GPK3, and also improved the data on roaming. To experience Nougat on Galaxy S5, the CM14 ROM remains your best choice. See all CM14 ROM Downloads here.

Update [October 28, 2016]: AT&T is becoming the first carrier today to bring the October patch update to Galaxy S5, and for doing so, it released the G900AUCS4DPH4 build. The PH4 update is in contrast to PJ* updates we have seen for the like of Galaxy S6 and S7 sets, but it nevertheless brings the latest security patch to the device, which is good to know. The OTA comes in size of 60MB, BTW.

Update [October 14, 2016]: Like the Note 4 and Note Edge today, the Verizon S5 is also receiving the same PG2 update that brings the latest security patch to the device. Verizon says it’s the latest, so we’d like to think it’s October one, but we don’t have confirmation of it right now. The full software version of the update is G900VVRU2DPG2, BTW, in case that’s what you wanted to know.

As we told you earlier, that even though Samsung won’t send an OTA piggybacking Android Nougat, the unofficial update tunnel known as custom ROM will come to rescue of S5 users to get them the taste of Nougat. We’re seeing support for MSM8974 chipset in CyanogenMod 14’s code snippet, which basically means that CM14 will be compatible with the Galaxy S5. Kudos! Let’s hope the first ROM is out pretty soon.

Update: Without looking to add further pain to Galaxy S5 users who may be feeling very disappointed coming to fact that it’s their device’s turn this year to miss out on official build from Samsung for the latest Android OS update in Nougat, we would like to inform you guys that we finally have the Nougat release date, and it’s August 22. According to Telus, that’s when it would hit the 7.0 OTA update release button for Android N for its Nexus 6P and 5X. So, there you have it. You, the S5 users, will be witnessing the Android Nougat rollout on devices released within last two years, while you wait for the unofficial 7.0 update, via CM14 perhaps. That’s very hard to watch, but it’s the truth. Maybe time has come you replaced the Galaxy S5 appropriately, no?

Update [August 27, 2016]: T-Mobile has published a list of devices for which the Android Nougat update is under development by the OEM, and that doesn’t include the Galaxy S5. Long discontinued, this is the official confirmation that the S5 won’t receive Nougat update, although hardly surprising. Though, unofficial update via CM14 or other ROM should come in next few months.

Almost all Galaxy S5 variants have got their share of big update in Marshmallow, but when it comes to Android Nougat, situation looks more grim than grin. The Android 7.0 update for Galaxy S5 looks very unlikely, although Samsung is yet to deny the update.

Why we feel the absence of official 7.0 update for S5 looks more likely than presence, is because the Nougat update will be releasing more than 2 years after S5’s launch — and OEMs don’t usually provide update support for a device 2+ years old.

So far though, Samsung has been dutiful towards S5. The Galaxy S5 has received Marshmallow update the world over, no doubt, and even the carriers that make their users suffer a lot when it comes to massive Android version upgrades, have updated their S5 sets to Marshmallow.

For example, on June 1, even the Verizon Galaxy S5 received Marshmallow, which is great because after two years of launch, it’s easy to forget about the device.

But will Galaxy S5 get Android Nougat, a major Android version upgrade released more than two years later than device’s launch? Well, the answer is no.

Because Android upgrades are an issue, Google laid down some guidelines on this a while ago: and there Google, even the Google, clearly stated that OEMs should look forward to release major Android upgrades for their devices that are released within two years of device’s launch.

In fact, even the Nexus devices — the most update friendly — don’t receive updates beyond two years, except for security fixes involved. To put it in perspective, the famous Nexus 5 won’t be receiving the Nougat update, which is being released full two after the 5 launched in October 2013. 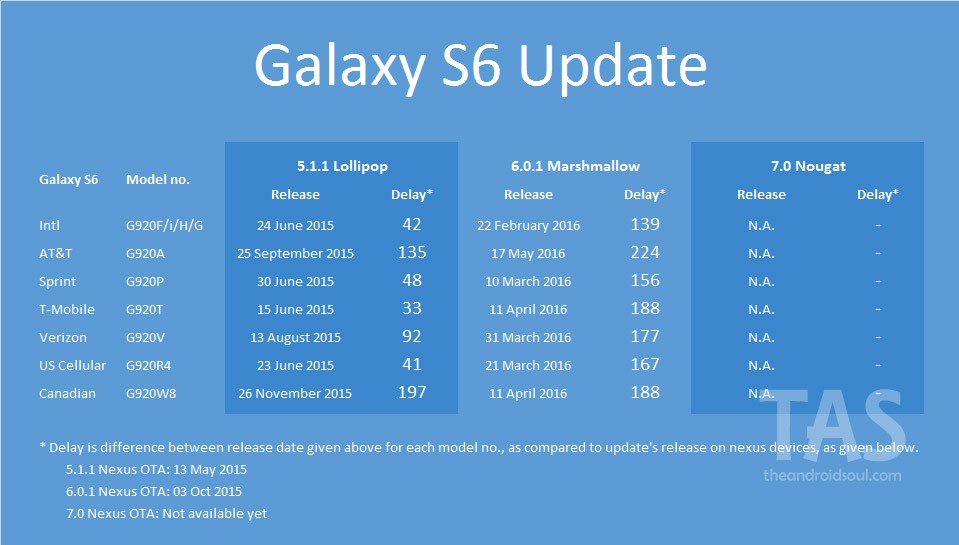 Given above is a update timeline of Galaxy S6 (click here for more info), which shows the updates received by the device over the course of its lifetime so far. Because the S6 isn’t two years old by the time Nougat is released by Google, it will definitely receive the coveted Android 7.0 update.

Same cannot be said for Galaxy S5, which was launched with Android 4.4.2 KitKat on-board, and has seen the journey to Marshmallow, which is what we think its final destination as regards Android updates involving change in version.

Expected release date: Never. Though, it could arrive unofficially via custom ROM like CM14 sometime in Q1 2017.

Because the S5 is now more than two years old, and the Nougat update will arrive only now, we don’t expect Samsung to release the update for the device.

That’s not harsh, either.

Each major Android update involves lots of work for the OEM, what with certification and all done with different carriers and agencies. With a large portfolio of devices Samsung boasts, supporting even a flagship device after it’s two years of age is truly unexpected.

That said, we would see Android Nougat hit Galaxy S5 via unofficial channels. Like, CyanogenMod 14. The CyanogenMod ROM is less in demand on Galaxy S6 and Galaxy S7, but till the S5, the hardware was supported well by ROM, and right now too, the CM13 is available in pretty good condition for the S5.

So, with CM14, there remains solid chance that international Galaxy S5 see the Android 7.0 update, which it most probably will. It could be till Q1 2017 that we see Nougat release unofficially via custom ROM for any Galaxy S5.

Expected release date: Never. Though, CM14 looks the likely gateway to Android 7.0. Q1 2017 is when that could be come reality.

As we told above, we don’t expect Samsung to release Nougat build for any Galaxy S5, so the only way AT&T Galaxy S5 gets Nougat is via CM14 custom ROM. As of today, AT&T’s S5 is supported by ROM on CM13, so there is good chance it will see CM14 too.

We expect CM team to release first builds of next CyanogenMod ROM, the CM14, by December 2016, on nexus devices. Galaxy S5 should be supported in next month or two of that, thus which is when we could see Nougat arrive unofficially on AT&T Galaxy S5.

Because CM ROM is AOSP based, you won’t see TouchWiz on these unofficial Android 7.0 update, but that’s a good thing as stock Android UI is far more pleasing and beautiful than Samsung’s TouchWiz-laden one.

Because CM13 custom ROM exists for Sprint Galaxy S5 too, we’re hopeful the device will be scoring a CM14 ROM too, which will be based on Android 7.0. But surely no official Samsung Android 7.0 build for the Sprint S5, either.

And that remains the only source through which Sprint S5 see a day in Nougat as we don’t expect Samsung to come out with a Nougat release for any Galaxy S5 set, let alone the Sprint’s.

Read more about CM in the AT&T Galaxy S5 Nougat update section above.

Expected release date: Never. CyanogenMod 14 is the only hope. Q1 ’17 is when we could expect the unofficial Nougat update to hit T-Mobile Galaxy S5.

But in Android’s world, there are custom ROMs, and they remain a good source of Android upgrades, even today. We’ve seen even the ages old devices like Galaxy S and S2 boot up on Marshmallow thanks to custom ROMs, so expecting an Android 7.0 based ROM on T-Mobile Galaxy S5 isn’t an ill-conceived thought at all.

We expect CM14 custom ROM to bring Nougat to T-Mobile Galaxy S5 by Jan-Feb 2017, because is well supported by CyanogenMod team as it currently rocks a good CM13 build.

Via CyanogenMod 14 custom ROM, the Verizon S5 could be sporting Android 7.0. When that would happen though? Well, for Verizon, it could be till March-April 2017 that a CM14 build drops by.

Expected release date: Never. As said above, CM14 is the only ray of light gor US Cellular Galaxy S5 users too to see their device rock Android 7.0.

Same as that for Verizon Galaxy S5.

For more, see the section above for T-Mobile Galaxy S5 Nougat update.