Ah, Monopoly. The most effective way to unmask the unrelenting greed and moral corruption of loved ones since 1935. Hasbro’s classic board game has been going strong for 85 years and, with people stuck at home nowadays, is seeing yet another explosion in popularity.

Now that everyone’s playing the world’s finest Pitiless Landlord simulator, you too can experience the sheer joy of sending friends and family into homelessness and bankruptcy with our guide, the best guide, collected and tested over hundreds of Monopoly games. We’re not joking.

How to Invest Your Money 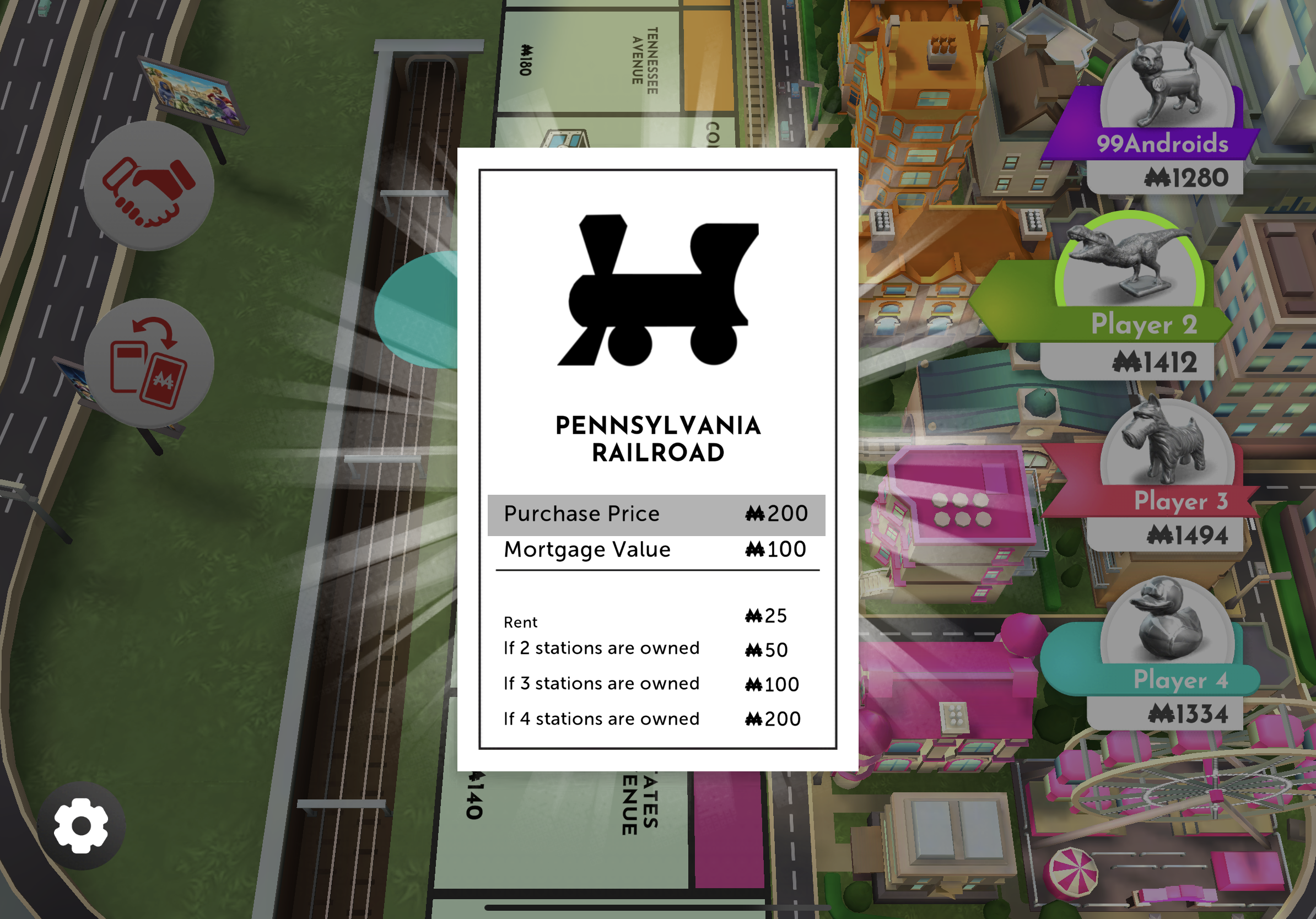 Downplay their importance in trade and if a player has any, always ask for them. Railroads don’t win the game on their own but are a lifeline for feeding monopolies and paying rent until you have one. A good tactic is, while trading two properties, to ask for a second, unreasonable property first and then “settle” for the railroad instead.

Never, ever buy utilities for more than $70

Some say never buy them — but that’s not true. If you land on a utility, auction it and bid up to $70 for they can be mortgaged for $75. 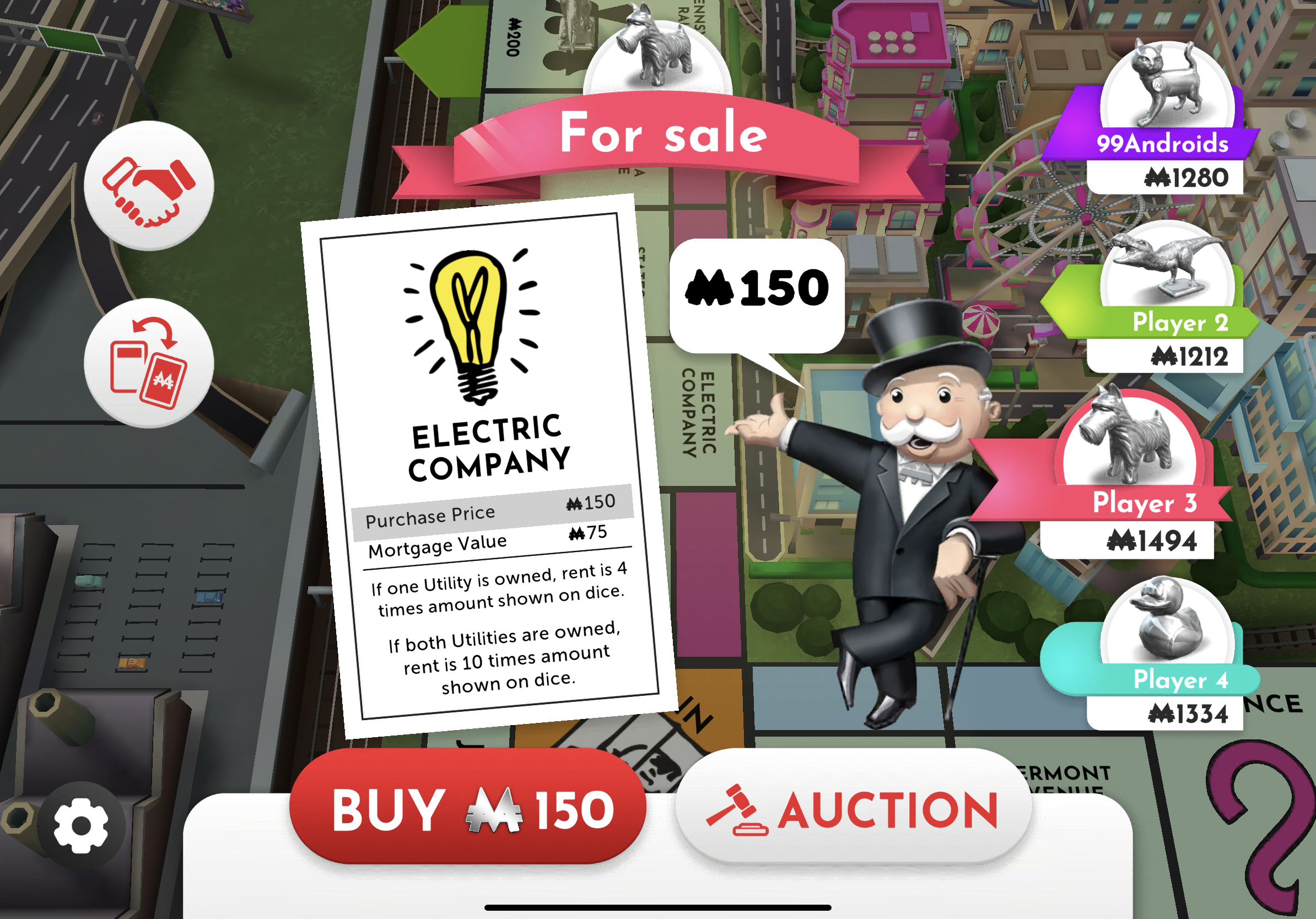 Keep Enough Cash to build 9 houses in one go

These are the three properties with ‘Advance To’ cards. Wherever players are on the board, there’s always a chance they’ll get sent to one of these three. Be prepared; Whenever building a new tier of houses on your color set, start with these properties first.

The wise man keeps buffer cash in case he lands on someone else’s monopoly. The wiser man spends his buffer cash the moment he’s passed the danger zone and others are likely to land on his own monopoly. Remember, cash is a weapon — use it when the odds of landing are in your favor.

Always be the first to build — even if you have to mortgage.

The number one priority in Monopoly is, of course, to get a monopoly first. When you do, don’t hold back — risk is almost non-existent without a competing color set on the board. Spend every single dime you have on development, then mortgage every other property you have and spend more.

In the first few rounds, buy everything 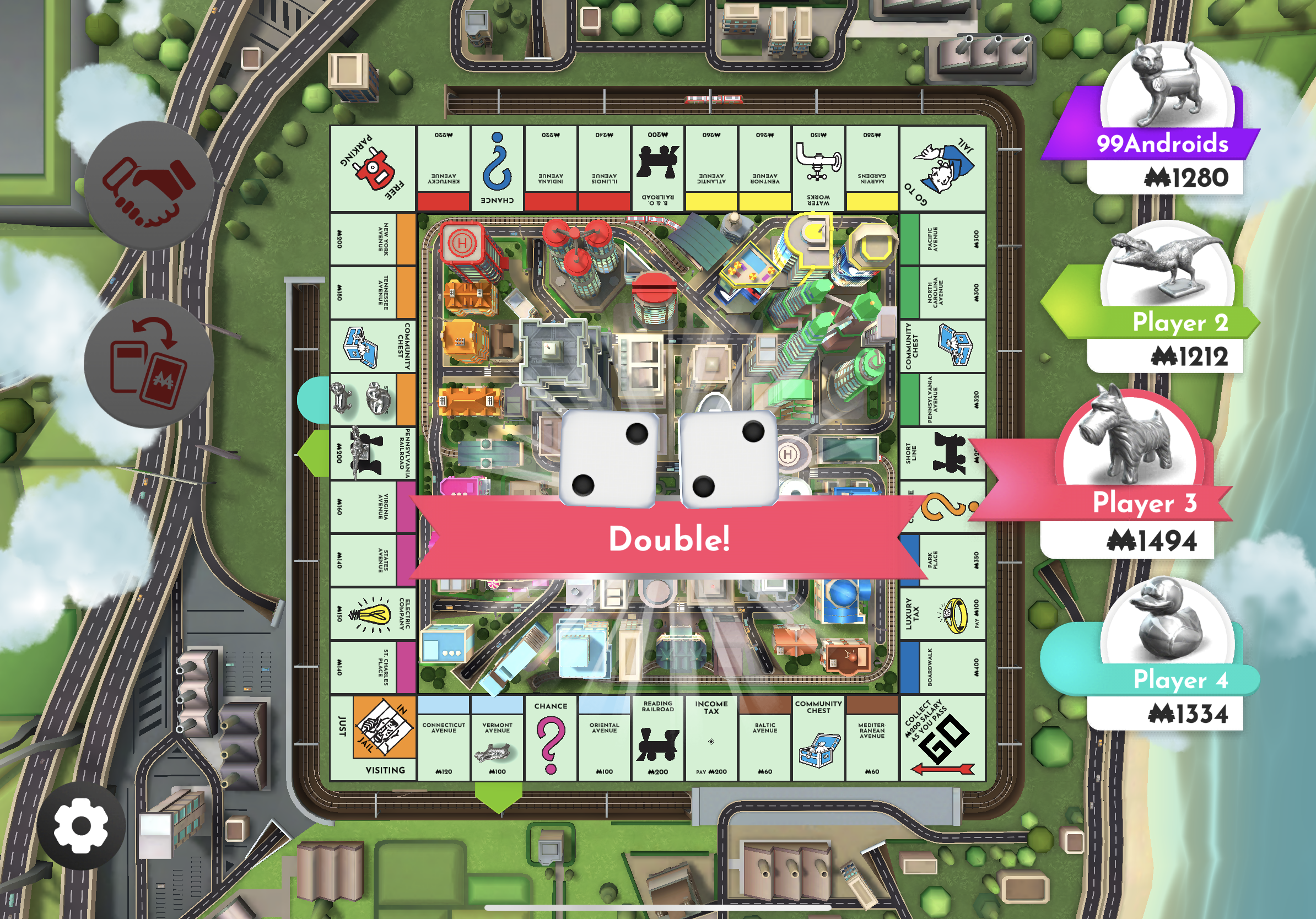 Get your fingers in as many pies as possible. You never know when a property will come in handy. If you have the third property in another player’s color set, prepare to extort them for everything they love for the monopoly only you can give them.

Do the Math: Make sure you can Snowball

There’s no point in acquiring a monopoly without the means to build on it. The later you are to the color-set party, the riskier your building process becomes. You need cash to build, and enough to potentially pay.

This is where the third house becomes important: if you have a color set with only a couple houses, even if someone lands it won’t be enough to cover your risk and keep building. Make sure  you have enough cash to charge the necessary rent to manage risk. 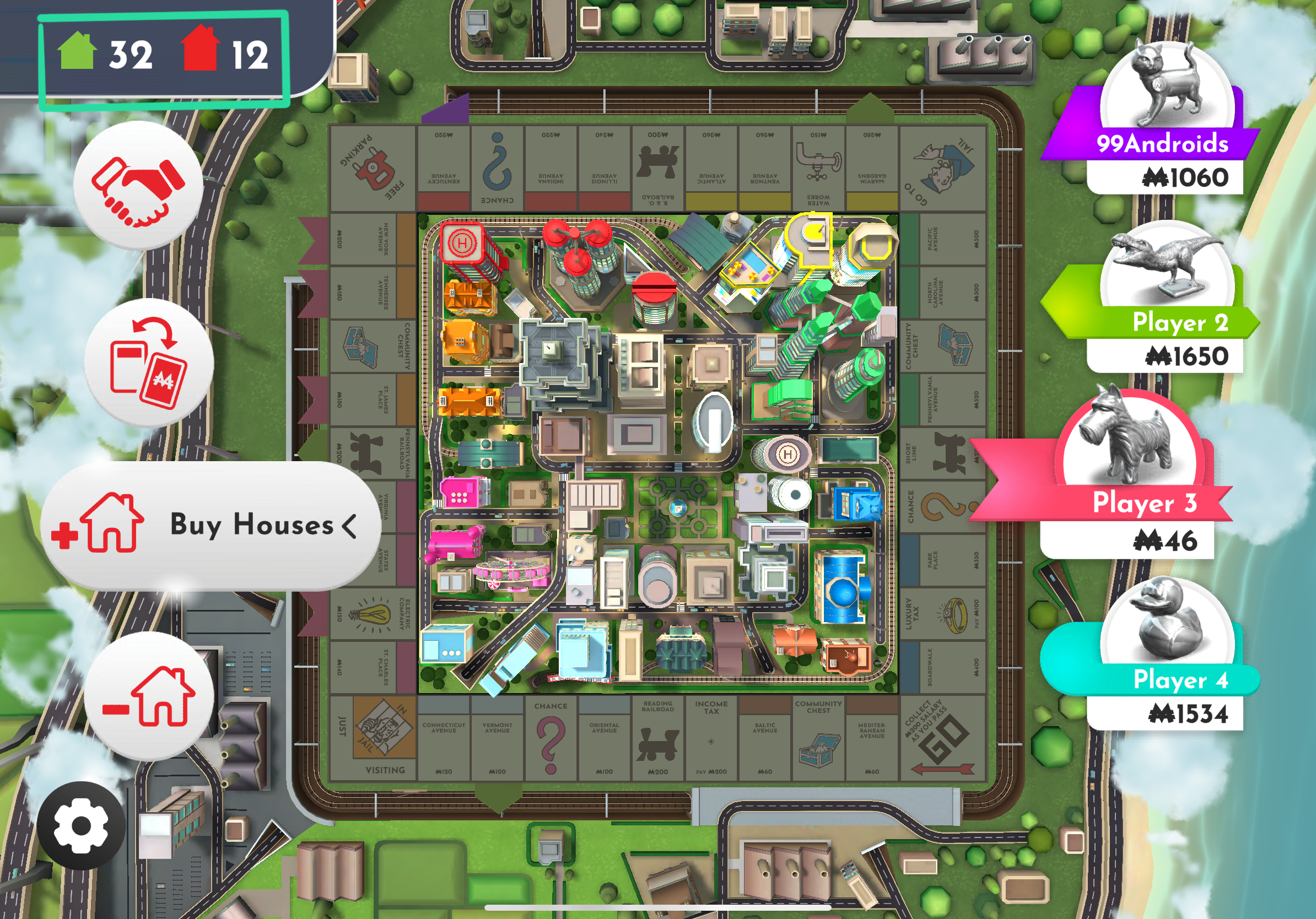 The most effective way to cement a victory is actually by not building hotels. There are 32 houses total, and the fact that a single three-property set can hold up to 12 houses means by mid to late game when a few players have monopolies, a devastating strategy becomes available: what we call House Choking. Keep tabs on the number of houses left.

If you have enough cash to buy them all, do it — No matter how much cash anyone else has, unless someone builds a hotel or has to sell houses, they can’t raise the rent on their color-set. And it will be infuriating. This tactic is mercilessly effective so be prepared: your family will hate you for it. 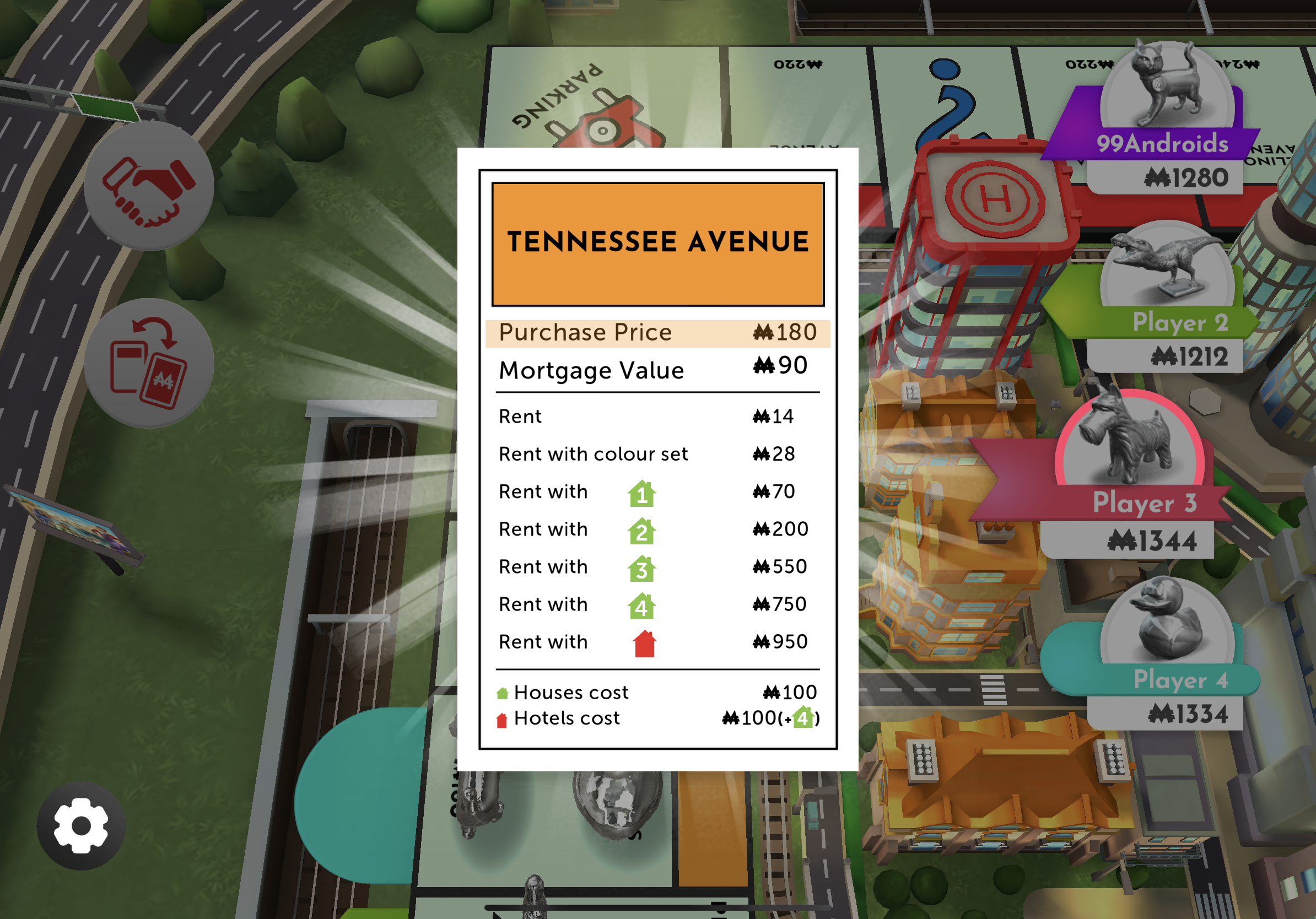 What is the best monopoly, you ask? Well, that depends on the game, the player, and the alignment of the planets. That said, we’ve compiled a list of the best monopolies, ranked according to their general effectiveness based on our experience over hundreds and hundreds of games. 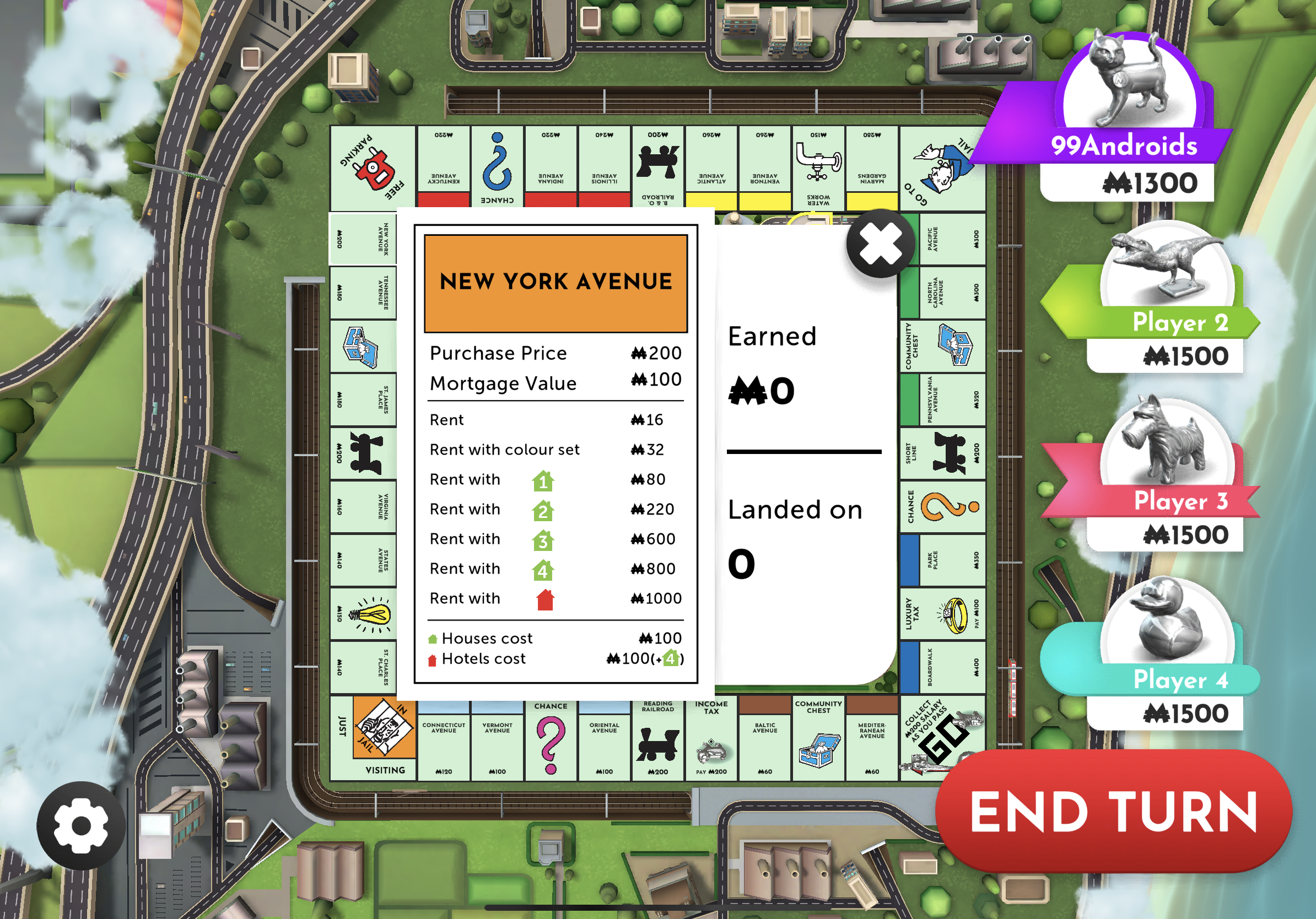 While it doesn’t have the crushing power that Yellow, Green, or Dark blue has, Orange is cheap to build and the rent is enough to send people to bankruptcy. But that’s not what makes Orange special.

People do a lot of jail time in monopoly — a lot — and your first roll out of jail has a high probability of landing you in Orange. People often skip brown, green, and both shades of blue due to jail — Pink to Yellow is a higher traffic area, and orange routinely gets the highest number of landers across a vast majority of games. 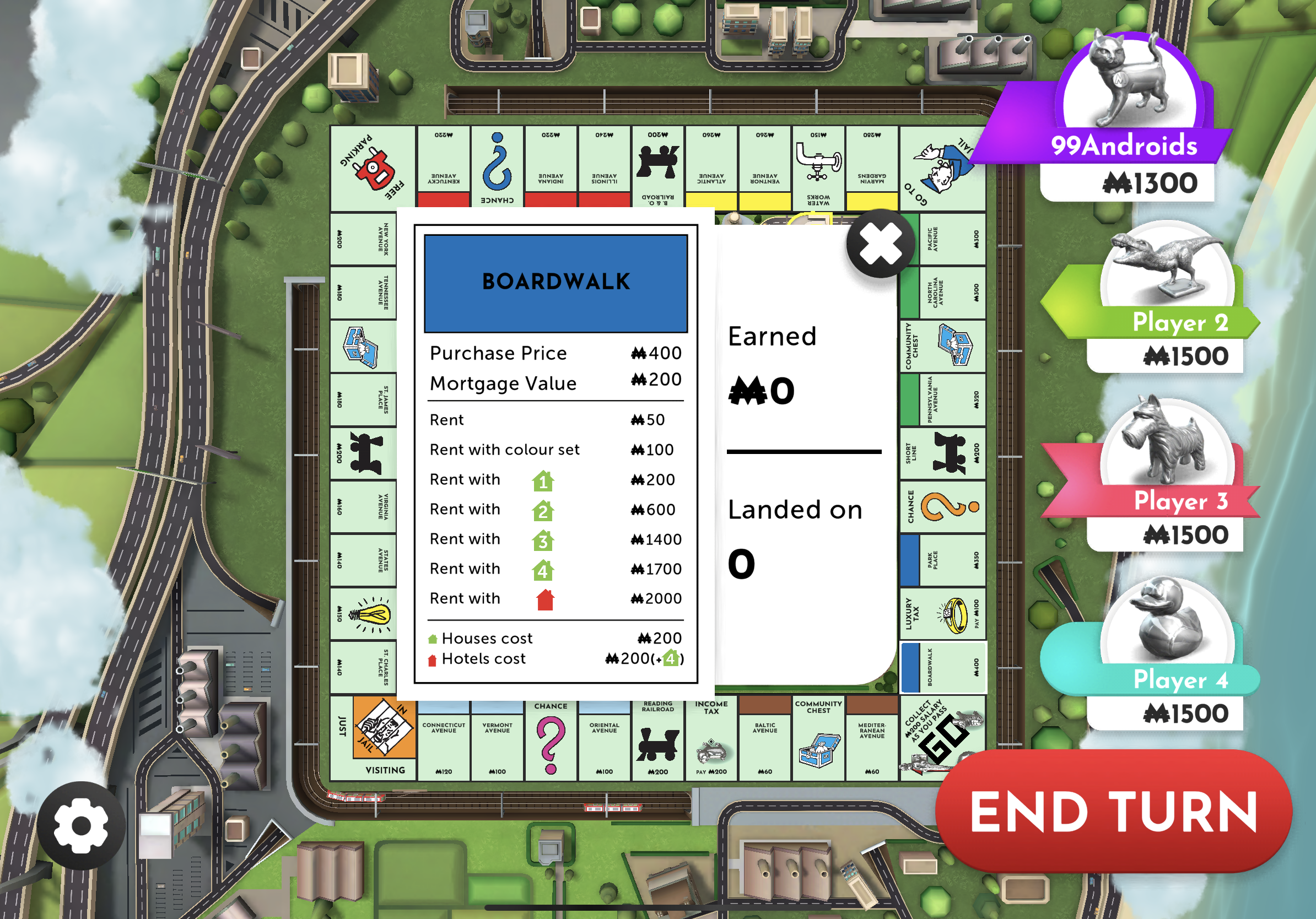 A hotel on Dark Blue is the herald of all-destruction. No one is immune; Thanos himself could land on a Dark Blue hotel and he too would be grimacing, pawning infinity stones like cheap little plastic houses, cursing quietly to himself. 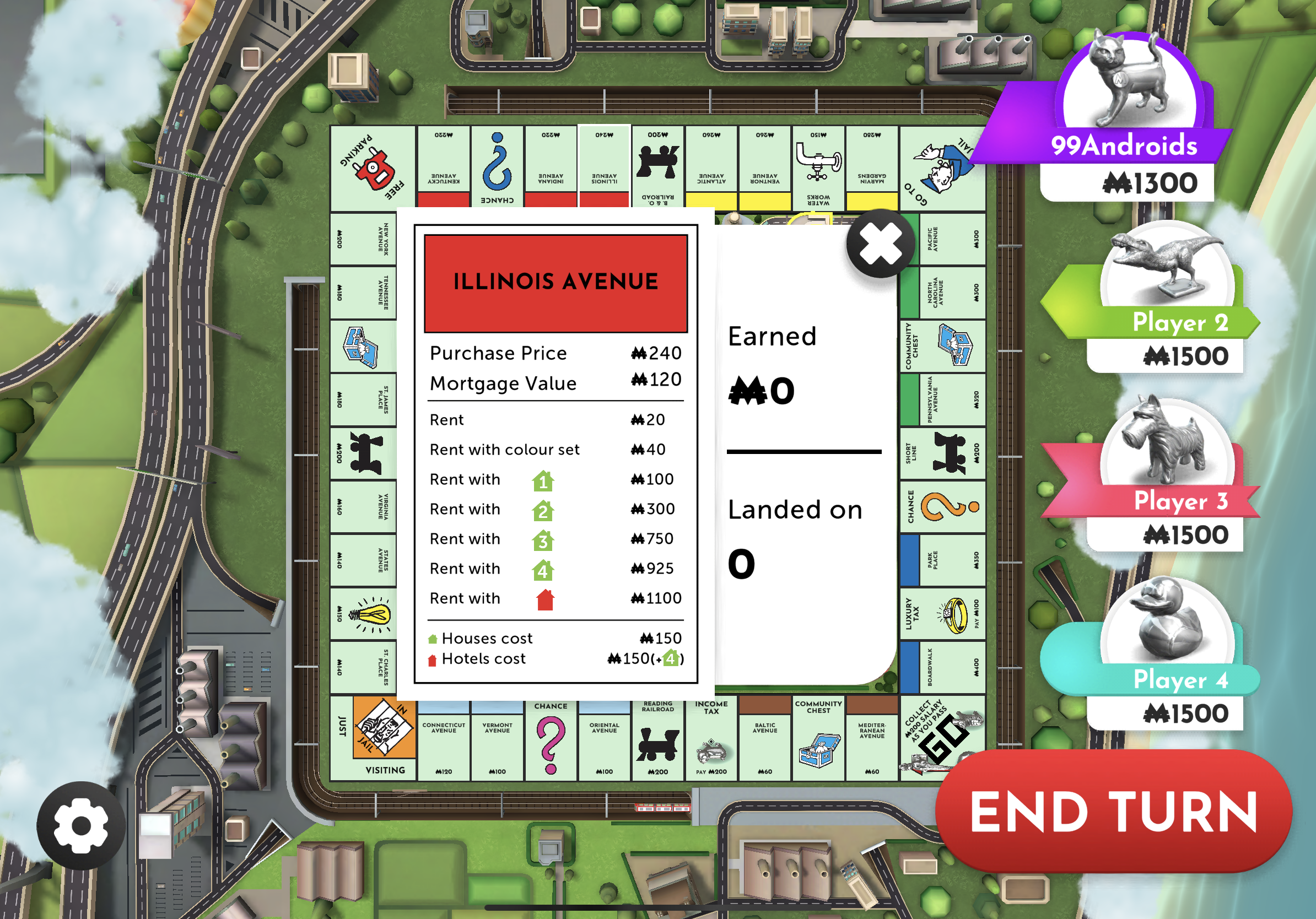 Red, though it has a slightly lower ROI than Yellow, has the advantage of holding one of three properties with an ‘Advance To’ card alongside considerably high rent. With max rent separated by a paltry $100 between Red and Yellow, Red is the obvious choice as the strongest ‘Advance To’ card after Dark Blue. 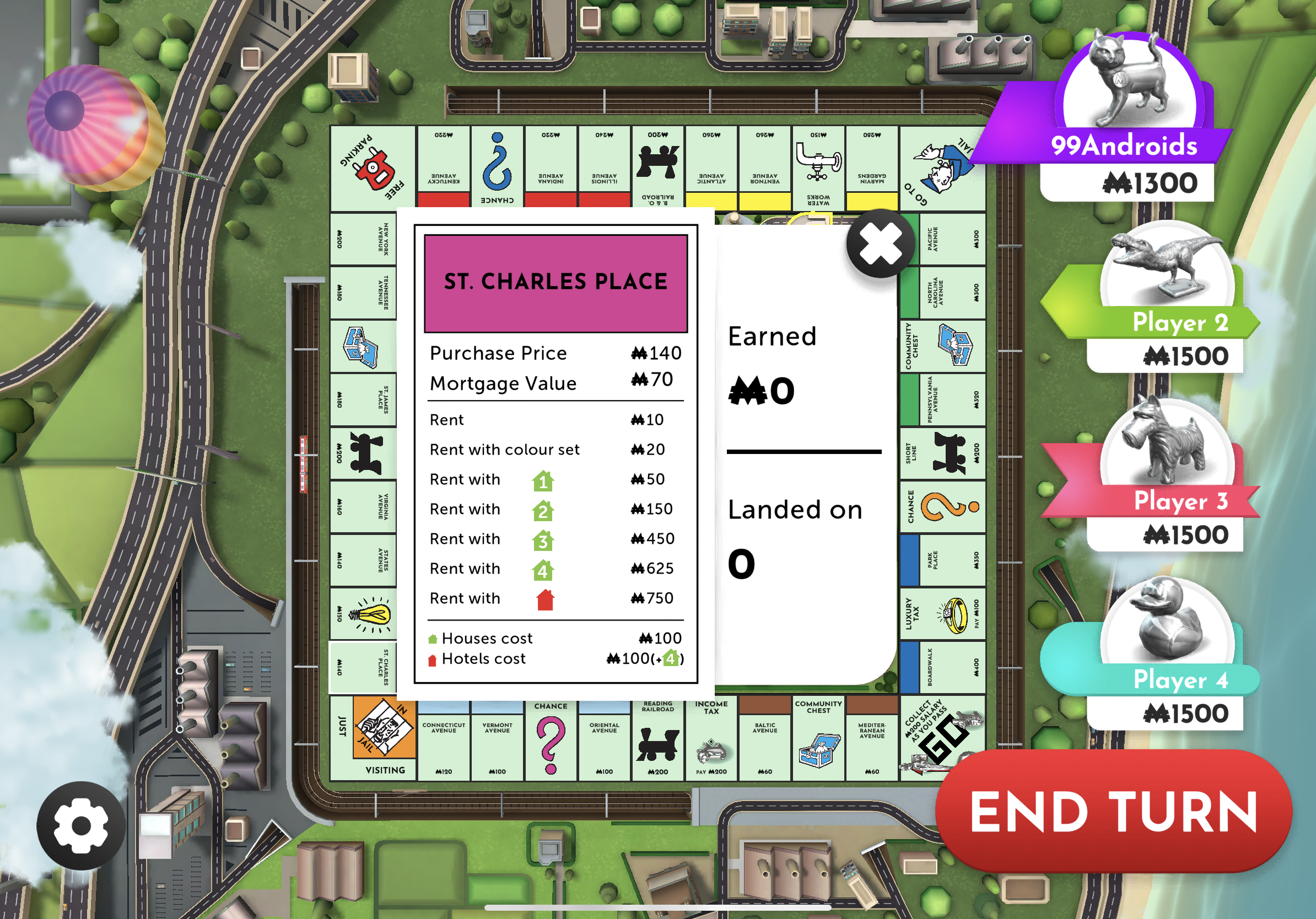 Pink, similar to Orange, is smack dab at the start of the higher-traffic side of the board. It lands here on the tier list for its cheapness to build alongside its status as another ‘Advance To’ property. While it doesn’t hit that hard, it has a decent frequency right outside the prison-gates (though not as high as orange). 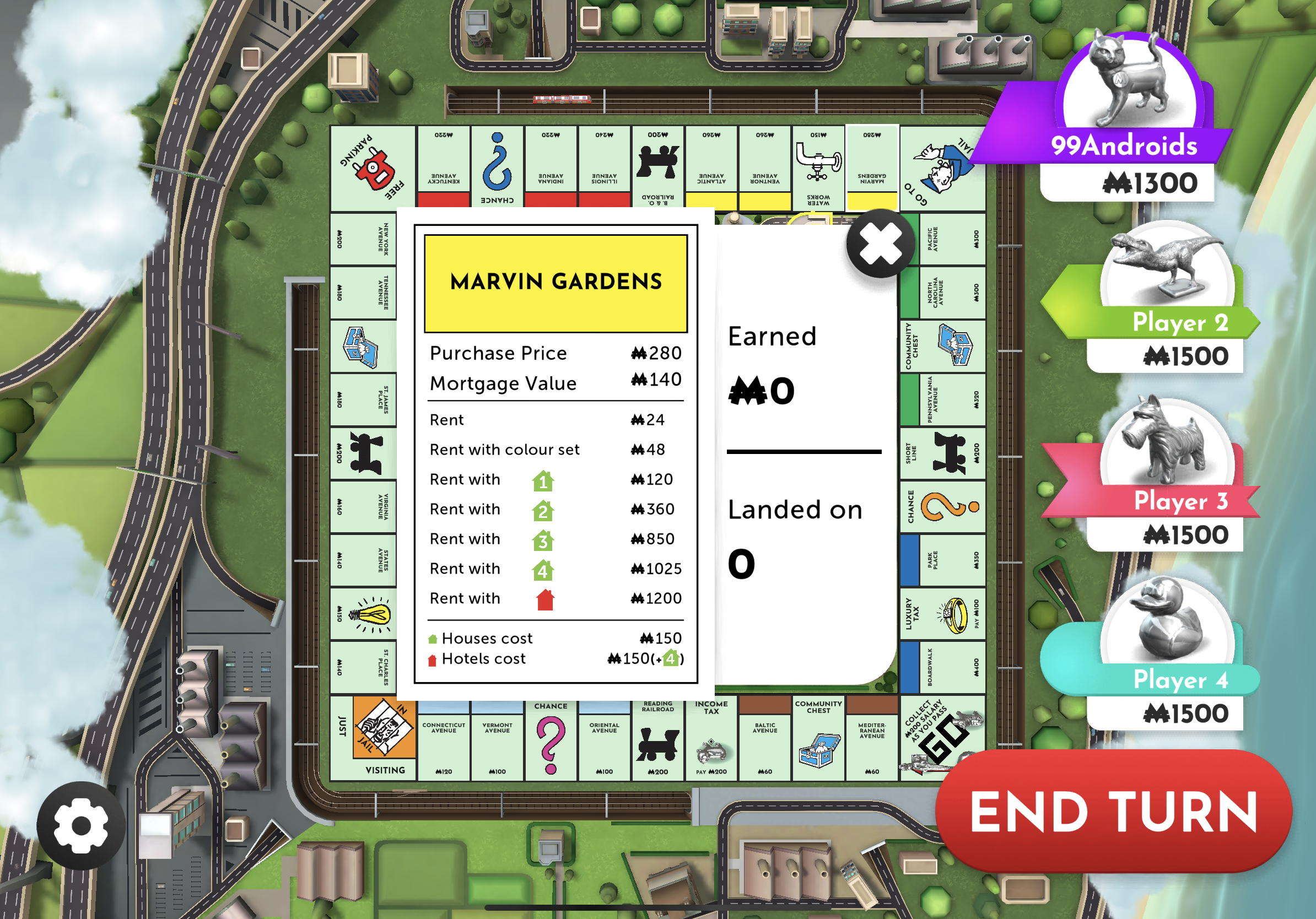 What can be said about Yellow? It’s the hardest hitting monopoly on the high traffic side of the board, and, though moderately expensive at $150 per house, can send players into oblivion with hotels. The reason it’s not higher on the list is that it costs $2250 to fully develop. 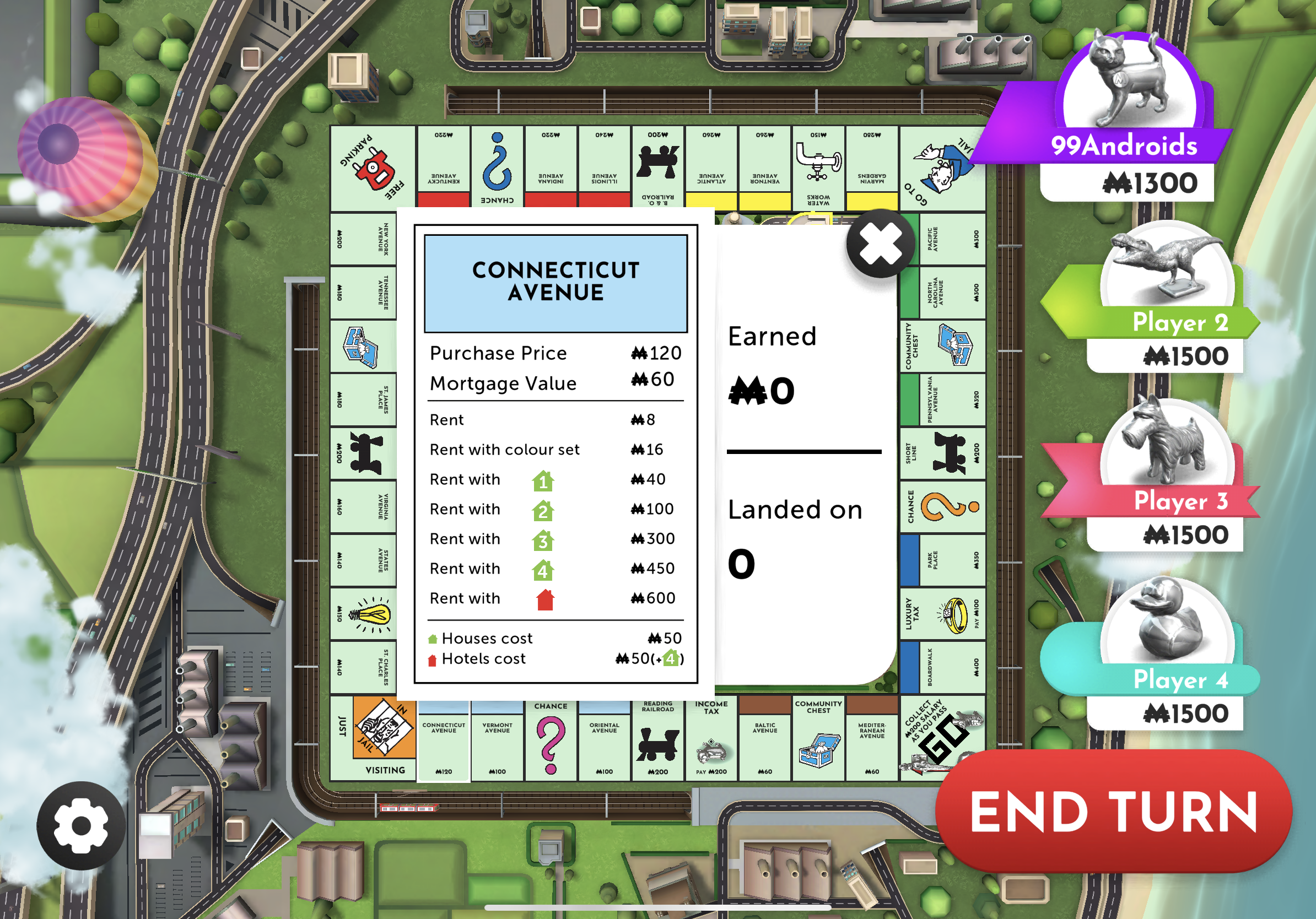 Light Blue is the weapon of choice for the keen-eyed slumlord. It doesn’t pack a thunderous punch like the flashier monopolies, but only costs $750 to build hotels and can earn you up to $600 — not something to scoff at considering how cheap it is.

Light blue is the one of the better second monopoly to have because it’s low investment and decent return can feed a stronger, more expensive monopoly. 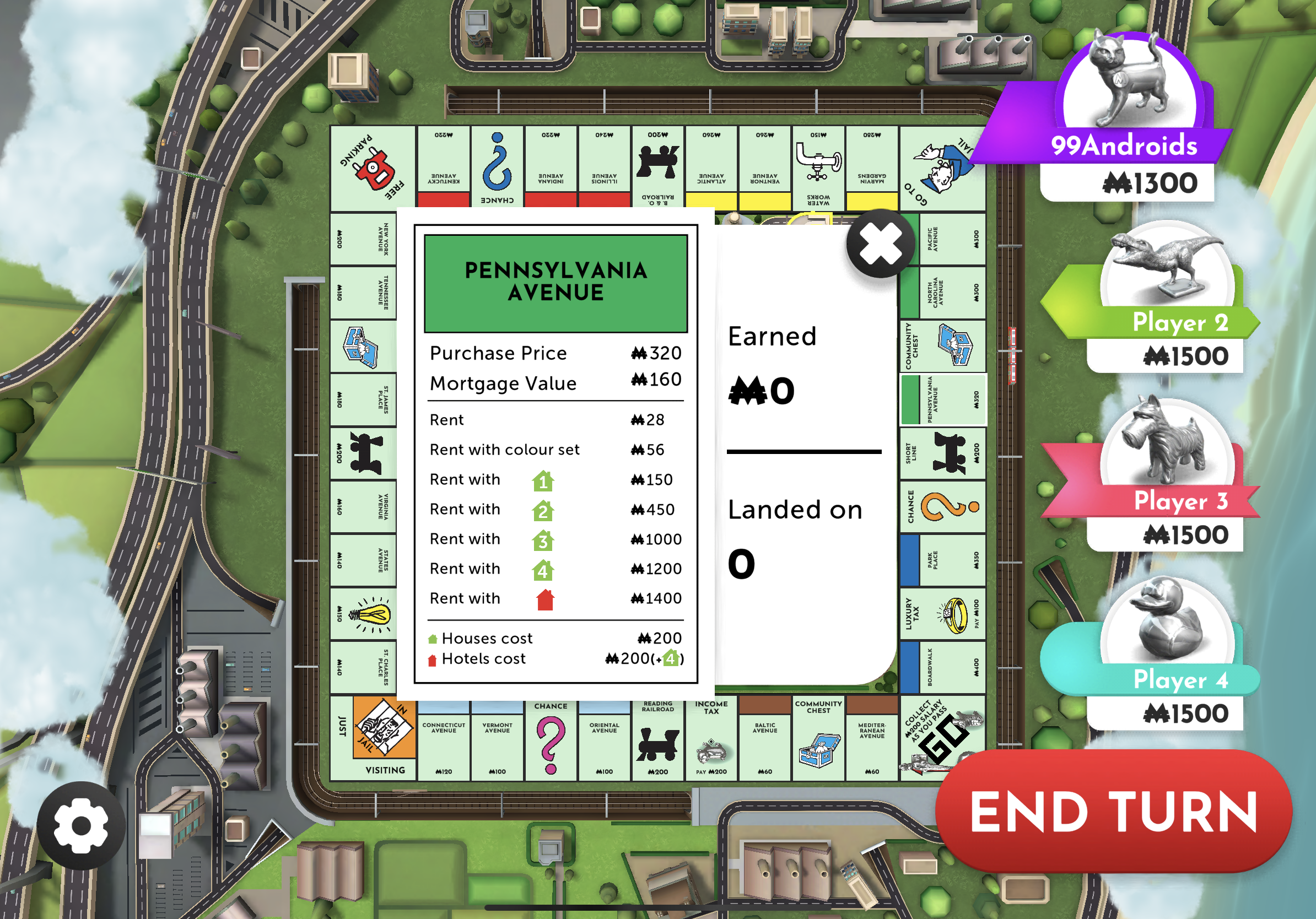 You may be surprised to find Green down here near the bottom, and that’s not for a lack of destructive capacity. Green Hotels can shred players almost as well as Dark blue — but the difference is just how expensive Green is. With the rules forcing you to build in sequential order, reaching Hotel stage costs a mind-boggling $3000 dollars. 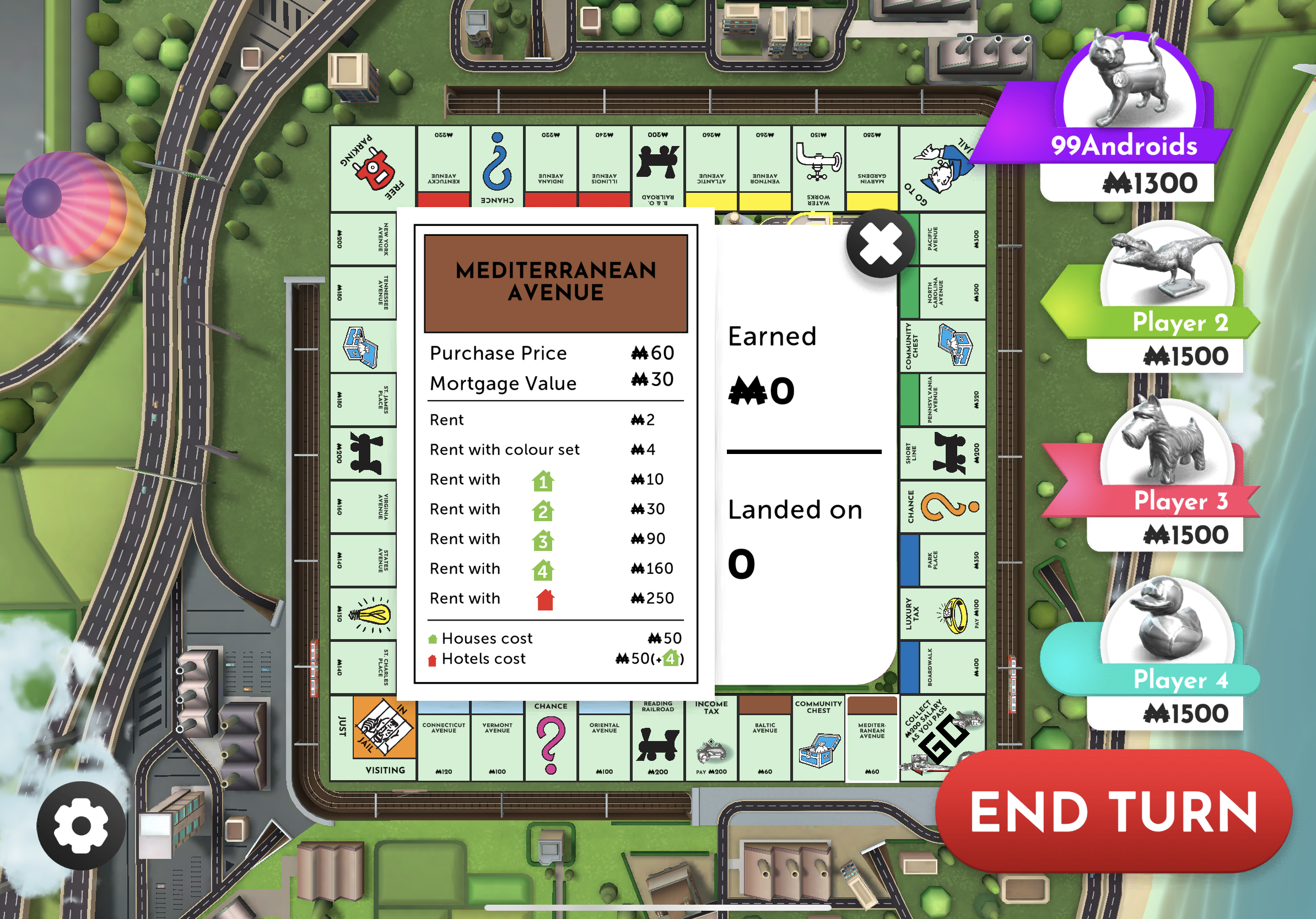 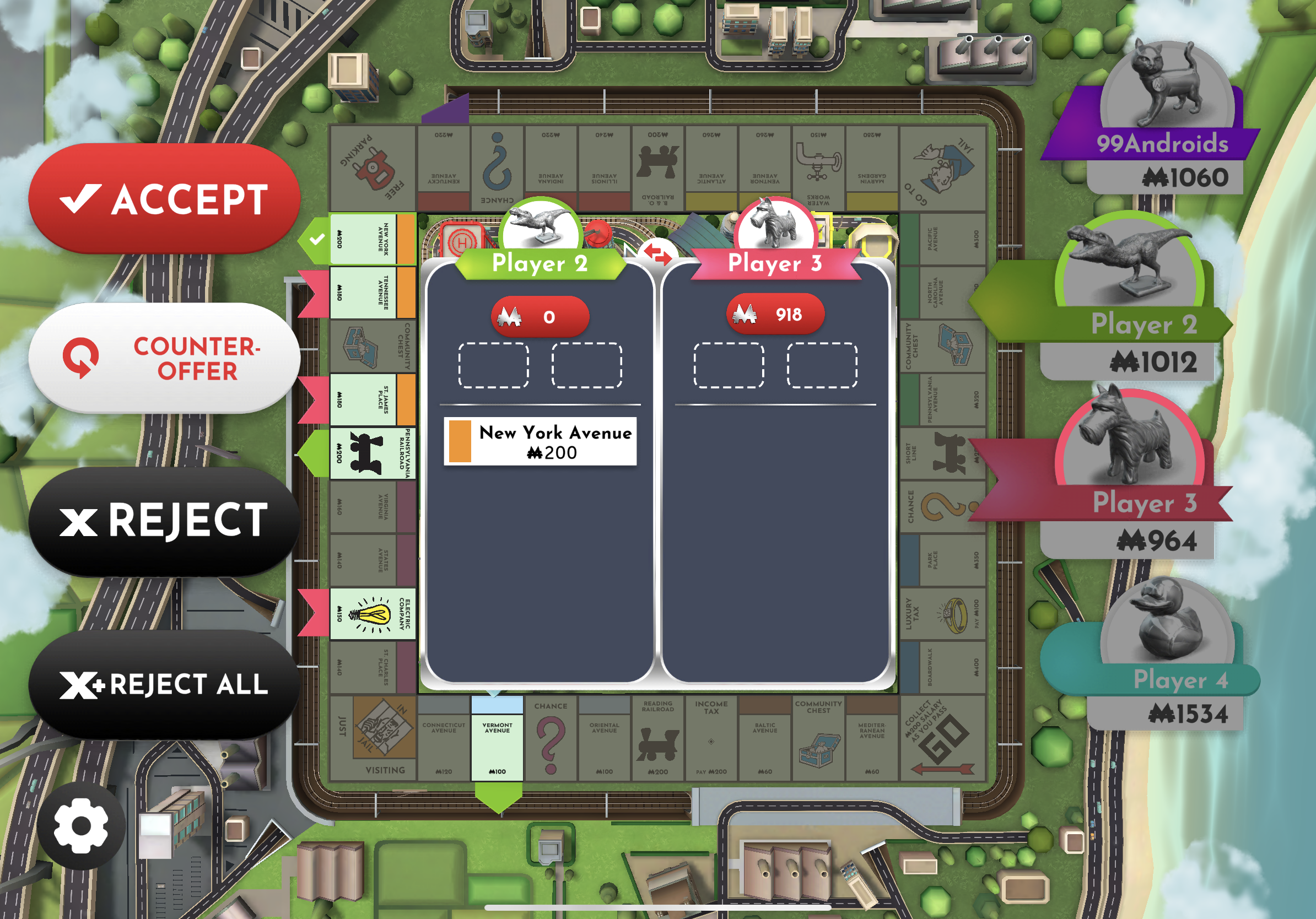 When giving monopolies away, take lots of cash

People hunger for monopolies. Use this to your advantage. Make them pay for the privilege — after doing the math. Calculate the number of houses they can build and always demand enough cash to prevent them from snowballing.

When considering building, examine the places of players on the board

If it looks like nobody’s landing on your color-set anytime soon, and you’re approaching enemy territory, save your cash and vice-versa. 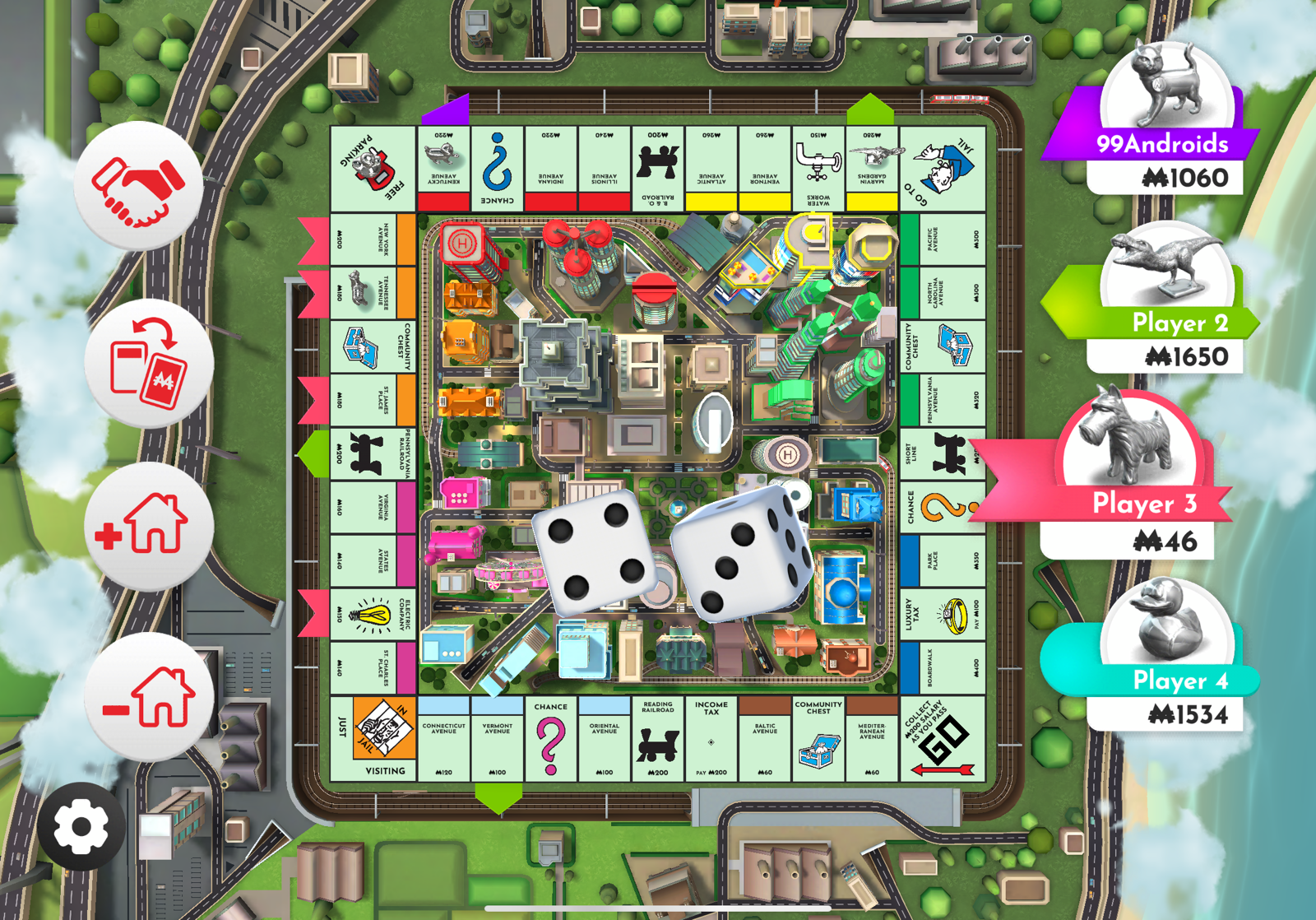 Never show how much you want something

More of a general negotiation principle, never open with an offer reflective of how much you want or need a property. Lowball and work from there.

Try to sneak in a natural monopoly

An early-game tactic for when people are still making their opening rolls, offer someone a more expensive property for their cheaper one — maybe a single yellow for a single light blue if you already have one of the latter and are approaching the color set again.

Less discerning players will suppress their grin at your seeming stupidity and quickly make the trade, giving you the opportunity to get a monopoly without paying a premium for it.

When making a trade, try to get the keys to someone else’s monopoly

When one color set is divided three ways, and Player A has the third in a color set you own two of, make a fair 1:1 trade with Player B to get two out of three properties and set up a deal with A for an exchange of monopolies. And remember, sometimes it’s better to take the cheaper monopoly so you can ask for cash.

When someone has less cash, give them the more expensive monopoly

When people are running real low on funds, consider offering them an expensive monopoly and asking for a cheaper one in exchange. Many will leap at the chance without first considering if they can afford to build. If they can’t, they’ll likely mortgage everything they have left to build a few houses — and the moment they land anywhere with decent rent, start selling houses like they’re going out of style. Green is excellent for this strategy.

Always make trades for monopolies on your turn

Giving away monopolies on someone else’s turn gives them the opportunity to build before your next roll. Always agree to make a deal on your turn so you can be the first to build.

Never give someone a fourth railroad 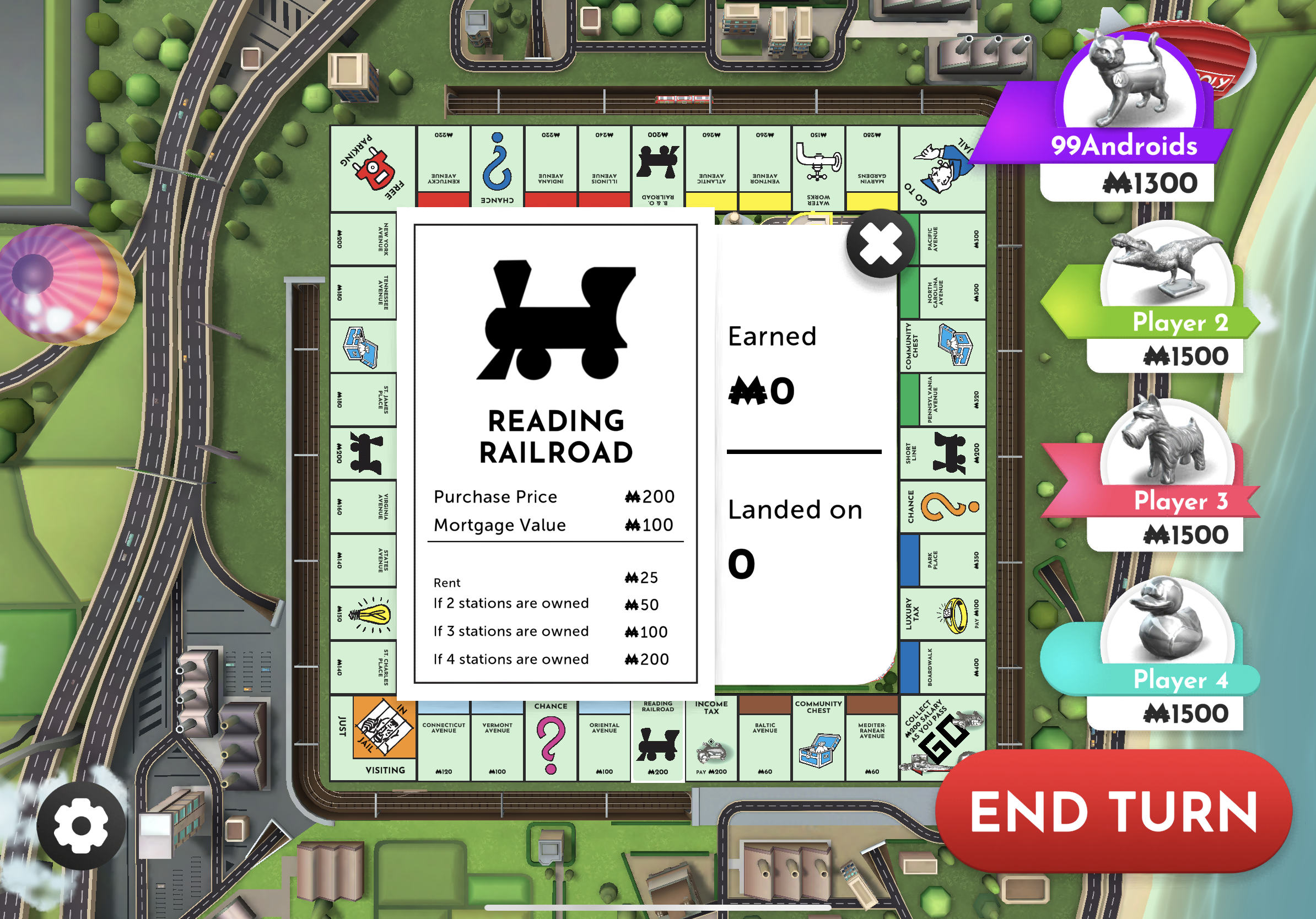 With all four rent becomes $200 a railroad, they’re everywhere on the board, and even have ‘Advance To’ cards that double their rent. Trust us; the moment you give someone that fourth railroad, you’re going to start landing on one every other turn because that’s simply how the universe works.

And there you have it. The Android Soul’s guide on how to send friends and family into utter destitution, gleefully robbing them of everything but the clothes on their back.

► Get the digital version of the game here.

Any ideas of your own on how best to extort piles of fake money from loved ones? Leave us a comment down below and we’ll consider it next time we’re playing Hasbro’s trademark home-wrecker.