Among Us, a game that for almost two years sat on a shelf in a quiet section of the Steam Store is now, thanks to a sudden cascade of love from streamers and YouTubers, the single most streamed game on Twitch (with double the viewership of League of Legends, and triple that of Fortnite and Modern Warfare) and third on the Steam charts right after CS:GO and Dota 2 with almost three hundred thousand players at any given moment.

Thus, you’ve probably heard about Among Us, and you’re considering giving it a shot to see what all the rage is about, or you haven’t and are in dire need of a crash course on the game. Either way, you have to know how to play Among us.

What Is Among Us?

Among Us is a social deduction game based on the 1980’s party hit, Werewolf (a.k.a Mafia) that has players trying to work out who the secret bad guys are among us (the Werewolves.) The crux of Werewolf is that the two werewolves, every night, pick a player and murder them and every morning the players debate who they think the werewolves are and progressively vote out players.

Among Us is the same. Almost. Four to ten players find themselves as the crew of a spaceship readying for launch, tasked with performing a series of actions around the ship in order to achieve take-off. Everything would be simple if it weren’t for the Imposter, an alien shapeshifter pretending to be just another member of the crew while doing their best to sabotage tasks and murder fellow crewmates on the sly.

Like Werewolf, the crew has to deduce who the Imposter is and vote them out. Unlike Werewolf, emergency votes can be called for at any time and victory can be achieved in a few ways: the Crew wins if they vote out the Imposter or achieve take-off, while the Imposter(s) wins if they kill all members of the crew whether through straightforward murder or by sabotaging critical objectives.

How to get Among Us

Among Us is available on Windows, iOS, and Android. Click the link below to get it on the platform of your choice.

Simply clicking the install button in the App/Play Store will download and install the game for you. While on Steam (Windows), you will need to download the Steam software first. Once you have the game installed, run it, and follow the instructions below to get started playing it with friends, online or local (offline).

How to Invite and Play with Friends in Among Us

Among Us has a massive playerbase, and it’s unlikely that you’re the only person in your network who has the game, so be sure to check with whatever few friends you have and round up an Among Us party. The game only gets better when its trusted friends and family backstabbing and lying to each other through their teeth.

How to Play Online Multiplayer in Among Us

To set up an online game, the first thing you need to do is click online. 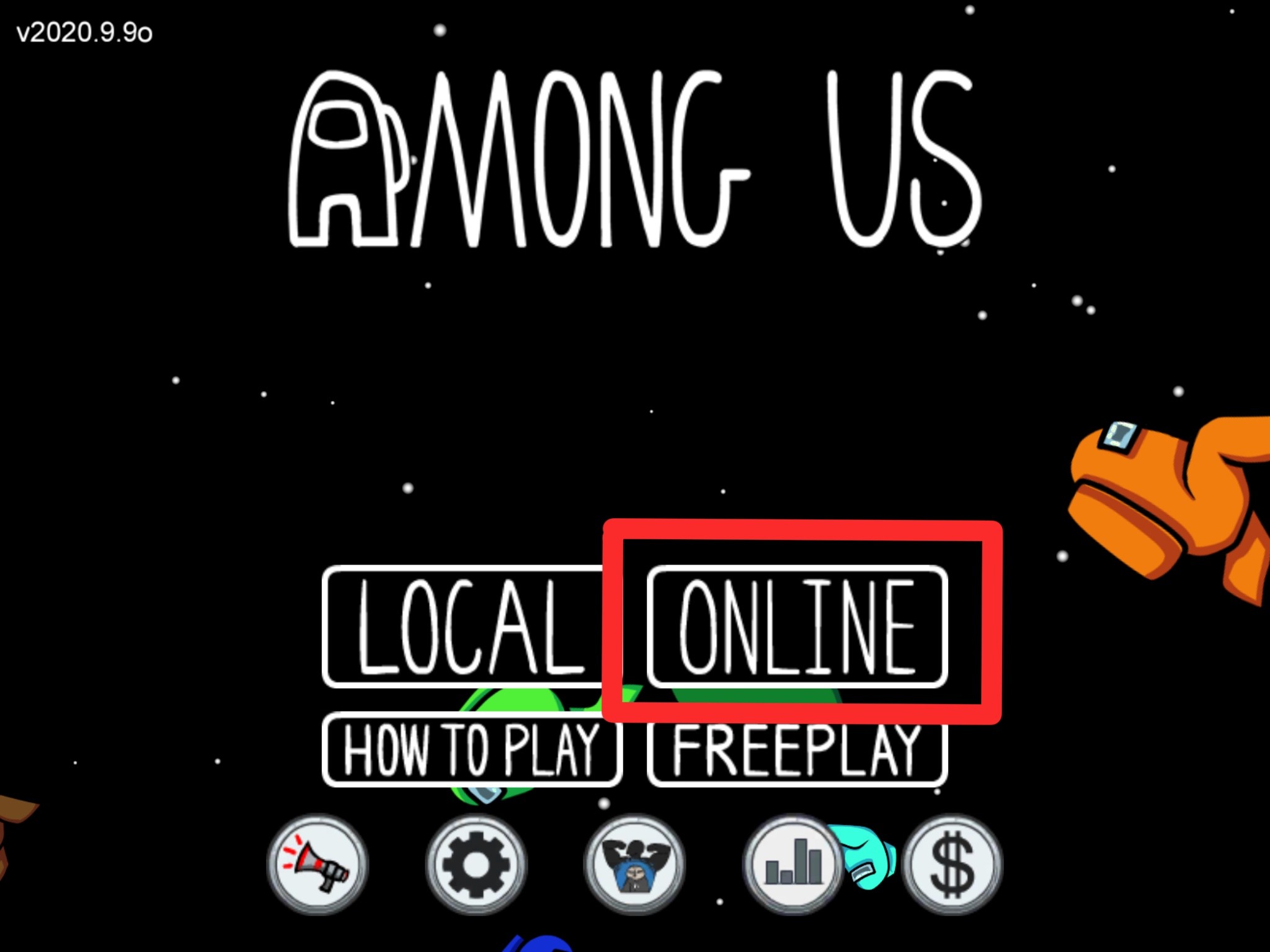 This will bring up three options: Host, Public, or Private. If you’re the one looking to create a match for you and your friends to end any last shred of trust between you, click on Host. 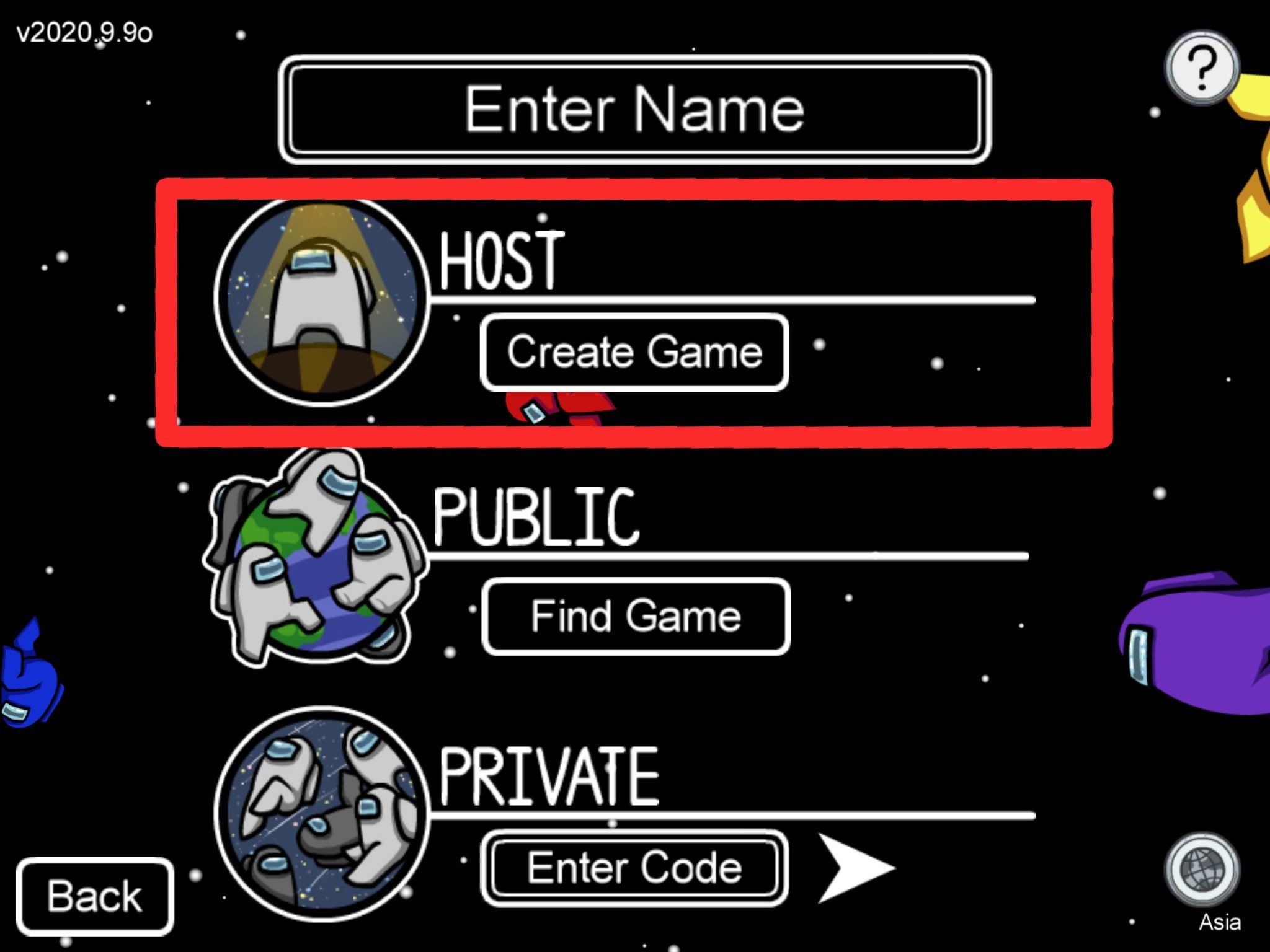 You’ll be given a list of settings from map choice to number of imposters, players and the room language. After adjusting these as desired, clicking ‘Confirm’ will open up with you suited up inside a private room. 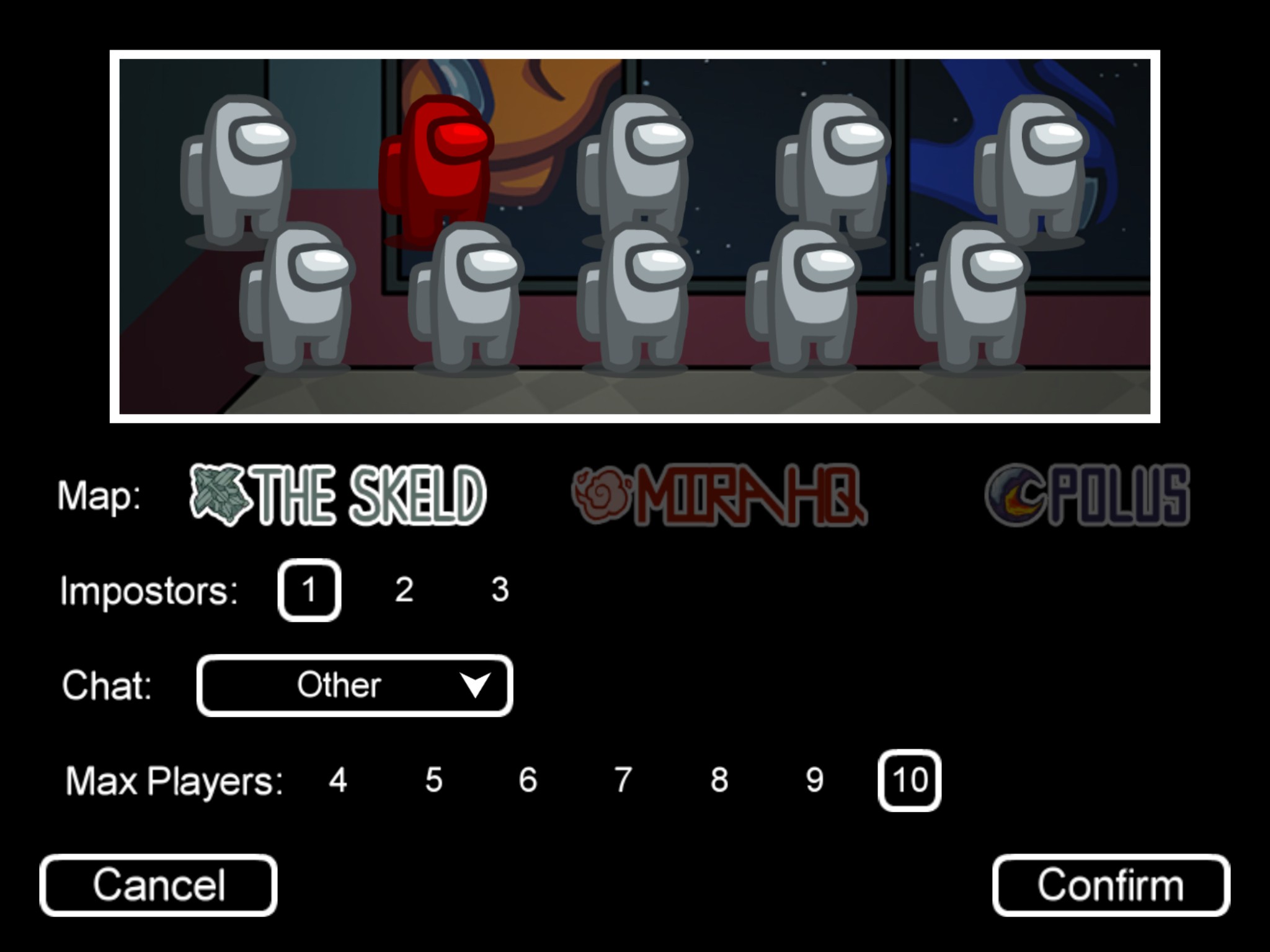 At the bottom of the screen will be a party code. Send this code to your friends, have them click on the ‘Private’ tab when selecting Online in Among Us, and instruct them to enter the code. 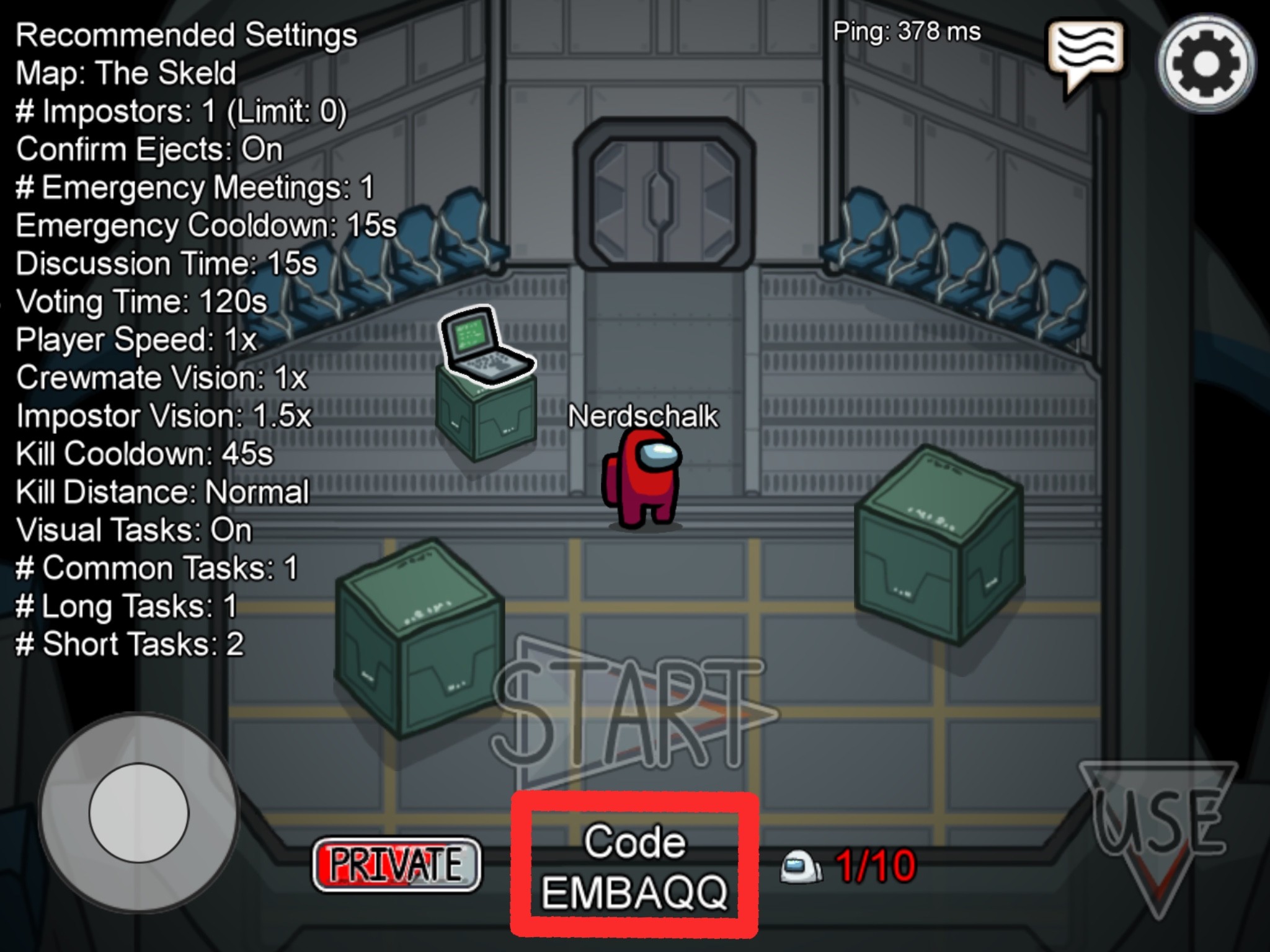 This will grant them access to the room. Once you have enough players, voilah! You can let the backstabbing, vent-traveling, argument-inducing fun begin!

How to Play Local Multiplayer in Among Us

The other option for annihilating relationships with friends and family in your immediate vicinity is, of course, Local multiplayer. 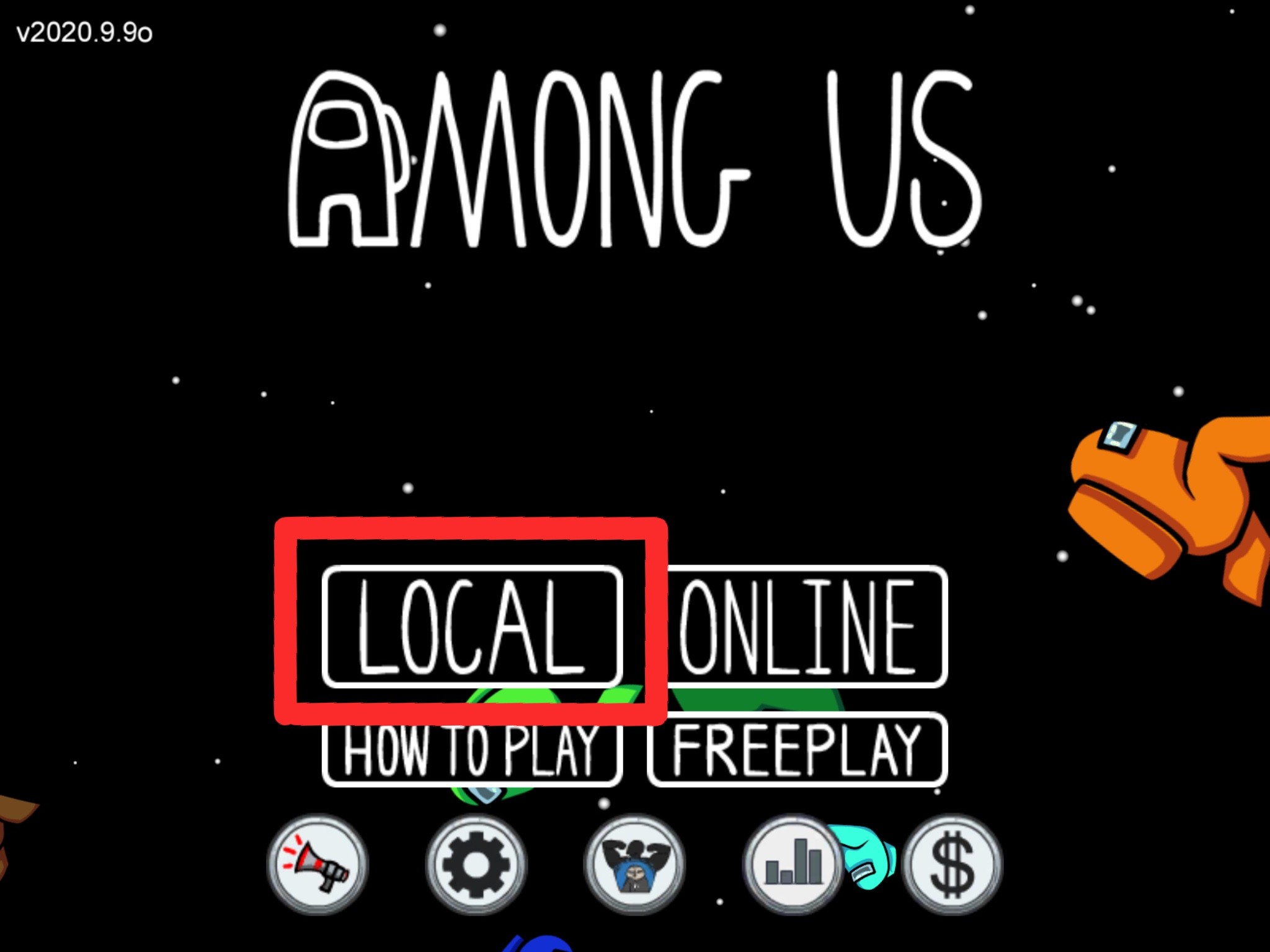 When opening up Among Us, selecting Local will bring up an option to either Host or select from a list of available games. 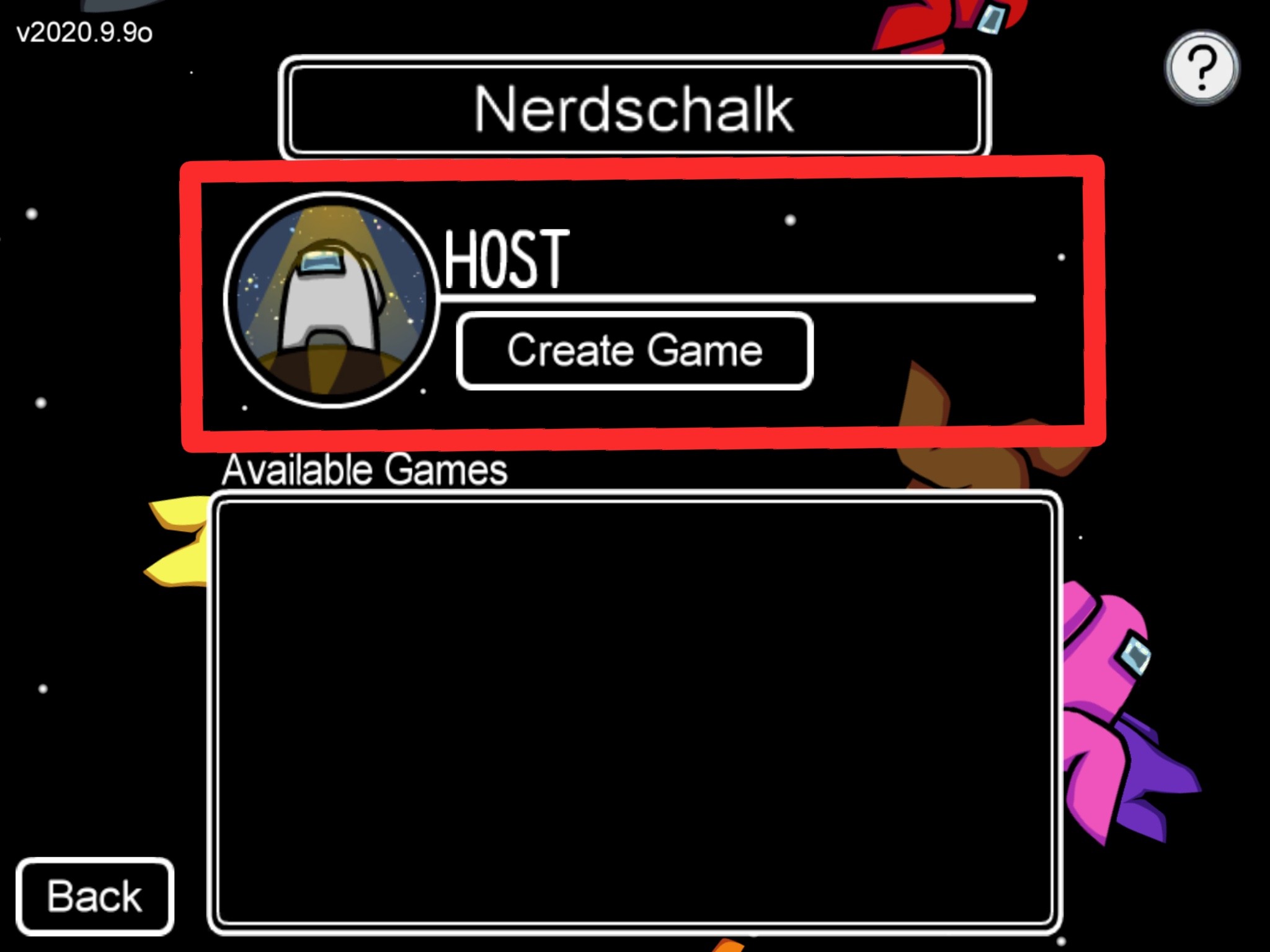 Clicking on Host opens you up into the private room where you can customize the settings while waiting for friends to join. 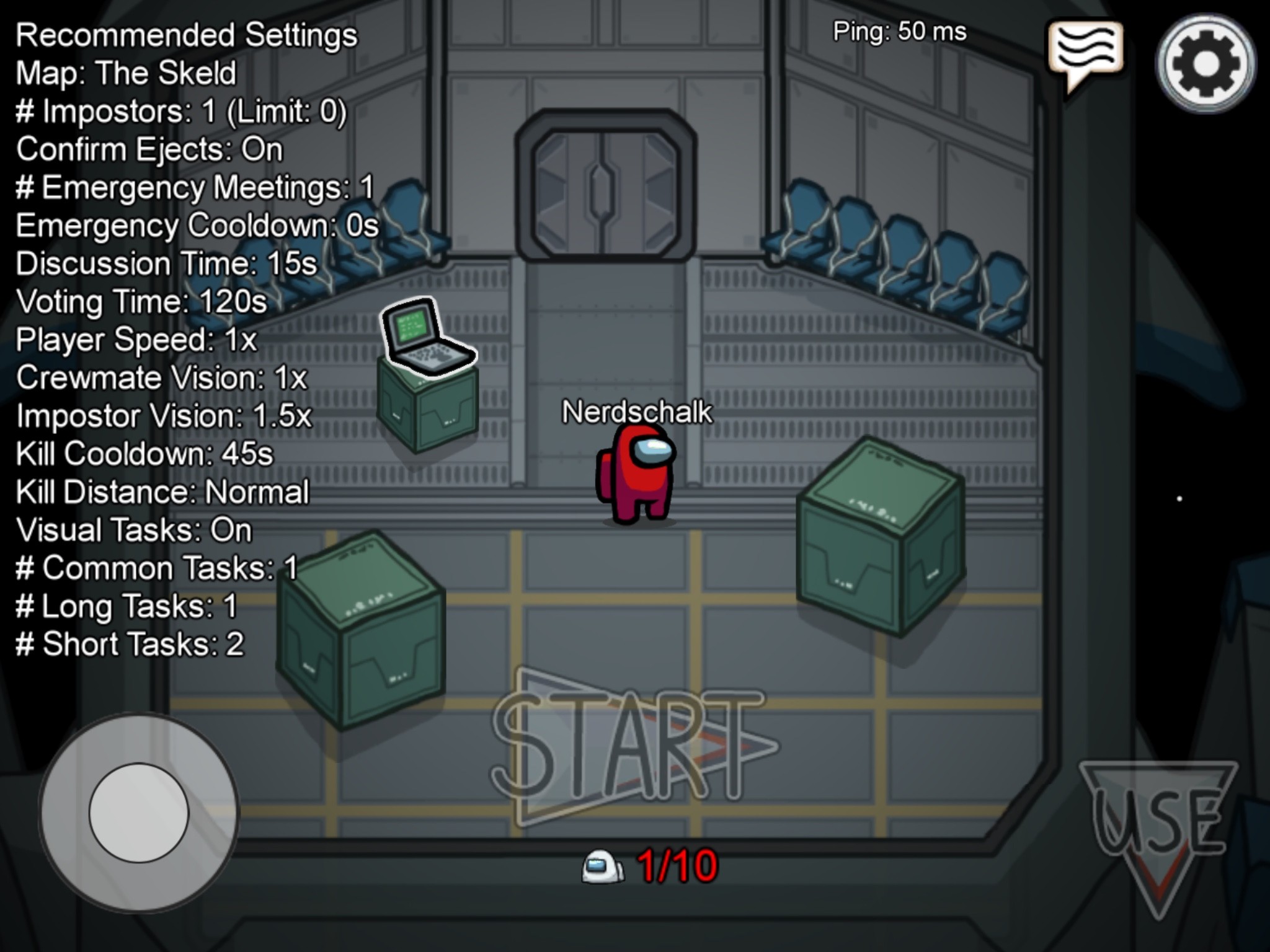 All your friends need to do is hop onto the same Wi-Fi network and your private room should be available in the list of available local games.

Your goal is to accomplish all of the tasks required for take-off while remaining mindful that one among you is the Imposter. Traveling together in groups can be beneficial when viable, for there is safety in numbers, but the nature of having multiple tasks that need doing in separate, sometimes isolated areas of the ship makes it necessary to split up. This is where crewmates are most vulnerable to the Imposter and when it becomes especially important to remain communicative and extra vigilant.

Crewmates (and the Imposter) have access to an Admin Map and Security Cameras that can be used to keep an eye on the rest of the crew. Keeping track of not only where your crewmates are but also where they were and when is a key skill learning how to play Among Us.

Imposters can sabotage objectives, so if you pass by a crewmate speeding out of an area that’s just been sabotaged, disappearing from a room with a vent in it, or a body is reported where someone was just moments ago, there’s a good chance they’re the imposter. Speaking of vents, be sure to make note of anybody who seems to travel around the map with inexplicable speed. This could mean they are making use of the Vent system, something only the Imposter can do.

TL;DR: Stay continuously aware of where other crewmates are. Communicate. Watch out for suspicious behavior. Be careful when alone.

Related: Among Us Crossplay Between Mobile and PC Explained!

Make use of the ship’s vents to remain elusive and hard to keep track of while you sabotage objectives and murder your supposed teammates, making sure to cultivate suspicion and paranoia through disinformation whenever a meeting is called. Giving false reports, making yourself appear informative with regular, genuine updates, pretending to be completing tasks, skillfully shifting blame onto other people —  a good Imposter mixes together truth and lies to blend in and misdirect crewmates without making it too obvious.

To stay alive the Imposter must be subtle, but they must also work fast. Killing crewmates the moment an opportunity presents itself so they don’t have time to alert your presence to other spacefarers is critical to your success as the Imposter.

When killing, be aware of the camera system. Cameras will blink red when in use, so before you let bloodlust consume you, check nearby cameras for any uninvited spectators.

TL;DR: Sabotage objectives to prevent take-off. Misdirect the crew with disinformation and the occasional false accusation. Be subtle. Kill fast.

Among Us Tips & Tricks

Take a page out of the Werewolf playbook. Remember to lie, muddle debates and spread disinformation without making it too obvious that’s your goal. If you can subtly nudge people in the wrong direction without pushing too hard, you can let the chaos unfold without bringing any critical eyes upon you early.

IMPOSTERS: Be careful with false accusations.

Going 0 to 100 in blaming your teammate is a weapon to be deployed sparingly. For starters, the person you’re trying to send to the gallows in your place might have an alibi or a witness to back them up. You might push too hard and come across as eager to shift the blame on someone. Or, alternatively, once the innocent bystander has been ejected and the bodies continue to pile up, suspicion will naturally fall on the one who led the charge.   Instead, try posing as just another crewmate doing their best to pinpoint the imposter; use questions more than accusations.

That means sitting at terminals for a few seconds to give the appearance of completing your own tasks. When moving about the ship, disguise it as heading towards an objective — this can coincide with backstabbing people actually at work on the terminal you’re heading to.

CREWMATES: Communicate as much as possible, but listen to others.

Whenever a meeting is called, be sure to provide as much information as possible to your crewmates. You never know what may be important, what might corroborate what others are saying. Do however be sure that what you’re saying is accurate, as the Imposter thrives on misinformation.

IMPOSTERS: Be quiet (but not too quiet).

It’s good not to stand out when you’re the Imposter, but if you remain too quiet when people are debating over the dead body just uncovered in the medical bay, it’s a pretty loud way to scream “I did it!”

We hope you enjoyed this small crash course on how to play Among Us. When it comes down to it, success in Among Us is more an art than a science. Keep these general principles in mind while playing on gut instinct; with experience will come success.

What is Among Us and WHY the hype?