Following the trade ban by the US administration, Huawei and its sub-brand Honor have been under immense heat. The biggest of those concerns is the inability to use Google Mobile Services (GMS). Without GMS, Huawei phones will lack Google’s useful apps include Maps, Photos, Drive, and more importantly Google Play.

With the loss of the Google Play Store, it has become difficult for new buyers of Huawei and Honor devices to get the apps that they may need, even though they can be sure of receiving the Android 11 update. This means, getting new apps on board will require a different process. Worry not! We’ve compiled a list of ways you could use to gain proper functionality on your Huawei/Honor device even if it is devoid of Google Play.

Before even releasing its own mobile services, Huawei had the AppGallery as a replacement for Google’s Play Store. The AppGallery app comes preinstalled with Huawei phones with thousands of apps with more to arrive in the near future as Huawei is working on adding a large number of Android apps to its AppGallery, by investing $1 billion to get 4,000 developers to fill the gap left by Google suite of apps.

As of now, Huawei’s AppGallery offers parental control restrictions with age-related content to filter, similar to that on the Play Store. There’s the Quick App feature that provides installation-free apps for saving battery and space. The company’s official page shows that content will change depending upon the location of the user, meaning European users will no longer be suggested apps that are popular in Asia. Additionally, if users own more one Huawei device, they can use the same Huawei ID for accessing the AppGallery on Huawei phones, tablets, smart screens, wearables, VR gadgets, and more.

If you cannot access Google Play on your Huawei/Honor device, it doesn’t mean you cannot install a third-party app store on your phone. We’ve already compiled a list of Google Play alternatives offering store-like experience, worthy sets of apps, safety and even, some paid apps if you’re enough. Some of the most useful replacement to the Play Store include:

Use web portal of the app

While apps can be easy to use on your phone, they can take up significant storage on your device. However, the web is quite an incredible platform because it can be accessed by a majority of devices and operating systems. Most apps like Facebook, Twitter, Instagram and more can be accessed in their mobile versions. Simply google search the name of the app and you can open its web version right from your browser. For best results, you can save quick bookmarks to the web apps you will often visit for quick navigation.

Web apps offer almost all the functionalities of native mobile apps and are as user-friendly as that of the latter. The service doesn’t take up storage but merely uses some memory through the cache on your web browser. Another positive thing is that you don’t need to update them like mobile apps because web apps are automatically updated.

No app repository is 100% safe and Google Play isn’t an exception. For those of you who are focused on security, F-Droid is an app store which only offers Fully Open Source Software (FOSS) with no tracking or hidden costs. In terms of privacy, F-Droid employs several precautions like sending all data through HTTPS, Tor support, converting supported languages in the metadata so as to not reveal your location, and avoiding leakage of browsing data.

Here are a few great apps that you could download from F-Droid: 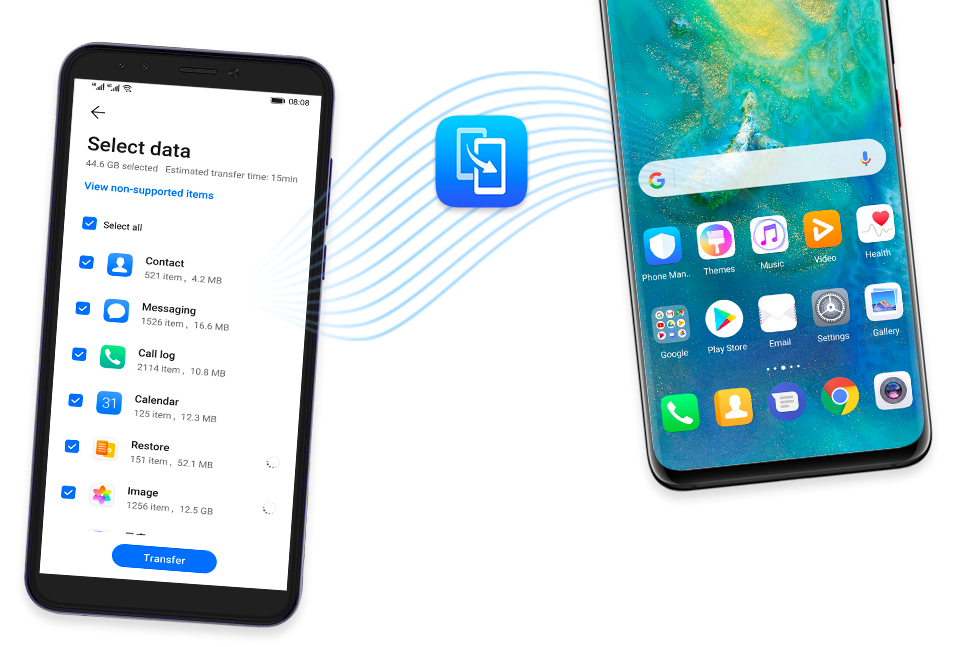 Huawei offers its Phone Clone app that provides users a way to transfer contacts, SMS, call logs, notes, recordings, calendars, photos, music, videos, documents, and apps from an old phone to a new one. The app even supports backing up of application data, schedule, memo, alarm, and bookmarks and all of this is done through secured wireless network encryption. No data is backed up in the cloud when transferring files between phones.

Without Google Play, you do not only miss out on apps but also app updates, which the Play Store is known for. You need regular updates to the apps that you use to get new features, fix bugs, and also prevent any malware incident. If you do not have Google Play on your device, the next best thing to do is to install APKUpdater which is a tool designed specifically to find updates for your installed apps.

APKUpdater gets the latest version of apps from not one but multiple sources including APK Mirror, APKPure, and Aptoide. The app has a material design with multiple theme support and displays notifications when updates are found. There’s an Ignore list for apps that you don’t want to update.

Do you own a new Huawei or Honor smartphone? Which apps do you use to manage without Google services? Let us know in the comments below.

Best apps to blur background of an image on Android

How to sync your room’s lighting with music