It’s not only very helpful but also very cool to have a setup, that would automatically sync files and folders on your Android device to Desktop PC (Mac and Windows), and vice versa.

Well, all you need for such a setup is: a WiFi network, and free android app and Desktop software (available both for Mac Windows PC). Yes, it’s completely free solution, and an easy one to setup and use, too.

And this is all thanks to Cheetah Android app, that provides you wireless sync, which is still not that common in sync apps.

Now, let’s see how you could sync files and folders between Desktop (Windows PC and Mac) and your Android phone and tablet.

Use the link below to download the PC client of the Cheetah Android app on the OD you got: Mac, or Windows.

Visit the download link above download the installer .msi file if you got Windows PC, and installer .mpg file if Mac OS X is your choice of OS.

Double the installation file to you downloaded in step 2 above, and install the Cheetah client on your Mac or Windows PC.

Let it run in background. It needs to be always running in background to be able to communicate with Android software to complete manual/scheduled syncs that you may set. 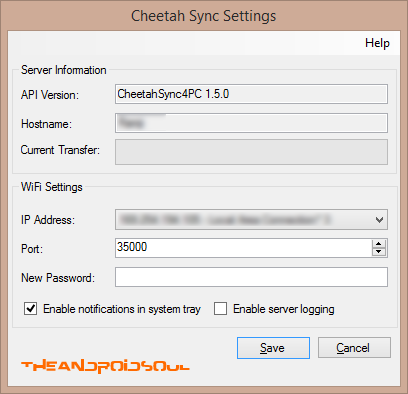 If you put xyz.mp4 file into this folder and then run the sync job, or if it’s run automatically at a given time, then this xyz.mp4 file will be copied to Android device on sync.

And that’s it about the work we got to do on PC, for now at least.

Download the Cheetah free Android app on your Android device from the Google Play Store (link).

Create a new folder on your Android device using any file explorer/manager app — use ES File Explorer, in nothing else.

We will be syncing this folder with the PC’s folder we created in step 3 above, named, PC Sync Folder.

Everything you put inside the Android PC folder will be copied to PC Sync folder, and vice versa, depending on whether you choose one way sync (either of Android to PC only or PC to Android only) or two way sync (PC to and from Android device) under the SYNC JOB settings, which btw is the next thing to do.

6. MAKE SURE YOU HAVE CONNECTED TO SAME WIRELESS NETWORK (Wi-Fi) FROM BOTH DEVICES

You must have a working Wi-Fi network around you, and must have connected to it both from your PC and your Android phone/tablet.

If the connection breaks with either PC or your Android device, the sync would not happen, as active connection at both devices is a must have.

Here’s the screenshot shot form my PC and my Android phone. 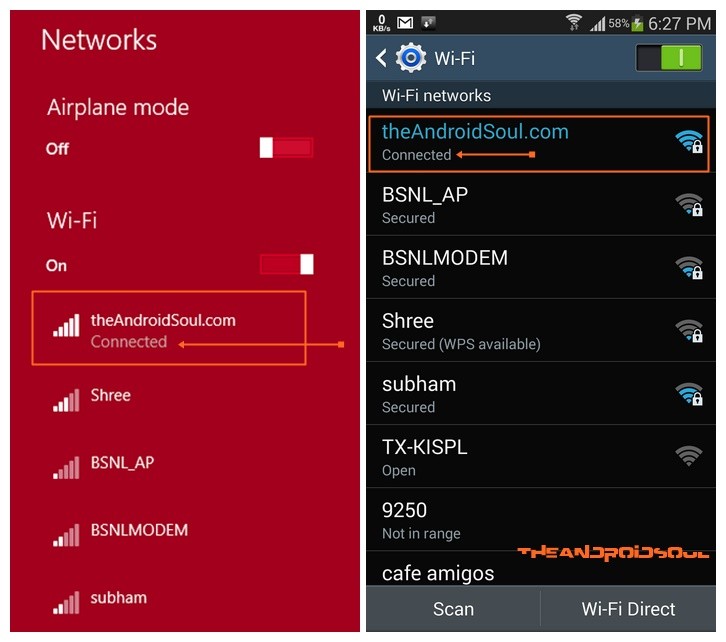 Your files and folders are synced as specified in the Sync Job, with settings defined. 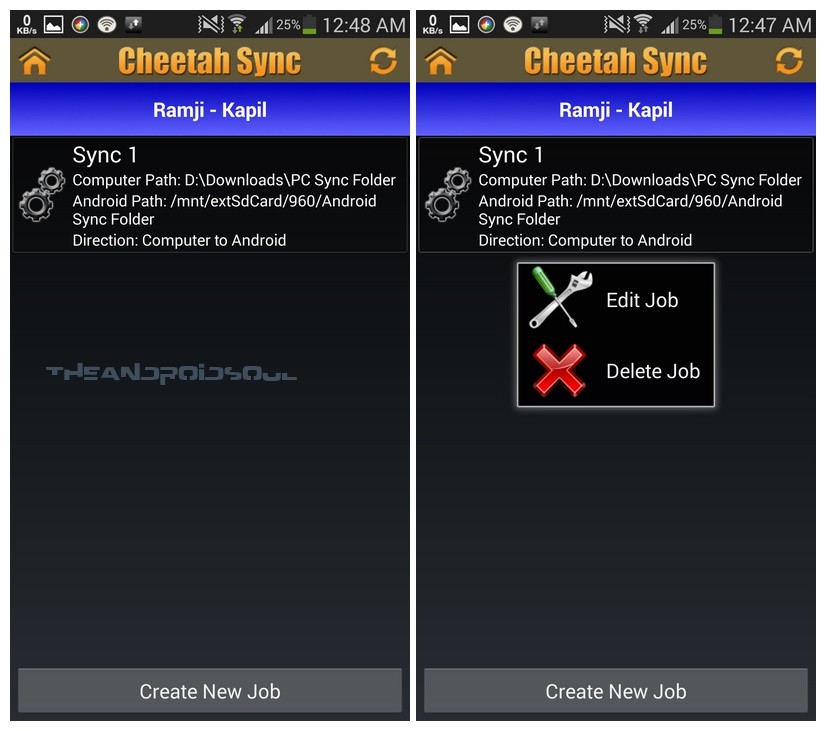 Go back to main screen of the app, also called Dashboard, and tap on Settings icon.

Tap on Synchronization Interval and select one from the available options: Manually, every hour, 4 hours, 8 hours and Daily.

The option, Synchronization Time, isn’t available under free version of the app. It lets you specify a particular time for daily sync.

You can also set up the default settings under the heading DEFAULT SYNC OPTIONS, so that these settings are applied by default when you create a new Sync Job. This includes the options in points 8, 9 and 10 in the Step 7 guide above.

The Cheetah sync automatically sync the stuff to/from Android from/to PC as you set in settings, automatically (if you set it so, or you can do it manually by tapping on the Sync button on the app’s Dashboard, and then tapping on Sync, with Sync Jobs selected.

ESTABLISHING CONNECTION BETWEEN CHEETAH ANDROID APP AND THE PC SOFTWARE

If you are finding trouble in connecting both Cheetah clients, and are stuck, look at the Firewall Guide linked below.

By the way, my experience was both very good and very bad in connecting the Cheetah Android app with its PC software.

I am to blame too, because I tried connecting with two windows PCs on two different Wi-Fi networks, which I think were causing the complications. Mainly because, the app connected all fine in first attempt all by itself without me needing to try manually, or go into firewall settings.

At first attempt, it connected all good. Then I changed the PC and it was unable to connect. I tried manually too, but no help. Changing settings in Windows Firewall using the guide linked above, thus allowing Cheetah PC software in Windows, didn’t work either.

So, I removed Cheetah data, to make it a fresh install, and then tried manually again — by entering the IP address for WiFi which one gets from the dropdown under the WiFI settings section of Cheetah PC software. It worked (in less than 2 seconds)!

Then I changed the WiFi network and now, whatever I do, it isn’t setting up.

If the above was not clear, then as per my experience, to connect the Cheetah app and PC software, try this:

Share the issues you are experiencing in connecting the Cheetah app and PC software, or in using the app, with us, in the comments below.

We’ll try to help you out!

Your feedback, and suggestions and corrections, to this article are welcomed!

Back to Stock: Downgrade Samsung Galaxy S2 Plus GT-I9105 to Android 4.2.2 Jelly Bean with Official Firmware