Although we haven’t heard anything official about the Moto E4 from Motorola yet, but the device is definitely releasing soon worldwide as we spotted it several times on the FCC website in the past couple of weeks. Earlier yesterday, we even spotted an alleged Moto E4 variant over at the Indonesian certification agency with extreme budget level specs, and now another Motorola device with model XT1770 has joined the party.

Spotted over at FCC, the Motorola XT1770 device carries a massive 5000mAh battery. However, the battery charger included in FCC filing is only 2.0A, which probably tells us that it won’t be a device that would support fast charging. And the only device that would fit in this scenario of specifications would be a budget device like the Moto E4 Power. 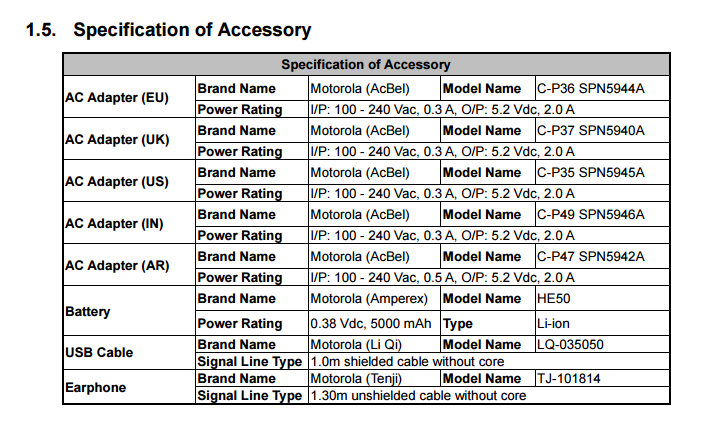 Moto E4 Power, as the name suggests, is expected to pack a massive battery with enough power to get by for a couple of days over normal usage. And the 5000mAh battery fits the bill quite perfectly. However, we earlier spotted another Motorola device by model number XT1723, and we believed it be the Moto E4 Power as it carried a powerful battery (about 4000mAh) as well.

Either way, as both the device variants have been certified by FCC, we should be seeing the Moto E4 or E4 Power getting official very soon. Stay tuned..