Two rumored smartphones from Asus and ZTE have showed up on the Chinese TENAA listings. The first one is the Asus X00GD, which we haven’t heard a lot about.

This is supposed to be a budget smartphone with a 1080p 5.2 inch display, a MediaTek MT6750 processor, 3GB of RAM, a 13MP rear camera and Android 7.0 Nougat on board. It would also support dual-SIM and TD-LTE, according to the listing. This device is most likely just meant for China, but we’re not sure about its release date.

The second device to have appeared on the listings is from ZTE. The listing is for a ZTE BV0800, which also has been rumored to feature a 5.2 inch display. Other rumored specs include a Snapdragon 430 processor, 3GB RAM, 12MP front camera and Android Nougat on board. Recently, photos of the the ZTE Blade V8 leaked online and showed a dual-camera setup. 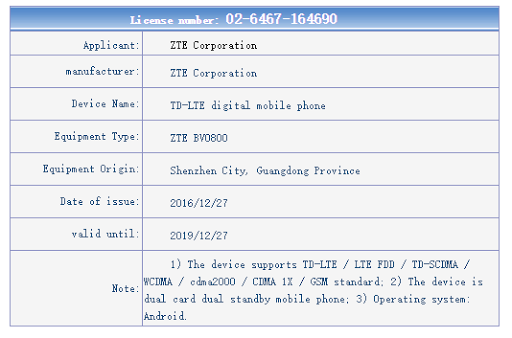 We’re not sure when these devices would be released, but since they have appeared on TENAA, it should happen very soon. Both the devices could be China only, but the ZTE might make it to Indian shores as well.