Update [September 02, 2019]: So, it took some time but after Rogers, Telus has also moved ahead and have updated their ‘update schedule’ for coming days/weeks to remove Android Q (10) from the changelog for the Pixel update that’s scheduled to release on September 03. This may either mean that Telus too took the rumored date as the official date, in which case, the stable Android 10 update may not release on September 3rd. Or, for the optimists among us, Telus got the memo: they shouldn’t be confirming the release date of Android 10 before Google, and thus have merely removed the mention of Android Q from its schedule. In any case, we should find out the truth soon because the 3rd of September is now far now. Here’s the updated the schedule of software updates from Telus.

And the screenshot below is the original one where Telus confirmed Android Q release for September 3rd.

Yesterday, we were happy to see Canadian carriers Telus and Rogers sort-of confirm the Android 10 release date to be September 3rd in their ‘software update schedule.’ But well, we express our doubt about it — that the whole thing isn’t the other way round because the rumor about the September 3rd being the release date originated first, and making anyone in charge of preparing the schedule charts to count on that as the confirmed release date, using the same in the carrier’s own official update schedule.

Turns out it was indeed the other way round. Why, because Rogers just updated its page again to remove the Pixel 3 updates from its schedule. That doesn’t mean the Pixel phones are not getting Android 10 soon, when in fact they will be the first to get the update with or without OnePlus matching them for it, but it does lay a serious doubt on the so-called release date of September 3rd. 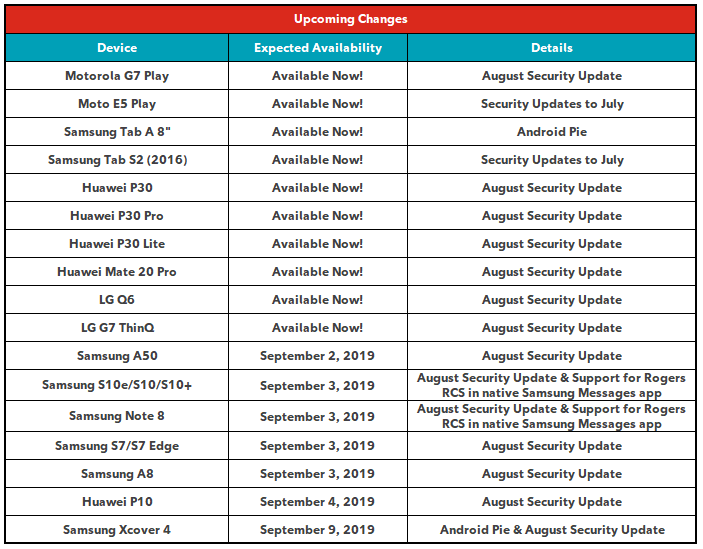 Furthermore, Rogers removing the Pixel devices from their ‘update schedule’ also doesn’t mean Android 10 certainly won’t release on Sept. 3rd. It may just be that the carrier didn’t want to give any date as the release date of Android 10 because this was being taken as the official release date by people around the world. Confirming any date as the official release date would be wrong on carrier’s part unless authorized by Google, so they had have to remove it, even if they know for certain that that’s the date. And that’s the thing!

So, what gives? Well, you still cannot take September 3rd as the official release date of Android 10 update, but it might just release on September 3rd, but Rogers doesn’t want to put that date forward. That’s all. 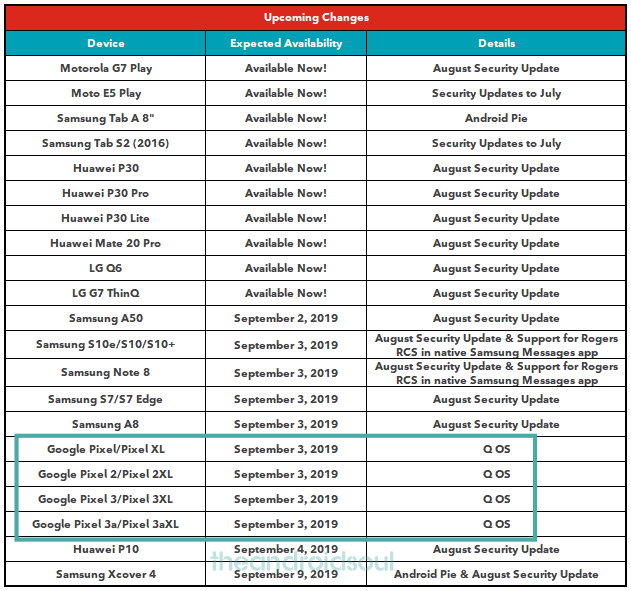 Above is yesterday’s ‘update schedule’ from Rogers that has now been redacted to remove Pixel 3 updates (in order to NOT mention the September 3rd as the official Android 10 release date, we presume).

‘Why Samsung may release Android 10 sooner than you realize‘