Update [December 16, 2016]: The Android 7.0 Nougat update for Xperia X Compact has been released today, and it comes as software version 34.2.A.0.266. OTA has started rolling out for the model no. F5321, and is available in Asia, Australia, Europe and Latin America already.

Update [November 08, 2016]: Sony today announced the Concept program for its Android devices, and has already bestowed the Nougat update on Xperia X within that. So? Well, your buddy Xperia X Compact is in line to receive the Nougat treatment too pretty soon. Even though not supported under the Nougat concept program right now, chances remain good that Xperia X Compact is also included in the program. And if not, you don’t need to worry. Here’s why.

With the concept program, Sony is able to get appropriate feedback of its Android 7.0 Nougat build, gathering all the vital info about hidden bugs and issues whatsoever, thus enabling it to iron out such stuff before preparing the final and stable build for public release. All of this shouldn’t take too much time, meaning Sony should be coming out with the final Nougat update release — at least for the Xperia X — by the end of November, or by mid-December at the maximum. This could be time when Sony decides to release the Xperia X Compact Android 7.0 update too – -and as such, may not really need to include the device in its concept program, which is fine. What do you think?

At the MWC 2016, Sony had announced the new X series of phones. They launched the X, X Performance and the XA at this event, and followed it up with the release of Xperia XZ and X Compact at IFA 2016. If you bought the X Compact, you may be wondering when will your buddy see the day in Android 7.0 Nougat, right?

Well, Sony isn’t the one to drop support for its devices as regards software updates. Unless, you know, it becomes unavoidable (we’re looking at you, Xperia Z3). Unlike Moto G3, that should have been included in the Motorola’s Nougat roadmap but wasn’t, we don’t expect casualties in Sony lineup, and no chance of it with the X Compact.

The Sony Xperia X Compact focuses on providing you a set of serious hardware in compact design. X compact comes is a really nicely designed phone, and boasts a great specsheet too. You’re looking at Qualcomm Snapdragon 650, 3 GB RAM and the impressive 23 MP camera.

But the phone, having been announced the next month after Android Nougat launched, came pre-installed with Android 6.0.1 Marshmallow. This can be expected as OEMs usually take some time to optimize the OS for their devices. But here’s everything you need to know about the Sony Xperia X Compact Nougat update.

Will Xperia X Compact get Nougat?

Following Nougat’s announcement, Sony had come forward and announced a list of devices it would update to Android N. But since the X Compact was not yet announced then, it did not feature in that list.

Later, a leaked Sony presentation had the mention of the X Compact, which means the device will definitely get the Android 7.0 Nougat update.

Xperia X Compact Nougat release: when will it arrive? 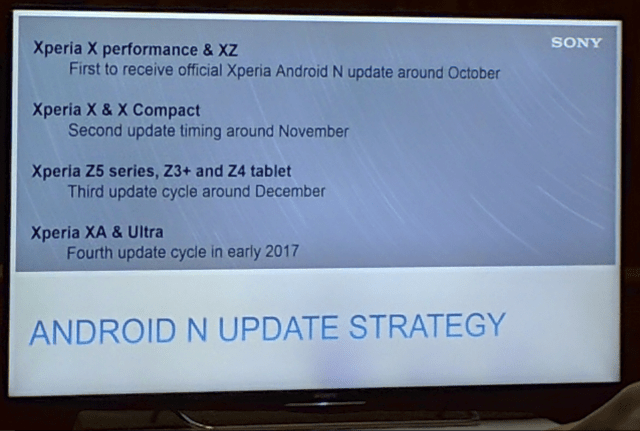 The same presentation slide of Sony that brought us the confirmation of Nougat update, also revealed it targeted date, which is November 2016.

This is in line with Google’s plan as Google had shared the Nougat update with OEMs way before it was officially launched. This has helped the manufacturers in bringing out updates for their devices faster.

Well, yes, now that Android 7.1 is available, we really should talk about it. Even though not confirmed by Sony yet, it’s a given that X Compact will run Android 7.1 in some distant future, probably

Why the delay with Xperia X Compact Nougat update?

If you compare Nougat release with Nexus devices, like Nexus 6P and Nexus 5X, which got the update on August 22, you may feel Sony is cheating you here with delayed updates.

Well, that’s not the case, OEMs need extra time to customize the update for their devices. Google used Nexus 5X/6P for developing the update, so it was quite ready for them. But OEMs will have to cook it for each one fo their phone, and will also have to customize their custom skin in line with Nougat update.

So, in fact, the November release is quite commendable. A good job from Sony, if achieved.

And it also got some solid improvements on the inside too: like new Vulkan UI that makes games look greater than ever. New Doze mode for better battery life, and then there is seamless update that makes the update process more easy by downloading the full update in background.

Those are all new features from Android 7.0, and right now, it’s not known what Sony will add to the mix. Though we don’t expect much, as Sony already made improvements to its UI when it launched the X Compact.

Check out this video to see Android Nougat in action.

Given Sony devices’ history with after-market development, it seems safe to say that later on, CM14 should be available for the X Compact.

Right now, you don’t have any Nougat ROM available. In fact, it’s not available for any Xperia X series device, except the Xperia X. Check out CyanogenMod 14 (CM 14) download page here.

How to Convert your Nexus into a Pixel phone