Samsung Galaxy Watch: All you need to know

After waiting for over a year and a half, Samsung Gear fans weren’t the happiest in the wearable industry as the company didn’t launch the much-anticipated Samsung Gear S4 in 2017, the successor to the 2016 Gear S3, rather, it came in with the Gear Sport at the tail end of last year.

There had been plenty of rumors pointing to a Gear S4 smartwatch but Samsung clearly had other ideas. Of course, the name change is the biggest tweak to the company’s smartwatch lineup and while there’s nothing revolutionary in there, those looking for a new smartwatch with premium features and specs won’t go wrong with the Galaxy Watch.

So, what is there to know about Samsung’s latest smartwatch? Let’s dive in.

Related: How to use your phone and smartwatch as a spy camera with Wear Camera

It had widely been mooted that the Galaxy Watch would come running Google’s Wear OS, but Samsung seems to be keen to push its own software, Tizen OS. In the Galaxy Watch, you’ll find the software’s latest version 4.0, an upgrade to Tizen 3.0 that powers last year’s Gear Sport out of the box.

It comes in two sizes

Unlike its predecessors, the Galaxy Watch has more than one variant based on size – a 42mm unit and a 46mm model. This is basically what happened with the Gear S3 and Gear Sport, although two were unrelated devices, to say the least.

Regardless of the variant you pick, the Galaxy Watch offers the same design language, specs, and features, but of course, there are a few differentiators. For instance, the 46mm variant has a bigger 472mAh battery and 1.3-inch AMOLED display compared to the 42mm’s 270mAh unit and 1.2-inch AMOLED panel. Although the display resolution is the same for both, the duo also comes with different price tags, which is expected anyways.

Both models of the Galaxy Watch have decent bodies that include 5 ATM water resistance, Gorilla Glass DX+, and MIL-STD 810G certification for protection against all kind of rough treatment. 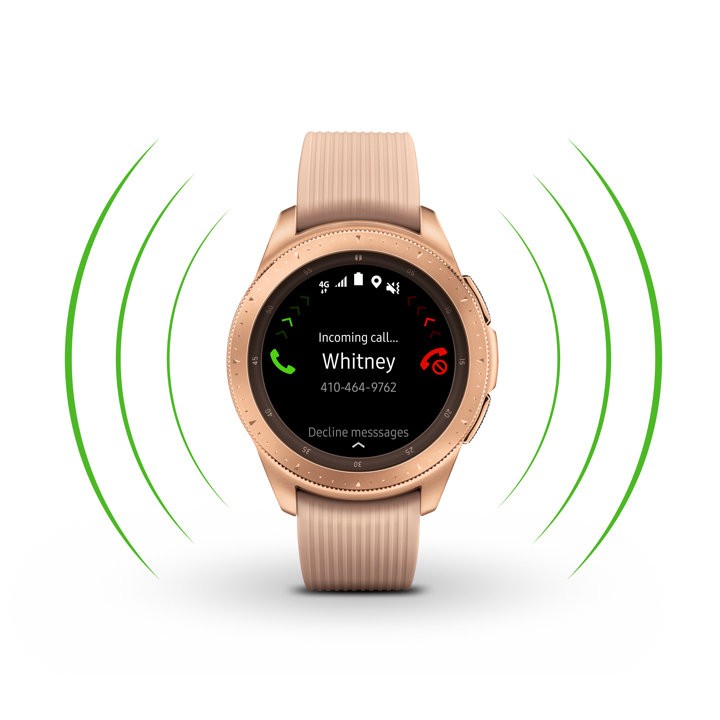 Like its predecessor, the Galaxy Watch also offers an LTE variant. While it’s not clear which carriers will be stocking the Watch, Samsung has already confirmed that the smartwatch will be compatible with at least 30 carriers in more than 15 countries across the globe. Of course, expect the LTE variant to cost a tad higher than the standard model.

Related: How to use your Android smartwatch as a Bluetooth music player

You still get plenty of fitness features

The sound of the name Gear meant that Samsung’s previous smartwatches were largely associated with fitness. Despite the name change, the Galaxy Watch keeps up with the Gear tradition by shipping with lots of fitness-related features, including regulars such as heart-rate monitor, calorie and step tracking, guided meditation sessions and even reminders to keep moving throughout the day.

As you’d expect from a device that is here to help you live better, Samsung’s Health app is present on the Galaxy Watch and can be used to keep an eye on up to 40 different workout sessions, auto-detect at least six of the most common ones and also ships with an inbuilt GPS that keeps you on the grid when making your daily runs.

Samsung Pay is present, but with a catch

The Gear S3 came with support for Samsung Pay, a payment method that has gained traction thanks to the fact that it supports both NFC and MST payments. This impressive feature was ruined when the Gear Sport came to life with only NFC transactions supported via Samsung Pay and to our surprise, the same is happening with respect to the Galaxy Watch.

While this isn’t unusual by any means, the fact that MST payments have been at the heart of Samsung Pay’s growth could hurt the intake of the Galaxy Watch. Only time will tell.

As you’d expect from such a premium piece of hardware, the Galaxy Watch works just fine even when paired with an Android or iOS device. However, one thing you might want to take note of is that in the latter case, you won’t be able to enjoy the services of Samsung Pay.

On stage during the Galaxy Watch presentation, Samsung’s Bixby was mentioned briefly, something that suggests we could see the latest iteration of Bixby 2.0 make its way to the Watch. What remains to be seen is when this will arrive, as for how it will work with the smartwatch, it’s possible that Bixby could take the place of the S Voice and give users the option of interacting with the watch using voice commands.

The smaller Galaxy Watch comes in two color variants of Midnight Black and Rose Gold while the bigger variant has one color option – Silver. On the brighter side, you can pick a Black, Blue or Grey 22mm strap, but the smaller model has even more choices of Black, Grey, Purple, Red, Yellow, Brown, or Beige. Alternatively, you can also pick a non-Samsung strap to go with, which should widen your scope.

As pointed out earlier, the Galaxy Watch will be sold through select carriers like T-Mobile in the U.S. and EE in the UK, but you can also grab one via the official Samsung shops, both online and offline.

Amazon Prime Day in India – Here are the best deals