We had heard from Samsung Turkey that the full rollout of the stable Nougat update for Galaxy S7 would commence on January 17, which is today, and it so happens that users have started reporting the Nougat release for the S7 and Galaxy S7 Edge already. The update is based on Android 7.0 of course, and not 7.1.1 as was rumored long back.

The firmware build of the European Nougat build is G935FXXU1DPLT for the Galaxy S7 Edge, while the S7 would take the G930FXXU1DPLT build number. The best way to get the update right now is to remain on Marshmallow BTU firmware, and then look for the DPLT OTA update. 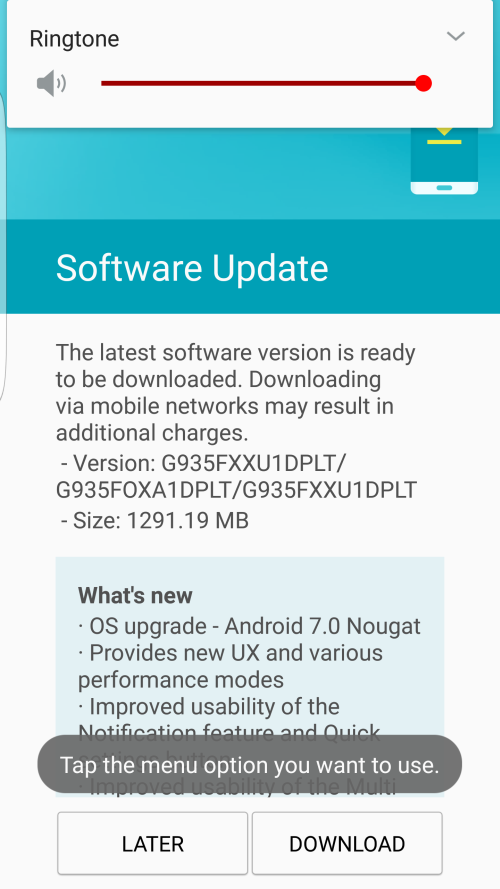 We know many of you have been hitting the ‘check for update’ button tirelessly ever since the clock ticked 00:00, but if you do that smashing now, you have better chances of landing yourself some Nougat sweetness from Samsung as build PLT. It doesn’t matter whether you were beta tester or not.

Yesterday though, there grew some doubt over the stable release of Samsung Nougat update, because it was reported out of China that Samsung has had to deal with some issues with the Android 7.0 build, which is why they may have halted the update.

But now that it’s rolling out, we don’t think there was any significant issues with the update, and even if there were, they may be related to Qualcomm processor, as the Exynos one in Europe is receiving the Nougat update today. For what it’s worth, Chinese Galaxy S7 sets are still receiving the beta Nougat builds as an OTA, which raises doubts over release of stable update there, today and in near future.