Moto M price is out before tomorrow’s release

Update [November 07, 2016]: Another bunch of pics leak out of the Moto M, revealing its Price and any specs that weren’t already. have a look at them in the image gallery below. The price is set at  1999 yuan at some online retailer site, but there is no chance on earth this price will be the one on the box. So, we shall know the correct price by tomorrow when the device releases in China. But yes, the specs are pretty correct in the pics. Update: Okay, as was expected, correct pricing now is part of the listing where one could already grab the Moto M on order, and it’s 1999 yuan. which is around $295, or INR 19,690.

Update [November 02, 2016]: OMG, the Moto M leaks in full. Yup, we now have seemingly all-but-confirmed final spec-sheet along with the live out-in-the-wild pics of the Moto M. Yup, once again from China! Check out the pix in the photos section below, and some new confirmation on the pics right below.

We knew from the AnTuTu listing that 4GB of RAM and 32GB of storage is in the offing here, and the latest screenshots just confirm the deal. The shots, see below, reveal that the device indeed features Full HD display, 4GB RAM and 32GB storage.

Though, look at the screenshot above showing the homescreen, and you gather that ‘OMG! it’s custom skinned’. Yup, sadly, it seems that Lenovo is stamping its OneUI on the Moto M, doing away with the stock UI, which was one reason that many — if not, most — people likened buying Motorola over the competition. Thoughts? Prayers?

Update [November 01, 2016]: With around 7 days left for the November 8 release as per the rumors, the Moto M makes it to AnTuTu benchmark, which is one of our favorite source unofficial official confirmation of upcoming Android devices, Moto M no exception. Check out the image below of the Moto M’s listing at AnTuTu. And yes, this confirms the modle no. of Moto M as XT1662. Continue reading below for more info. 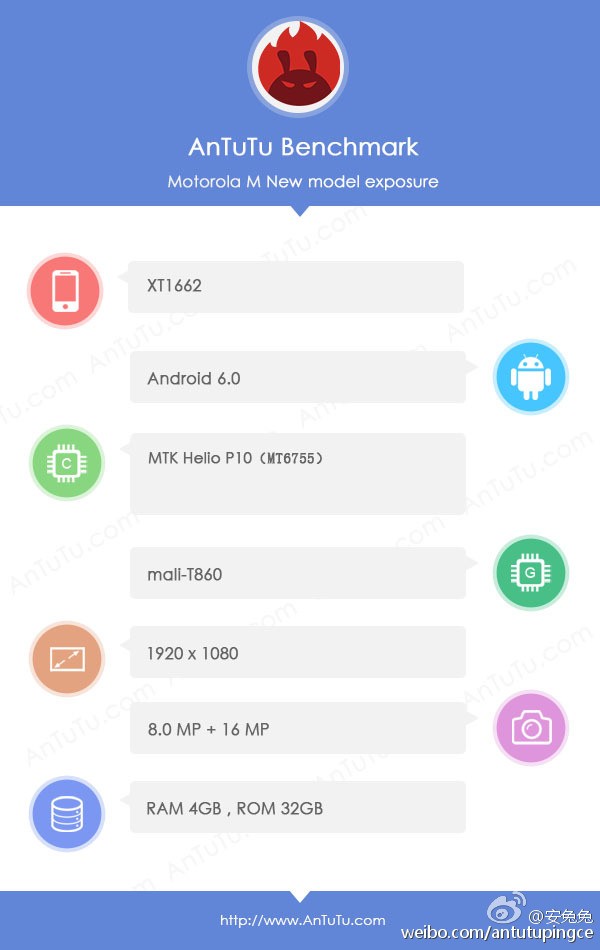 So you have the 4GB of RAM here coupled to 32GB of internal storage, something which we though will be a tad different, as we thought of the 3GB of RAM for Moto M, while 4GB preserved for Lenovo P2. And there’s a Helio P10 processor in the mention here, as opposed to the Snapdragon 625 chipset rumors has us believe. Now, neither rumor (see below) nor the listing are usually incorrect, so we will have to wait for Motorola to announce the Moto M and clear up some things. The listing specs looks to be of Chinese Moto M, or a variant of Moto M, but then you already have the Lenovo P2 for China, which is similaraly specc’ed as the Moto M.

The AnTuTu listing also gives us a glimpse of camera department, where we could expect a 16Mp rear camera, with 8MP sensor taking selfie duties. The model no. of Moto M is XT1662, it’s revealed, while the device is all set to laucnh with Android 6.0.1 Marshmallow onboard, with Nougat coming up as an OTA update in future for sure. You have Full HD display up front, as per the AnTuTu leak.

Update [October 29, 2016]: A leaked pamphlet (above) suggests that the Moto M is up for announcement on November 8, 2016, barely 10 days away from today, that is. Also, it seems that the device is Lenovo P2 for China, while Moto M for the rest of the world. Below, we had specs for Moto M out side China, and for China, which were later brushed aside as that of only Lenovo P2. But now, we think the specs meant for Chinese Moto M, belong to Lenovo P2 only, while those for Moto M rest of world, are purely Moto M specs. 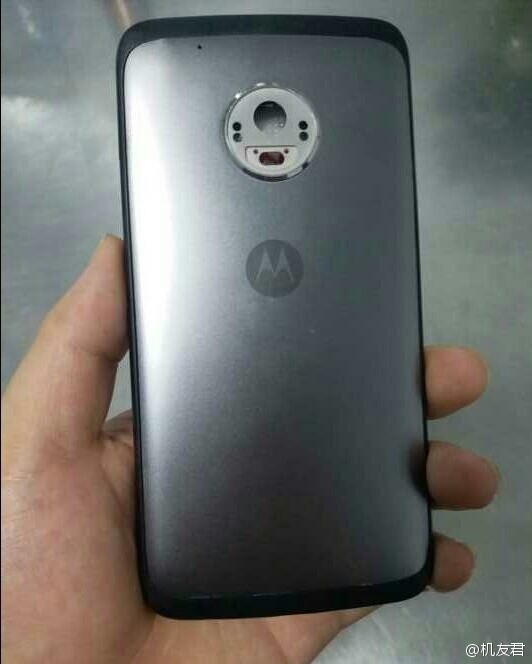 Update [October 28, 2016]: Oh boy, it seems there was some sort of confusion with the leak. What was leaked as Moto M specs has turned out into that of Lenovo P2 actually. Because Lenovo owns Motorola, we think that’s where the confusion began. Here’s a full spec-sheet of Lenovo P2, anyway, and is in no way to be taken as Moto M specs. 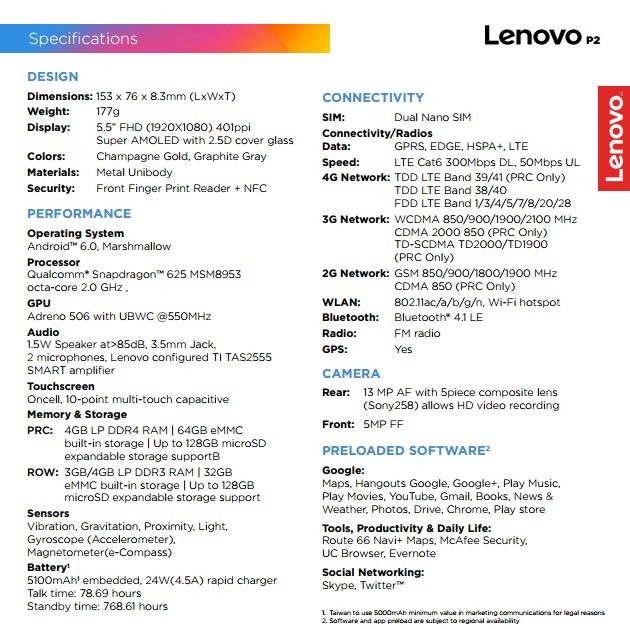 Original article: A new device from Motorola in the moniker of Moto M has been appearing in leaks and rumors for long now, but now we have the its specs and release date in tow too. The Moto M release is expected in December 2016, while look out for the Moto M specs below.

Talking of Motorola Moto M Specs, you have the 2.0GHz octa-core Snapdragon 625 processor keeping the lights and fun on on the device, tied to Adreno 506 GPU, while RAM and Storage differ for China and Rest of the world. Yes, this confirms Moto M won’t be China exclusive.

If you are buying in China, you get 4GB RAM plus 64GB of storage, while outside China, there is 3GB of RAM coupled with a 32GB storage. Both sets will ofer microSD card support of up to 128GB.

BTW, there is also an Moto M Plus in talks, but it’s not clear whether that is a separate device, or just the Chinese variant of the Moto M, given the better specs for the latter.

Now, the highlight feature of the Moto M — 5100mAh battery. That’s whopping 5100mAh, and biggest among popular major older non-Chinese Android OEMs — we count LG, Samsung, HTC, Sony and Motorola in this league. And that’s what you’d want to buy Moto M for.

There is no mention of Moto M camera specifics in the leaked screenshot you see at the top, but one would assume it to be an okay affair, as the focus looks to be on battery. And nothing on display either in this leak.

The Moto M would be running Android 6.0.1 Marshmallow OS out of the box, and is fully in contention to receive Android 7.0 Nougat update in future. If you want a date, well, the Nougat could release for Moto M before the end of February 2017. Talking about the update, here’s some more of our take on Motorola and Android updates for its budget level devices.

Motorola pleased us and its users alike when it started Moto G4 Nougat soak test in Brazil (along with Moto Z Droid soak in US), meaning the Android 7.0 update is really close for release for its G4, which is a mid-range device, which in turn makes the Nougat update all the big deal, at this point of time when most popular smartphones on earth like Galaxy S7 and HTC 10 are still waiting in line.

However, when Motorola denied the update to its Moto G3, an hopes that the likes of upcoming budget-level devices like Moto M will receive the bigger update after an year were quashed, as the company has made this clear by providing Nougat to G4 but note G3 that these devices will supported for only one major update, which Moto G3 got in Marshmallow.

The Motorola Moto M looks set for announcement on November 8, 2016. The release should follow immediately, or soon after that.

If you are buying in China, you get Lenovo P2 in place of Moto M, and that gets you 4GB RAM plus 64GB of storage, along with CDMa support too. 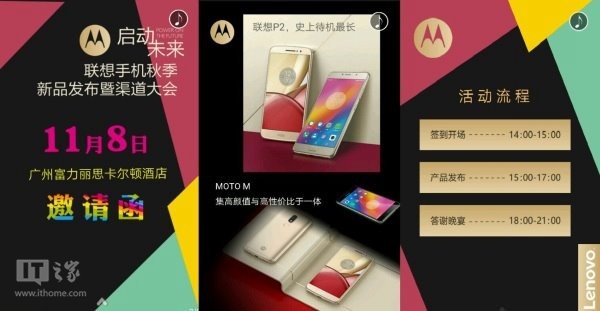 Even though the specs turned out to be of Lenovo P2 and not Moto M, the images above fully purport to be of Moto M.

How to Get Root with Dirty Cow exploit, should work on all Android devices