How good is Ambient Noise on Samsung Galaxy Buds+

Last month, Samsung, once again rewired its Apple AirPods competitor with the launch of the Galaxy Buds+. Looking identical to its predecessor, the Buds+ as Samsung promises offers key improvements which include new dual-driver design, an 11-hour battery, better sound quality for listening to music and improved call quality through the included ambient mode.

We’re here to review how good the Ambient Noise mode is on the Samsung Galaxy Buds+, which is how it defines from the original Galaxy Buds earbuds.

Samsung Galaxy Buds+: What is it

Available for a retail price of $149.99 in the US, the Galaxy Buds+ comes with a dual driver system that has one woofer and one tweeter on each of the earbuds. This is expected to improve audio quality while the additional microphone on the outside of the buds has been designed to improve call quality through the wireless earbuds. The Buds+, however, lacks active noise cancellation which Samsung plans to overcome by providing users with a feature it calls Ambient Aware that offers noise isolation.

As for the specifications, the Galaxy Buds+ feature a 270mAh battery in the case and an 85mAh charge on each of the buds. Together with the charging case, the earbuds will last you for up to 22 hours and without them, you can expect somewhere around 11 hours of playback. Besides that, the earbuds support fast charging that offers 60 minutes of playback in 3 minutes of charging. Other features include support for connection to multiple devices at the same time, a new gaming mode, and Spotify control.

What is Ambient Aware

Users are also allowed to configure how much outside noise they can listen to while Ambient Aware is enabled. The feature is thus useful when someone comes up to you to talk or for preventing any mishaps when you’re walking on a busy street with the earbuds on. This way you’ll never be caught off guard when something’s happening in your surroundings since you will still be able to hear important sounds when listening to your songs and podcasts.

In addition to working when listening to music, the new Galaxy Buds+ are also activated with Ambient sound during phone calls. This means when on a phone call, the feature will be able to suppress background noise like voices of others, winds, cars on the road and more to ensure that the caller is able to listen to you clearly.

How to enable Ambient Aware on Galaxy Buds+

If you own a pair of Galaxy Buds+, you’ll be able to enable Ambient Aware for listening to music as well as on phone calls. You can do so by following these instructions:

Step 1: Download and open the Galaxy Wearable app from Google Play. Once installed, open the app.

Step 2: Tap the toggle adjacent to the Ambient sound to ON position. 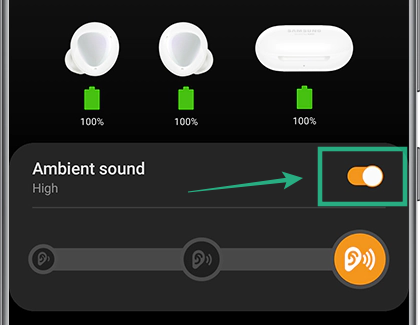 Step 3: Select the intensity of Ambient Aware from the three levels of passthrough. This is the level of outside noise you would want to listen to when listening to music. 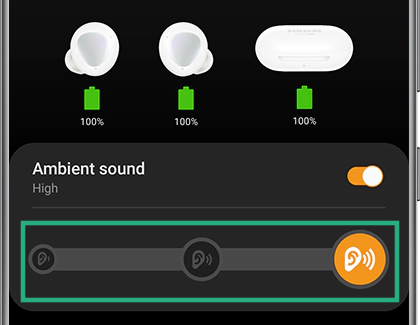 Unlike on the original Galaxy Buds as well as the Gear IconX earbuds, you can switch ON Ambient Aware when talking to someone over a phone call. Here’s how you enable it:

Step 3: Switch ON Ambient Aware for phone calls by enabling the toggle adjacent to ‘Use Ambient sound during calls’.

You can enable Ambient Aware when you touch your Galaxy Buds Plus’ touchpad so that you can listen to the outside noise only when you want to. You can active the functionality by following these steps:

Step 3: Under Touch and hold touchpad, tap on Left or Right to select which earbud you want to activate Ambient sound on.

When you want to activate Ambient Aware the next time, you can do so by touching and holding the earbud of choice.

Ambient Noise on Samsung Galaxy Buds+: Are they any good?

Although it serves a better battery and more functionality, Galaxy Buds Plus’s main selling point is its Ambient Sound feature. That is because the Galaxy Buds Plus’ Ambient Sound works similarly to that of Apple AirPods Pro’s active noise cancellation in terms of audio passthrough. But are they actually any good? That’s what we’re here to discuss in this section. 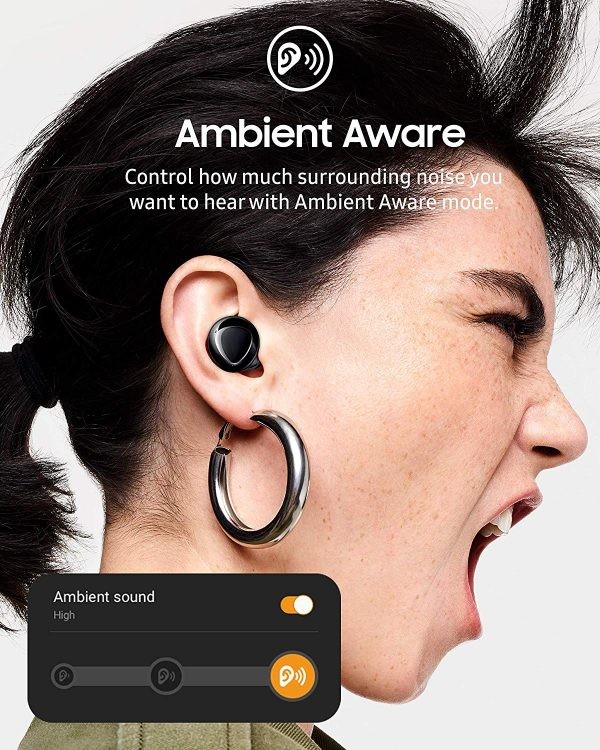 What users have to say

While Samsung promises a huge improvement to Ambient mode through Galaxy Buds Plus, a majority of users had something else to say.

A Reddit user in his review of the Galaxy Buds+ mentioned that the ambient sound feature in the latest iteration has been improved significantly. The user says that the new Buds+ gives a more “natural” feeling of the surroundings and is usable even when it’s set to the lowest intensity. The user also complimented the fact that ambient mode on the new Buds+ also works when you’re wearing just one earbud.

A user on Reddit revealed that while ambient sound works pretty well when you’re outside, the same makes your own voice sound louder, something the AirPods Pro doesn’t have. This means that although Samsung’s Ambient mode does a good job at passing through outside noises, when you’re on a call or when you’re speaking to someone, your voice will be the only thing you’ll hear at the time.

According to a user review on Amazon, while the ambient mode appears to work pretty well, there seems to be some sort of whistling noise that can be heard when using the earbuds while brisk walking or running. Another Amazon user was all praises for the device saying the ambient mode makes sure you don’t have to remove the earbuds when engaging with others.

In a review shared by iamarouet on Reddit, the owner says that activating ambient mode on the Galaxy Buds+ brings back the same issues he faced on his original Galaxy Buds. Enabling the feature while on calls creates a “wisped, hollow sound” to your voice which could apparently have happened from the external microphones that feed your own voice back to you. However, despite this issue, the owner says that the sound quality of calls has improved.

Ambient mode on the Buds+ seems to dampen the sound of songs, thus giving you lesser details. The issue, as reported by a few on Reddit, seems to arise when Ambient mode is turned ON and reportedly, has been present since the first iteration of the Galaxy Buds. The effect seems to create weird noises in indoor places that are usually quiet even at its lowest setting, says an Amazon user.

In a reply to another user’s query, a Reddit user said that even with Ambient sound enabled, the Galaxy Buds+ fails to suppress the sound of the wind, an issue that was present on the OG Galaxy Buds as well. This was complemented by an Amazon user review which also mentioned that using ambient mode on a windy day sounds like “listening to wind through a mic”. The same user also disclosed that with Ambient Aware, the earbuds pick up high frequencies too well, thus making it pretty annoying by feeding you sounds of whistles, snaps, and pops.

An owner of the Galaxy Buds+ said that when on a phone call, the earbuds sound like you’re in a tunnel. Replies to the thread suggest that the issue is present for several users with some reporting that their units give off a metallic sound with distortion. Other replies to the same thread suggested that the issue persists for those who’ve connected their Galaxy Buds+ to non-Samsung devices. 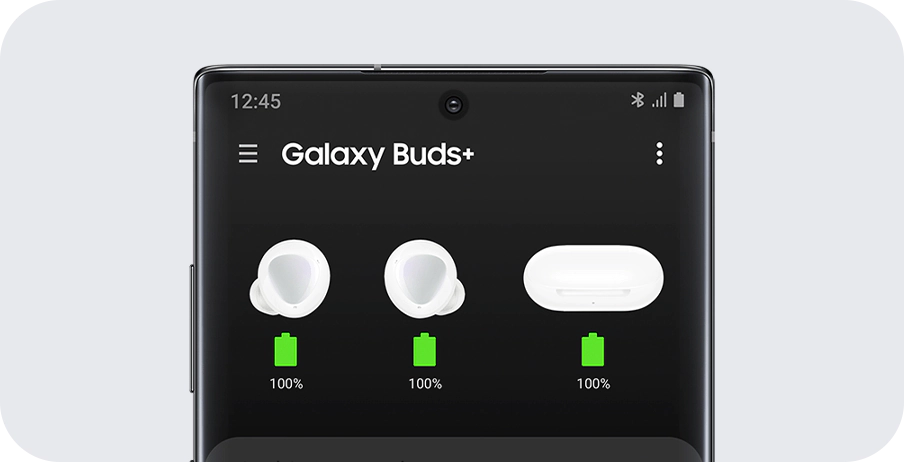 What reviewers have to say

In contrast to users’ opinions, reviewers summed up some good points toward the new Galaxy Buds+.

In its review of the earbuds, The Verge notes that the Korean giant has “done a better job with ambient mode” with the Galaxy Buds+. The review states that the mode now produces a less robotic sound from your surrounding and are also “better suited for voice calls”.

The Guardian detailed that the ambient mode’s lowest setting is “fine for listening out for announcements” while the high setting gave off a similar feeling like normal hearing.

Ambient noise works fairly well with any listening mode when commuting with the new Galaxy Buds+, said CNN. However, the review pointed out that this feature was still NOT “as good as Transparency Mode on AirPods Pro”. The publication also mentioned that with Ambient sound turned off, the earbuds’ passive noise-canceling worked as good as that of active noise canceling on premium earphones.

Android Police dove deeper to learn more about Ambient mode and revealed that the effect was pretty convincing to a level that you can determine where sounds are coming from. The external microphones made sure your voice is heard clearly even in the noisiest environments without raising your voice.

Samsung Galaxy Buds+: Should you buy it?

Samsung seems to have improved several things that were wrong on the original Galaxy Buds with the release of the Galaxy Buds+. The earbuds have received some rave reviews across the internet in terms of sound quality and overall experience with the same level of promise that Apple gives on the AirPods Pro.

They even offer the best in class battery on any truly wireless earbuds and have improved the quality of sound for both music and phone calls with the Ambient Aware kicking in every time you’re out and commuting. But, based on user reviews, Samsung still hasn’t found the means to perfect the way you want to hear external sounds.

While some of the users and reviewers did appreciate that the noise from their surrounding aren’t as robotic as it used to be on the original Galaxy Buds, they’re still no match for the Transparency Mode on the AirPods Pro, which is what the new Samsung earbuds compete with. Besides that, there are still a few issues that need to be ironed out if you’re buying the Buds+ for daily use including overly sensitive touchpads, uneven battery drain, pairing issue and audio distortion.

If you’re someone who’s getting the Buds+ for ease of use and compatibility with multiple platforms and are willing to compromise on these issues, then you should surely go ahead with Samsung’s latest pair of earbuds. If not, it’s best left if you wait for the third iteration of the Galaxy Buds or their alternatives.

Do you own the new Galaxy Buds+ from Samsung? Are you satisfied with them? Let us know in the comments down below.

How to get and use Google Advanced Protection program

How to use your Android smartphone to defeat the procrastinator in you!