Samsung Galaxy Note 8 users recently received an update that brought support for AR Emoji and recording super slow-motion videos, features that are common with the company’s 2018 flagships. The writing was on the wall that the Galaxy S8 and S8+ will get this same feature via a software update too and indeed, Samsung has wasted no time in rolling out this OTA. 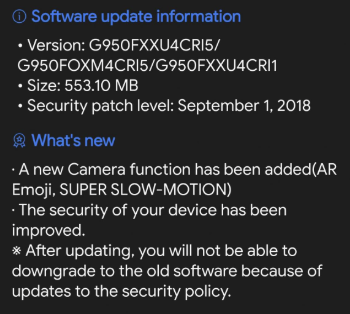 The CRI5 update is airborne and has just started rolling out today, so don’t fret if the OTA hasn’t hit your Galaxy S8 or S8+. Also, the update is targeting the international variants of the S8 duo, but carrier variants in the U.S. and other markets should also join the party sooner than later.