It appears that the Galaxy J7 (2016) has started receiving Android 8.1 Oreo ahead of schedule. The device was slated to be updated on Android Oreo in December but reports have emerged indicating that in some countries the update had started hitting the device in late October itself.

So far, it seems that the handset is receiving over the air update as the Android Oreo firmware update is not reflected in the Samsung Smart Switch App. Seemingly, the update, at first, is rolling out in some European countries.

The Android 8.1 update is laced with Samsung Experience 9.5 skin and comes in J710FXXU5CRJ8 software version. In case, you want to find out if your handset has received the update or not just head on to Settings and then to Software update in your device. 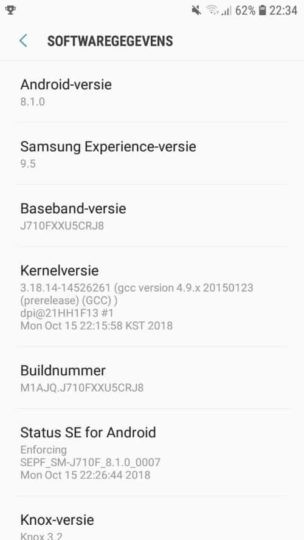 The Samsung Galaxy J7 (2016) was initially launched with Android Marshmallow and last year in August it was bumped to Android Nougat. And now the device is up for its second update since its formal debut in March 2016.

Apparently, the better sales figure of the Galaxy J7 (2016) has prompted the South Korean tech juggernaut to endow the handset with its well-deserved second Android update. Nonetheless, it is not clear as yet if the Galaxy J5 (2016) is also in the pipeline to get the Oreo update.