We already knew that Sprint and LG will release a 5G smartphone in the U.S. this 2019, but details of the specific phone have been obscure until now.

Thanks to notorious leaker Evan Blass, we not only know that the phone in question is the LG V50 ThinQ, but we also have our eyes on an image of the 5G-ready handset that is coming to Sprint later this year.

What immediately stands out is the notched display screen that mimics some of the leaked images we’ve seen for the upcoming LG G8 ThinQ, suggesting that a 3D ToF sensor could be in plans for the V50. Whether the screen will also vibrate to emit sound like the G8 is unclear, but it appears like the notch on the V50 has an earpiece, so we can’t say for sure. 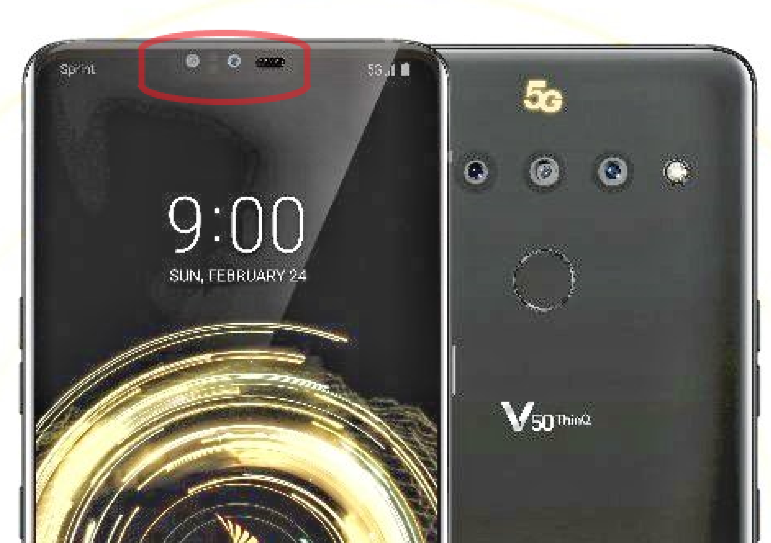 On the back of the leaked LG V50 ThinQ is a tri-lens camera with a fingerprint scanner just below the horizontal setup, further suggesting that even LG’s most premium offering in 2019 won’t have one of the most hyped features to date – the in-display fingerprint scanner. As noted, we’ll likely see a 3D scanner for facial recognition.

Just below the fingerprint scanner is a V50 ThinQ name and further down is the trademark LG logo and name. As if to give whoever buys this phone some bragging rights, the 5G logo that sits above the main camera is in yellow, which should make it easy to spot the phone at a glance.

If any of the recent developments are anything to go by, we should see this phone announced at the upcoming MWC 2019 tech show, which is a little over a week away.