Apple’s AirTag is sweeping through people’s imaginations. Released in April, these small tracking devices can be attached to your precious devices and items to easily find them should they be lost or stolen. Consider the essentials that you are loth to lose – your wallet, car keys, laptop, bags, and luggage. With an AirTag, you can rest easy knowing that you’ll always know where they are.

But it’s not just inanimate objects that people are attached to. Our canine and feline companions are, after all, a big part of our lives. It is only natural then that a tracking device such as an AirTag would be considered apropos to know where our pets run off from time to time.

Let’s take a look at some of the best Apple Airtag collar attachments for your dog (and cat) and under what conditions they are most useful.

Apple Dog Tag: Can you use Airtag for Dog Collar?

AirTags are designed to track your most valuable (and easily lost) objects. And being the domesticated beasts that they are, our dogs are wont to wander off into the wilderness whenever the fancy strikes. It makes sense, then, to use AirTags on their dog collars and track their dillydallying.

Most AirTag dog collar attachments have a holding place designed to secure the AirTag in a way that it doesn’t come undone easily and is still visible for others to see. Even if you’re just getting an AirTag holder, most of them can be clipped on, socketed in, or slipped underneath an existing dog collar without much trouble.

As with dogs, so with cats. Most AirTag collar attachments are designed for both dogs and cats and are indiscriminate to that end. So don’t consider yourself left out if you’re a cat person. Just make sure you get the right size for those little devils.

Related: How Far Can Airtag Reach?

Being that AirTags are still less than a month old, there are not a whole lot of accessory choices that one gets, especially when it comes to dog collar attachments. But that is expected to change as we go along. Nevertheless, even amongst what’s available, there are some spectacular AirTag attachments that you can get for your pets. Here they are: 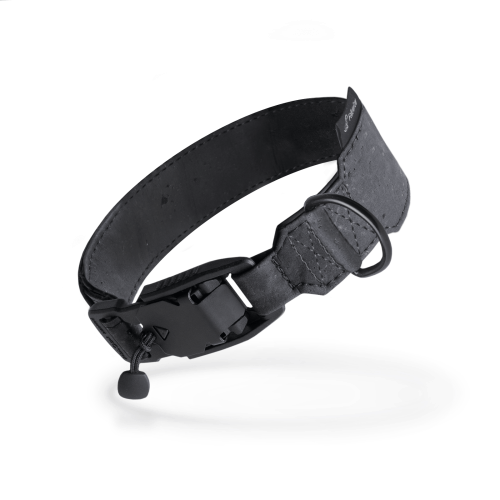 Getting just any regular AirTag dog collar just doesn’t do for pets that are a little unruly; your dog could just as easily rip the AirTag right off in a frenzy. But with FollowPaw’s cork leathered and magnetic buckled dog collar, it’s going to be hard for your dog to remove it. Clearly then, its durability is one of its main selling points. At the same time, its latch is easy to undo for our more dexterous human fingers.

The AirTag can neatly be slotted in its sleeve to keep your AirTag intact and follow your pawed friends around. It is, hands down, the best AirTag dog collar attachment in the market today. 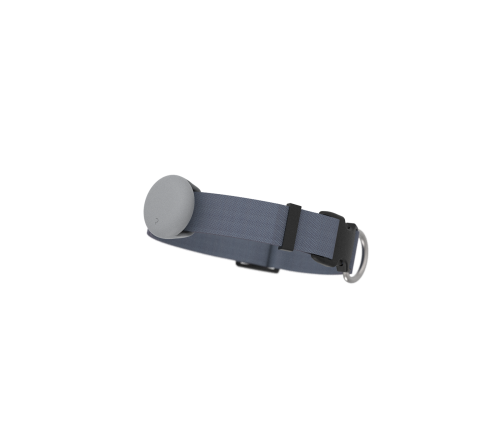 Stepping into the AirTag accessory game, Studio Proper has delivered a riveting and sophisticated dog tag at a decent price. Its rubber-like elastomer design is a unique choice as it allows the AirTag to socket in much more easily (and stay in place, more importantly).

Sure, the rubberized texture does give the dog tag a slight elasticity. But there’s no compromise on the sturdiness, which is quite apparent to the touch. The dog tag can be secured around most dog collars without any trouble and allows the AirTag to do its job without coming undone. 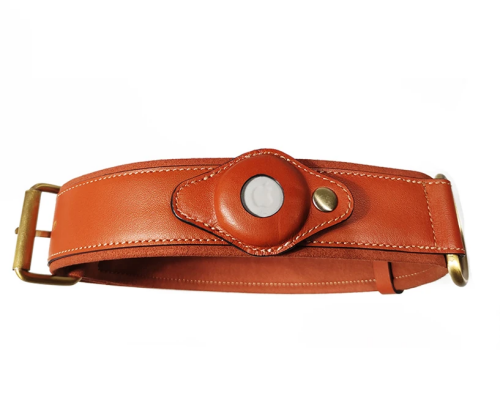 Slightly on the expensive side, this Airtag dog collar can easily be overlooked if one isn’t paying attention to its features and the value for money that they bring.

A stunning, hand-crafted leather collar, CollarTrek has ensured that this accessory has all the makings of a premium dog collar that a concerned pet owner might need. The center of the collar has a copper-snapping mechanism that secures the AirTag, visible enough for others to identify and get in touch with you in case they have a lost puppy on their hands.

Leather is much more comfortable to a pet than other material but people fear their dogs or cats would be able to better it in their scratching frenzies. To ensure that doesn’t happen, the leather on this dog collar is thickly lined and the edges are sealed for durability. For most owners, this would be just a one-time buy. 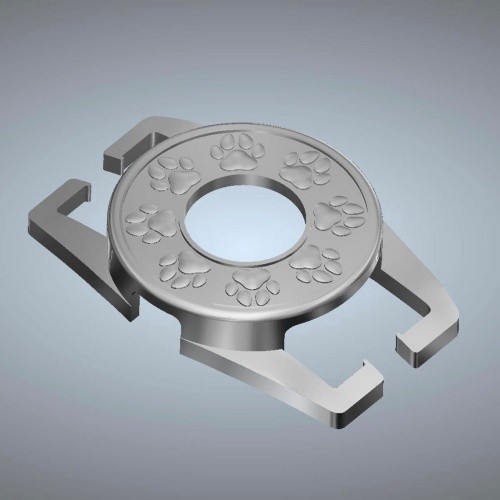 Here is a customizable AirTag holder, built specifically to be hooked on to your pet’s collar. Thanks to its 3M double-sided sticky mounts, the AirTag can be slotted on the underside of the pet tag easily where it remains securely attached until you want to take it out.

The metal construction ensures that the holder stays in place even when your pets engage in rough and tumble play. Even with the durability that a metal object brings, the AirTag holder is quite lightweight so it won’t weigh your dog down.

What’s more! – The holder can further be customized with personal engravings. One could have one’s phone number or the pet’s name on the back – any information that makes it easy for others to recognize and find them in case they get lost. 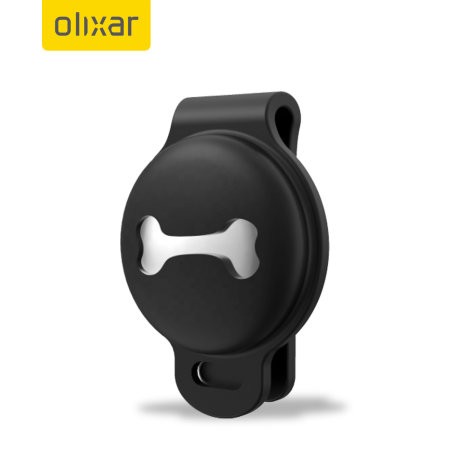 The Olixar Protective AirTags case is quite similar to the previous product, in that it is basically a case that can be slid on to attach to your dog’s existing collar. It is as minimal as an AirTag holder could get. But don’t let the minimalist design fool you. The case is sturdy enough to keep up with even the most unruly pets. Moreover, thanks to its not-so-easily recognizable design, even if the worst comes to pass, dog thieves most likely won’t notice it. 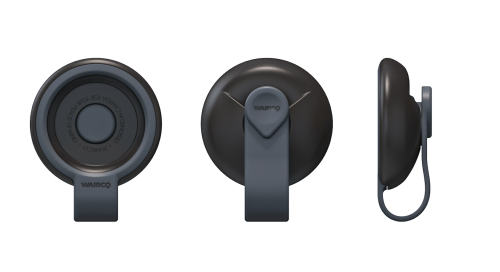 Wairco is one company that specializes in AirTag cases and the sheer demand for their products is testament to their utility. Although not specifically made for pets, the AirTag snap cases work wonderfully well with pet collars.

With it, your Apple AirTags can easily and safely be attached to the collar fabric so pet owners can have some peace of mind knowing that their four-legged companions won’t accidentally (or intentionally) take them out and chew them to bits, not without adult assistance at least. 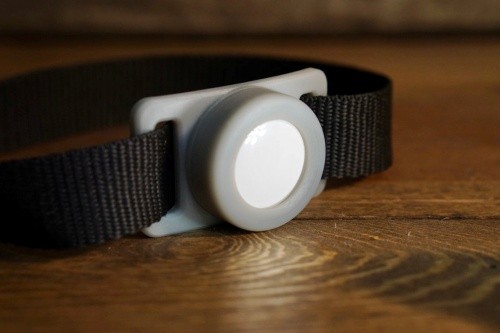 Though not as hard-wearing as some of the other products on this list, this AirTag dog collar is still a safe bet to keep track of your pets. Sure, the slot for the AirTag is made from plastic, but it is nevertheless extremely durable with a nice finish to it. 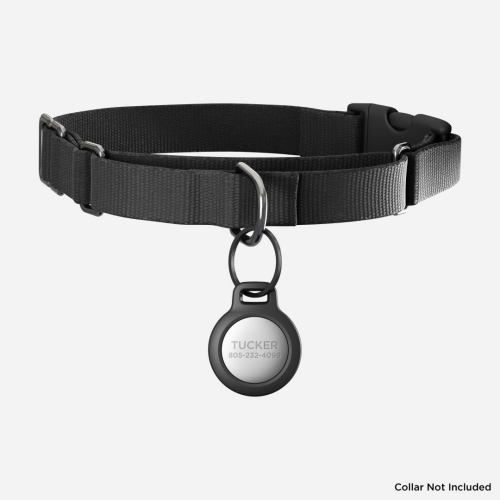 If you’re looking for a premium AirTag dog collar accessory, Nomad’s rugged pet tag is one product that you should definitely not miss out on. Although it is one of the latest releases, this AirTag dog collar has caught on ever so remarkably, not least because of the value for money it delivers.

Rugged beyond belief, this AirTag pet tag is designed with durability in mind. With the AirTag’s IP67 dust and waterproof rating, even if your dog jumps into the pool or wants to go for a swim by the beach (up to a meter deep), the AirTag – and the tag holder – will remain undamaged. On top of that, the TPU over-mold provided a sturdiness unmatched by any other AirTag dog collar attachment.

For an additional $20, you can customize the dog collar AirTag holder with a metal engraving.

Why Apple doesn’t want you Airtagging your pets?

Using AirtTags might seem like the ultimate solution to track wayward pets. But Apple recommends that these not be used for such a purpose. Why? Well, it pays to know how the AirTags work.

AirTags basically rely on Bluetooth to be located. In order to utilize its Precision Tracking feature, the AirTag has to be within the Bluetooth range (about 15-30 feet). If that is not possible, AirTags can be located via the Find My network with its “Lost Mode”. If your dog is near other people, their device can send you a ping with the whereabouts of the AirTag.

But that’s just it. If your pet is not near people, there is no way to establish a connection with the AirTag. So on the off chance that your pet runs away into the woods or away from people, don’t count on the AirTag to be of much use. So, in order to avoid the responsibility of being a proper pet tracker, Apple has made it clear that Airtagging pets is not recommended.

How can the AirTag help with Dog Collars?

So when do AirTags come in handy with dog collar attachments? Only if you live in the city or the suburb with people about where you’re sure the “Find My” network will be able to track your pet. Or if your pet has a tendency to run away to some nearby but concealed space.

Besides a few tracking issues in the wilderness, there are a few limitations to AirTags that you should be aware of when using it with a dog tag accessory.

As mentioned before, the AirTag has an IP67 rating and can sustain exposure to water a little more than 3 feet in water for half an hour. If your dog is trained to swim underwater and does so to fish things out frequently, the AirTags will not hold up.

What to look for in the Best Dog Collar for AirTag?

If you are happy with the considerations and understand the limitations of using AirTags for your pets’ collars, then you can go ahead and get one. But what makes up the best dog collar for AirTags?

Another thing that you should look for in an AirTag dog collar accessory is the AirTag holder itself. It should either be magnetized to allow the AirTag to be secured properly or have clamping mechanisms that ensure that the AirTag doesn’t slide out. You wouldn’t want to zero in on the AirTag’s location only to find that it is lying about somewhere while your dog is still at large.

Being able to engrave your AirTag dog collar attachment might be another feature that you may want to look for. Besides allowing for cute customizations, personalizing the attachment with your contact information allows other people to get in touch with you faster should they happen upon your lost pet.

We hope that you’re able to narrow down from amongst the offered choices. Though Apple doesn’t want AirTags to be used to track living things, many have nevertheless gone ahead to use them to keep their pets safe and secure. As long as you understand the limitations of the AirTag, there’s no reason why you shouldn’t get one for your pawed companions as well.