All major carriers in the U.S. have updated their Galaxy S9 and S9+ handsets to Android 9 Pie and as usual, the unlocked variant is coming in late.

We have just received a tip that an update carrying software version G960U1UEU3CSA8 is rolling out to the unlocked Samsung Galaxy S9 handset in the U.S. For the users of the S9+, the same update is arriving as version G965U1UEU3CSA8.

Both updates, as expected, not only bring Android Pie but also Samsung’s One UI on top of stock Android. Although not the latest version available, you are also getting a new security patch for January 2019. 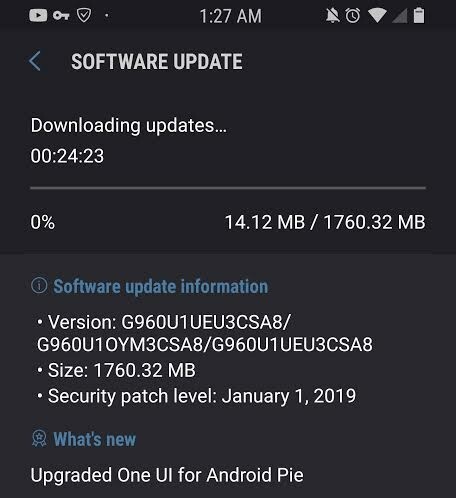 It seems the OTA has just started rolling out to both handsets, so it should take a few days before all U.S. unlocked S9 and S9+ handsets receive the download notification. When it arrives, be sure to connect to a stable Wi-Fi network since it weighs over 1.7GB.

Some of the features the update brings include adaptive brightness, adaptive battery, redesigned UI, better notification management, and so on.

Thanks for the tip, Eko!